These sex positions aren’t so weird. 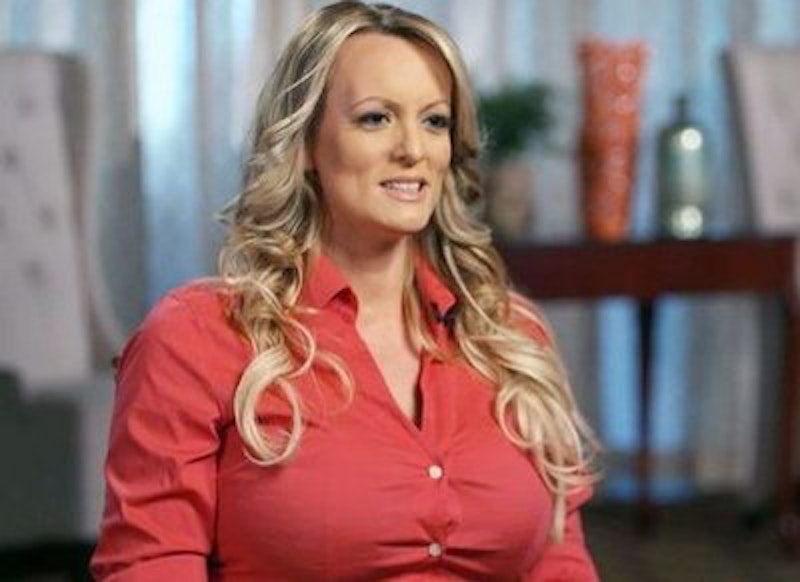 In the wake of the interview with Stormy Daniels about her affair with President Trump, his approval rating shot up to 42 percent, the highest it has been in nearly a year, according to CNN. I conclude that America, too, would do Stormy Daniels if it could. America’s pretty trashy, and it’s getting harder to deny.

Absolutely nothing in the Stormy Daniels interview—no hypothetical sex tape, physical position, spanking with a rolled-up magazine, special “arrangements” in the Donald/Melania marriage—is anywhere near as important as her claim that someone in a parking lot threatened to murder her years ago if she talked about the affair. If the President, who obviously talks and thinks like a gangster, was party to issuing that death threat, he belongs in prison, and everything else is trivial.

Daniels doesn’t think the sex itself was in any way menacing and made a point of saying she’s not claiming membership in the “#MeToo” movement of harassment victims. I applaud her for working in a little nuance there.

There was also some nuance to be found at a great Deadline Club panel discussion this month in Manhattan about reporting in the era of #MeToo, moderated by Jessica Seigel, with participants ranging from Jezebel editor-in-chief Koa Beck to National Review’s Alexandra DeSanctis. Members of the panel seemed to agree that the low point of the movement so far has been needlessly rehashing the ambiguous details of a bad but consensual date with Aziz Ansari.

But Beck and DeSanctis were also in agreement that the long-derided rumor mill can be thought of as a necessary informal, decentralized justice mechanism. That’s good, and to me a reminder that so-called conspiracy theories, too, inevitably get more play in an era of decentralization, as well some of them should. Not all truths arrive on a silver platter with mountains of corroborating evidence.

In a reminder how quickly times have changed thanks to decentralized, informal methods of whistleblowing, moderator Seigel noted that this year is the 20th anniversary of the quashing of a Las Vegas Review article about harassed cocktail waitresses—whereas after the #MeToo hashtag popularized sexual whistleblowing in October, those stories at long last led to the resignation of hotel mogul Steve Wynn this year. (Seigel admitted abandoning a lead of her own back in 2003 about Bill Cosby being an assailant because her interviewee wasn’t willing to go on record using her real name back then. In retrospect, that doesn’t mean the claim was baseless, though.)

Wynn cropped up more frequently on cable opinion shows in recent years than one would think warranted by the depth of his philosophizing, and you have to suspect that this was in part because flattering hotel moguls, who own an awful lot of TV sets, is a really smart move for eyeball-coveting cable networks.

That reminds me that at least two audience members at the #MeToo panel claim they had horrible experiences working for the Fox News bureaucracy—three if you count me, but that’s a story for another time. There are monsters there. Panelist Emily Steel from The New York Times recounted trying to report on Gretchen Carlson’s just-pre-#MeToo harassment accusations from Carlson’s time as a Fox News hostess and how trying to bring that story to light made Steel realize something depressing that may have implications far beyond gender relations: Go up against a large, sufficiently unscrupulous media company and you will face not just angry fans or disbelieving colleagues but a vast public relations machine—and even private detectives—guided by a powerful sense of mission and no sense whatsoever of ethics.

There seem to be multiple monsters in the Trump family as well, so it’s not shocking Don Jr.’s sudden divorce is said to be linked to an affair with singer/model Aubrey O’Day, who has ties to P. Diddy and Playboy.

Still, for all the sleaze bubbling to the surface of our culture, a libertarian, like a responsible #MeToo supporter, is obliged to pay special attention to the distinction between voluntary and violent (or fraudulent).

Thus it should be interesting to see how much attention is given to what Harvey Weinstein’s lawyer says will be Weinstein’s main line of defense if he’s indicted (as appears likely to happen in New York regardless of what happens to him in Hollywood), namely that offering women career advancement in exchange for sex may be gross, but it’s not a crime. That’s a distinction worth making for purposes of moral and legal analysis, and it’s not the same as giving Weinstein your blessing and telling him to carry on as before.

Minna Kotkin, a professor at Brooklyn Law School and the Deadline Club’s remaining panelist that night, might agree with the distinction. Though her feminist sympathies were clear, she was clearheaded and tough-minded about how high some of the legal hurdles are for litigating sexual harassment. For one thing, she explained, the law says you have to report harassment to your employer’s in-house grievance-filing system before you can lob a lawsuit from outside, a daunting prospect if you think the whole organization’s utterly corrupt.

Unlike a typical law professor, I keep feeling more like an anarchist the more these issues come to the fore. The truth can sometimes set us free, and it’s easier than ever to get the truth out (though it may get lost in the din), but most of the big impersonal systems we’ve counted on to keep us safe and render justice, from government and religion to corporate H.R. departments and watchful police, are beyond useless.