Stick a Fork in Mitch McConnell

His impeachment performance was incomprehensible and self-destructive. 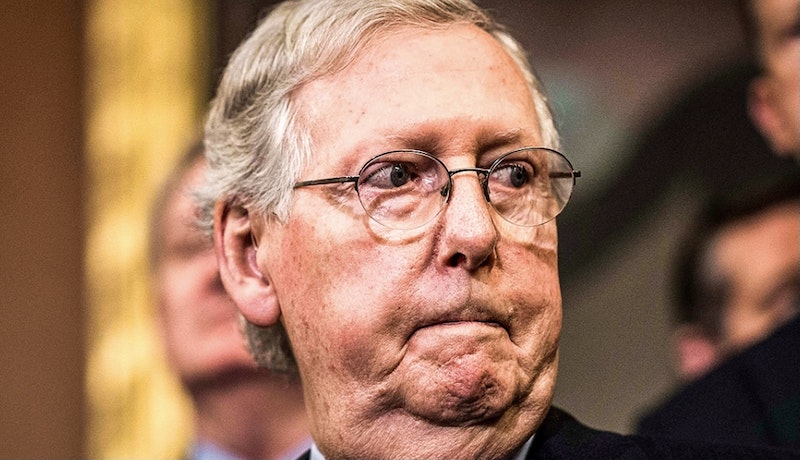 The decision of most of the Republicans who voted to acquit Trump is explicable even if wrong. Perhaps they fear a Trump-endorsed primary challenger. Perhaps they’re cult-of-personality true believers or fist-pumping pro-insurrectionists. But Mitch McConnell's approach didn’t make sense, which surprises me.I've thought a lot of things about Mitch over the decades, but never that he was irrational or working against his own interests. But his vote and speech Saturday can't have been the right approach either as a principled stand or as a compromise, and it seems willfully self-destructive.

Mitch is a particular sort of politician: anti-charismatic and pointedly bland. It's hard to register what he's saying. He's a "legislative technician," the leader as bureaucrat. He's never inspired anyone to do anything, but he's gotten their legislation through or (more frequently) made sure it died. Occasionally, he seemed to profess certain beliefs, but only to the extent that it helped him keep his caucus together or obfuscate the debate. Some people seek love, wealth or happiness; Mitch McConnell, it’s often said, cares for nothing but the confirmation of judges (and his own re-election).

After the vote that acquitted Trump, after his own vote to acquit, Mitch got up and mimicked Jamie Raskin in an outraged and emotional appeal, incomprehensible given that he'd just said “not guilty”: "There is no question that President Trump is practically and morally responsible for provoking the events of that day. The people who stormed this building believed they were acting on the wishes and instructions of their President.And their having that belief was a foreseeable consequence of the growing crescendo of false statements, conspiracy theories, and reckless hyperbole which the defeated President kept shouting into the largest megaphone on planet Earth."

McConnell acquitted Trump on what we might think of as a speculative legal technicality: that once Trump left office, he couldn’t be convicted in an impeachment proceeding. Let's put it like this: he must’ve been looking for some reason or rationalization for acquittal. But how in the world could he have been looking for a way out, if he meant what he said about Trump's role in the riot? Also McConnell's position explicitly constrains the power of the Senate to try impeachments. But supposedly Mitch is an "institutionalist," always concerned to preserve the Senate's prerogatives. If it was a Democrat in the dock, he'd have gone the other way.

In his speech, Mitch asserted that Trump's actions did meet the standard for criminal incitement. Then he said, "By the strict criminal standard, the President's speech probably was not incitement." Then he claimed that that really didn't matter, that the charge of "incitement to insurrection" was an "acceptable shorthand" for the president's actions. And then he said "not guilty."

Perhaps Mitch was bewildered, conflicted and emotionally overwrought. Or perhaps he sincerely believes that the jurisdictional question outweighs all else and that the answer to it (surprisingly) is clear. But whatever he may have thought he was doing, he can’t have been rationally pursuing his own self-interest. Different calculations of this might’ve directed him to defend Trump directly from the charge and keep placating his supporters, or to jump ship once and for all and see if he could whip 17 Republicans to conviction.

But what he did puts him in the worst possible position. His attack on Trump will mobilize that whole wing of the party against him; it might get Trump recruiting primary opponents. He'll be a villain from now on to Sean Hannity and Rush Limbaugh. Perhaps that would be a reasonable political price for making it impossible for Trump to run in 2024. Because if hedoes, and even if he loses, the '24 Republican nomination process will be about nobody and nothing else. Mitch ensured that Trump will be flirting with running, and will be torturing Mitch McConnell, for the rest of their days.

Mitch thinks Trump lost him the Senate. As the January 5thGeorgia run-offs loomed, Trump wasn't talking about anything but stolen elections and the alleged crookedness of Georgia's voting systems. It's very likely that Trump will introduce all sorts of chaos into Republican attempts to re-take the Senate in '24. And if there are new Republican senators, they're liable to support Marjorie Taylor Greene and the like, which I cannot imagine is something that McConnell actually wants.

McConnell saddled himself with Trump for the foreseeable future and also intentionally and pointedly alienated Trump and his followers. I don't think he took the right legal or constitutional approach, but what shocks me is that he can't possibly have been acting rationally in pursuit of his own goals. It can be admirable to ditch your own self-interest and take a principled stand. People might admire that or even reward it politically, on a good day. But Mitch did neither, and now both sides cannot but view him as a pitiful coward.

No one has come out of this process impressed by Mitch's skill or his principles or anything else. I don't think there's much left for Mitch now but a little lingering in limbo before the complete disappearance.