Are you sure you aren’t part of the insurrection? 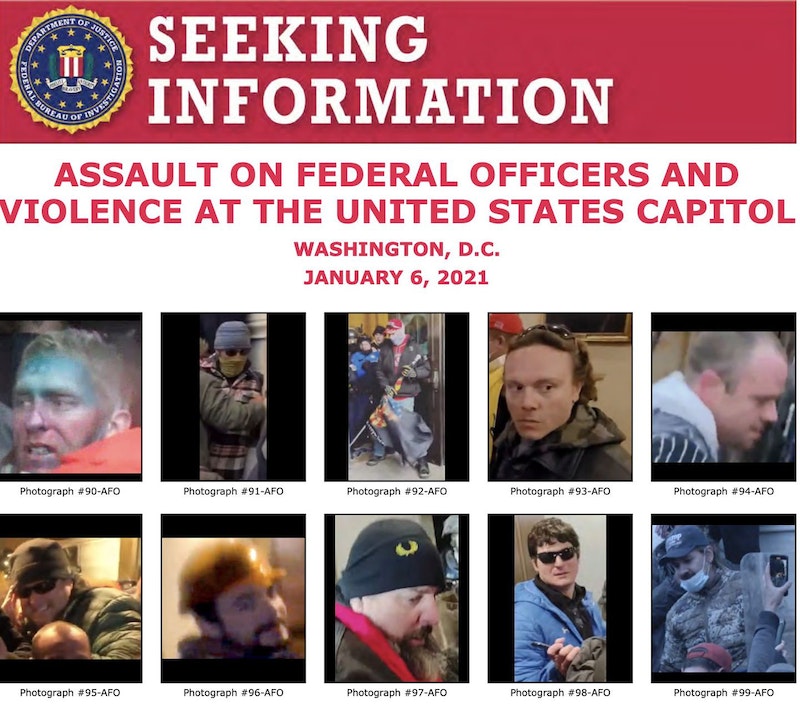 Give government an inch and it will take a mile. It’s never wise, where government is concerned, to grant it permission to do things based on the assumption that those powers could do good “if used wisely and in moderation.” That will not happen. So, when we’re told that the government, including the Dept. of Homeland Security, will now be rededicating itself to the perennial task of spotting and punishing subversives, we should worry.

Framing that task in the post-9/11 language of “domestic terrorism” and “homeland security” shouldn’t be much reassurance, not when you consider how easily the definition of domestic threats expands in the wake of the January 6 Capitol Hill protest—to the delight of politicians in need of an enemy against which they can campaign (and fundraise).

Even as the law itself produces a muted, middle-of-the-road verdict on Trump himself—acquitted but with several defections from his own party—notice that a bipartisan, basic-law-and-order rationale has now been created for monitoring anything and anyone that looks like a threat to the establishment. If not, what exactly are the warning signs that ought to get one on a watchlist these days?

I think it’d be naïve to assume one has to have been waving a gun around on Jan. 6 to be on the establishment’s blacklist. (Trump wasn’t waving one or telling anyone else to do so, and he almost lost his right to run for office again.) Numerous government surveillance agencies and private surveillance companies are plainly champing at the bit to track you, using every technique for doing so they’ve learned since the 2000 launch of Google, the 2001 increase in anti-terror efforts, the 2020 expansion of health metrics and travel-monitoring, and whatever else comes next.

No sane person believes these institutions are just going to ignore you as long as you refrain from setting off a pipe bomb in some neighbor’s mailbox. They’re going to track how you think and let that determine whether they treat you as “potentially” dangerous.

Just think of everything now deemed warning signs of a “radical” mindset (which in itself should not be a crime in the U.S.—just as it shouldn’t have been when the government’s COINTELPRO was infiltrating everything from antiwar groups to the Klan back in the 60s). If you watch this eighteen-minute video on reasons to wonder whether Dominion tallied votes correctly in 2020, for instance, you might get ideas, not wholly dissimilar to some of the ideas believed by some of the people who committed some illegal acts on Jan. 6. That’s practically aiding and abetting! You’d better lawyer up, citizen.

The establishment wouldn’t keep declaring such videos and ideas dangerous “disinformation” (whether about Trump, elections, immigration, COVID, the shape of the Earth, or more and more additional things) and go to such efforts to stop you contemplating them if these ideas didn’t have terrible consequences, would they? They’re just keeping us all safe. (There’s a great scrolling list of additional 2020 electoral oddities at the very end of that video, by the way, assuming I’m still allowed to notice that. Am I infected now? Should I wash my eyes?)

They’ve made us so “safe” that I’d swear I notice a decrease in public debate occurring very recently, after a long period when the question was not so much whether we would have more debate or less but simply how angry the debate would be. Maybe it’s just the lull after the election, the lull after the second impeachment, or exhaustion from a year of COVID lockdowns, but I’d swear the Net is getting quieter the past several weeks, and it might be the chilling effect finally taking hold. The second impeachment certainly didn’t inspire as much squabbling as I’d anticipated, though maybe just because most people think attacking Trump is moot at this point.

Given the relative calm, what happens if, for instance, one posts heretical online comments at this point about whether Trump should’ve been impeached? Does everyone yawn… or does the entire apparatus of the police state add your name to a list of potential armed “insurrectionists” with possible Jan. 6 ties while social media sites helpfully ban you in the name of healthy public discourse?

How many people—level-headed, non-violent people like me—are thinking that the two things they want most out of a U.S. politician are the two things for which the establishment impeached Trump (perhaps not coincidentally), namely (1) the urging of investigations into international corruption like that found (partly) in Ukraine and (2) the encouragement of groups who respect the individual right to bear arms and the right to protest the federal government more than they respect the sanctity of Congress and its evil lair?

Do those people all belong on a list now? Are you happy if they just keep silent? Is that silence “mission accomplished” to your mind?

Congress will greatly influence which people are defined as dangerous in the near future, and Congress includes people like Sen. Mitch McConnell, who voted to acquit Trump but now urges that he be prosecuted as a private citizen; Rep. Eric Swalwell, who when he’s not schmoozing with Chinese communists appears to have faked a young woman’s “verified” Twitter bluecheck in House impeachment graphics to make her pro-Jan. 6 tendencies appear more (dangerously!) influential; and representatives such as Nancy Pelosi who appear to have been asked repeatedly whether extra security was warranted to deal with the Jan. 6 crowds and to have responded no because even in the eye of the storm, the crowd mostly seemed non-threatening—but belatedly wants the whole country to panic.

Now, members of Congress weep on cue for our imperiled democracy (despite the recent quiet and zero sequel sieges), and without tricky Trump to kick around anymore to justify the politicians’ theatrics, I suspect they’re instead coming for you. The people have always been a great impediment to democracy. You just can’t trust them.

Instead of hassling you, the establishment could investigate a thousand crimes per day committed by government itself, but it prioritizes in ways that suit its own interests—and then the intelligentsia scream on cue at the government’s preferred target, all the while telling themselves they’re the ones doing due mental diligence. It’s a sickening spectacle some of us have watched for a half-century now and don’t want to play along with anymore.

On the bright side, they say paradigm shifts happen after people notice enough anomalies that don’t fit the old model. Maybe the little things they tell us only cranks obsess over—like that one cop who died on Jan. 6 being very widely reported to have had his head injured by a fire extinguisher, only for it to come out weeks later that he didn’t and may have had an unusual allergic reaction to bear spray or some other freak problem (and was immediately cremated)—will yet add up in the public mind to a newfound skepticism about the establishment that will dwarf any bombs Trump lobbed at the system.

Throughout that whole process, if it comes, assume the establishment’s list of people they don’t trust and whom they insist you shouldn’t trust either will grow longer and longer—surely including, for instance, independent journalists like some who accompanied the Jan. 6 protestors inside the Capitol and are now being talked about as accomplices of a sort we obviously must not tolerate in the future. Meanwhile, respectable, mainstream MSNBC journalist Nicolle Wallace (whose husband was UN ambassador under George W. Bush, lest you think the establishment’s problem is simply leaning too far left) muses about the possible need for drone strikes on right-wing protestors like the Capitol siege crowd. No FBI visits to her home to ask her about violent thoughts, though, I’m guessing.

And millions of people who agreed that Jan. 6 crowd was fascistic—but who likely expressed horror at the National Guard called out against hordes of arsonists last year—smile and nod as the National Guard now takes up seemingly permanent residence in the streets of Biden’s DC. Thinking becomes incredibly pliable in the later days of a desperate and faltering regime. It must keep up with so many twists and turns.