Sen. Harry Reid is coming out against Nevada's legalized prostitution. 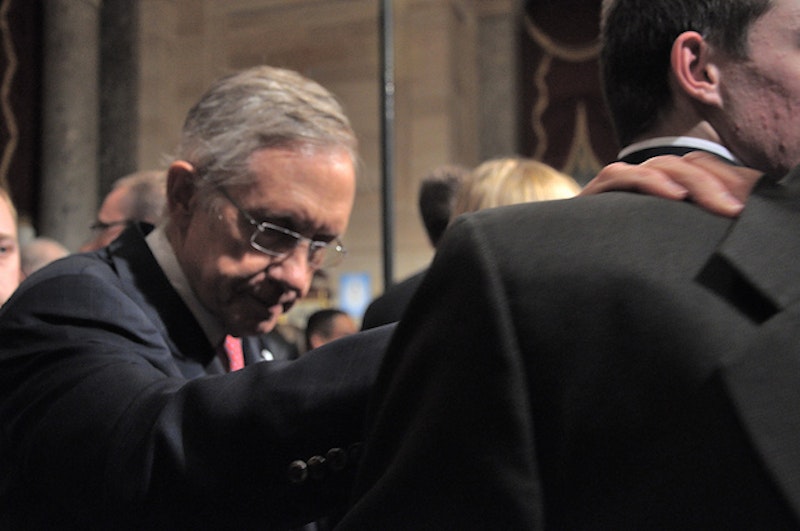 At a joint session of the Nevada State Legislature last week, Sen. Harry Reid suggested that it was time to recriminalize prostitution in the state. Assuming he was objecting for moral reasons and engaging in a bit of political grandstanding, all of the standard arguments for legalized prostitution immediately leaped to mind.

Whether it is condoned by the state or not, prostitution is going to happen, but keeping it above ground protects the client and provider both. Prostitutes are insulated from violence and exploitation by having a safe place to work and falling under the jurisdiction of labor regulations, and customers are better protected from disease through mandatory condom use and required weekly STD testing. There are stringent laws in place to prevent children and trafficked women from working at brothels.
But, listening to Sen. Reid continue, it turns out he isn't ostensibly protesting on moral grounds, but rather on the grounds that legalized prostitution scares away potential business investors.

Okay, I'd like to see these businesses that would supposedly be keen to set up shop in Nevada, if only it weren't for the brothels. Any business owner that puritanical is not likely to overlook the fact that the state is home to a place so debauched and licentious it is known literally as Sin City. Are we going to outlaw gambling, public consumption of alcohol and strip clubs to make Nevada more business friendly? Hardly. In fact, it would reduce the state's appeal for many.

Under state law, only counties with populations under 400,000 in the last census can choose to allow prostitution. Ten of Nevada's 17 counties have done so. Overall, the 24 brothels currently operating in the state employ around 1000 people and have a combined taxable revenue in the tens of millions. This is tiny compared to the billions that gambling pulls in, but for small counties where it's the only game in town, that tax money and the fees associated with running a legal brothel keep the local government up and running. Officials from Lyon and Storey counties have already come out against Reid's proposal, saying, “It wouldn't be a good business move to close down a known revenue generator for what might be.”

The evidence that legalized prostitution deters anyone is anecdotal at best. Even the mayor of Las Vegas, Oscar Goodman, has expressed doubts that it is a factor, saying that it has never come up in his discussions with businesses considering a move to Nevada.

The reality is that Nevada doesn't have a whole lot to offer businesses, other than its lack of corporate taxes and abundant options for adult recreation. What it does have is a dearth of educated workers, a scarcity of resources and a highly volatile economy. Hardly an attractive business environment.

Reid is right that Nevada needs to diversify its economy or it will be hard hit any time the tourist numbers drop, but it's not likely that closing a handful of brothels in the boonies is going to accomplish that. Rather than attacking a minor industry that is an easy target in today's conservative political climate, Reid should be focusing on ways to improve education, encourage the use of renewable energy and increase the efficient use of resources in his state. Then maybe businesses will be tempted to move in, even if the next-door neighbor is the Mustang Ranch.