There is a clear practical as well as philosophical difference between private and public sector unions: One is on the decline and the other on the rise. 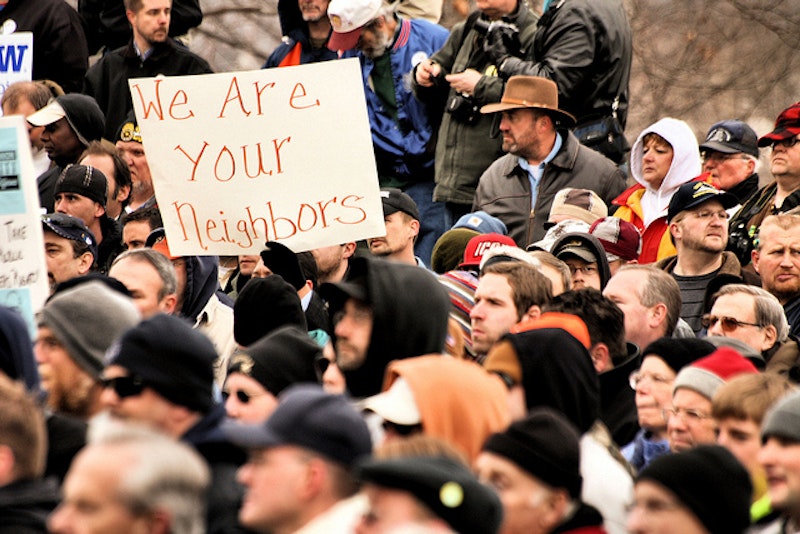 Wisconsin Gov. Scott Walker, a Republican, naturally, is proving that America has some of the best politicians that money can buy. He does so, perhaps unintentionally, by trampling on the rights of working men and women to serve the wishes of the super rich and the organizations they fund to manipulate the political process for personal gain.

Walker is in the pockets of the conservative Koch brothers, Charles G. and David H., the principal contributors to his campaign and the major sources of funds for the union-busting Americans for Prosperity. According to The New York Times, the Koch brothers increased their contributions to Americans for Prosperity to $40 million, up from $7 million. The organization is providing money and manpower in Wisconsin and other Republican-controlled state capitals to stage counter-rallies against public sector unions that are under siege because of budget deficits and under-funded pension plans.

Another conservative anti-union organization, Freedom Works, controlled by former House Majority Leader Richard K. Armey, is dispatching paid workers to state capitals in Florida, Indiana, Pennsylvania, Ohio and Utah to rally against collective bargaining. Tea Party units are hitchhiking onto the battle over public salaries and benefits to establish their bona fides on the issue. And as a companion to the Republican anti-union surge, 13 states are considering right-to-work laws which would free workers from joining unions or paying union dues but still accept the benefits of union bargaining. The goal of Republicans is to dismantle unions as a way of crippling the Democratic party’s major source of funding and manpower and restoring the unbridled forces of the marketplace.

Funny thing. Two years ago, the public was raging against Wall Street for the near collapse of the economy and the rape of public pension funds by investing them in worthless mortgages. But Republicans have managed to magically reverse the equation by shifting the blame away from their pin-striped financial benefactors in the boardrooms and onto public sector workers and the unions that represent them. The public now views government employees—firefighters, police, teachers and bureaucrats across the pay scale—as being over-compensated in salary and health and pension benefits while the captains of industry collect billions in bonuses. Walker, in effect, is protecting banks and bondholders against future losses and defaults by shifting the financial burden to public employees in his state with the threat of massive layoffs.

Walker of Wisconsin, unlike other GOP governors in the same fiscal bind, went a tad too far, though. In addition to demanding give-backs, or take-backs, as the case may be, to which unions have agreed, Scott demanded the elimination of “collective bargaining,” the principal negotiating tool and bedrock right of working-people and their representatives. Wisconsin, always considered a progressive and labor-friendly state, was one of the first states to adopt collective bargaining more than a half century ago. The term was first used in 1891, but the concept of mutual bargaining goes back to the Philadelphia printers’ strike in 1786 and four years later another printers strike in New York in 1790. The idea is deceptively simple: Two opposing sides sit down and negotiate a mutually acceptable deal.

Walker, though tricked into a phone call from a liberal prankster who said he was David Koch, is now trying to enlist other neophyte Republican governors into joining his cause. “There are a lot of us new governors that got elected to do something big,” Walker said. “This is our moment.” Republicans hold 29 of the nation’s 50 governorships and they control 26 state legislatures. But Walker’s party peers in Ohio, Michigan and Indiana appear reluctant to tag along, preferring instead to peaceably negotiate with unions. All that’s blocking Walker’s union-bashing legislation—what he euphemistically calls a “budget repair” bill—from enactment is the defection of 14 Democratic senators who skipped out of Madison and across the state line to the safe warrens of Illinois, beyond the reach of Walker and his state troopers.

But the manner in which Walker has framed the budget balancing issue has left no doubt that his strategy is more of a union-busting effort than a mere budget-balancing act. The public sector unions in Wisconsin, mainly the Service Employees International Union (SEIU), have conceded to Walker’s every financial demand except the elimination of collective bargaining. According to reports, the amount the unions are willing to concede is more than enough to satisfy Wisconsin’s current fiscal gap of $136 million. It is here that Walker’s subversive effort intersects with the Koch brothers’ interests. They control a privately-held $2 billion company called Koch Industries which brackets oil, gas and paper businesses, and who knows what else, across the country, and at one time even on Maryland’s Eastern Shore.

To be sure, there is a clear practical as well as philosophical difference between private and public sector unions. One is on the decline and the other on the rise. Private sector unions have their origin in fighting greed at the top and assuring a share in the bounty of business for those in the lower ranks who do the work. Public sector unions focus more on benefits and security and often are paid in extra holidays and other fringe benefits instead of hard cash. Contrary to public belief, government workers are not paid swollen salaries that far exceed paychecks in the private sector. Most studies show that government workers actually earn less than comparable jobs pay in private business.

But no matter how you slice it, unions play an important role in the nation’s economy. They provide, as best they can and within the law, a balance between the haves and have-nots, assuring at least a modicum of redistribution of wealth within the economy and assuring the money remains in motion and not stuck in fat-cat bank accounts where it does little to create jobs and stimulate economic activity.

In Maryland, for example, labor unions, public and private, have always enjoyed mutually beneficial relationships with government. The AFL-CIO claims there are about 450,000 union members in Maryland, which along with government workers at all levels and blacks makes up the base of the Democratic party. The Building Trades unions have always been especially generous contributors to Democratic candidates and have been rewarded with billions in public contracts along with other special benefits such as the prevailing wage, signed into law by Gov. Marvin Mandel. And Montgomery County is the only county in the United States where labor representatives are members and officers of the local Chamber of Commerce.

Until Parris Glendening became governor in 1994, state employees had the option of joining what was largely regarded as a shop union, the Maryland Classified Employees Association. Glendening became the first Maryland governor to actually ram through collective bargaining for public employees and established SEIU and AFSME as bargaining units for public employees. In recognition, John Sweeney, then president of the AFL-CIO and a Montgomery County resident, was extended the unusual honor of a seat on the House of Delegates’ floor during a Glendening state of the state address, and Glendening’s son, Raymond, was awarded a job as a union organizer.

And even in Maryland, the wealthiest state in the nation with the second largest number of millionaires, state workers are being asked to contribute more to their pension and health plans to help offset a budget deficit and pension fund shortages. And there hasn’t even been a hint of an assault on collective bargaining, an instrument of labor that Gov. Martin O’Malley, chairman of the Democratic Governors’ Association, has said he supports and couldn’t get through the General Assembly if he tried.

Walker’s success and the unions’ future are mutually exclusive. If he succeeds in wiping collective bargaining from Wisconsin’s laws, every union in every state in America is under threat of extinction. And if the Wisconsin experience authors nothing else, it proves that nothing comes between good friends like good money.