Believing Your Own Propoganda

Wisconsin Gov. Scott Walker is merely one of the public faces of corporate fascism. 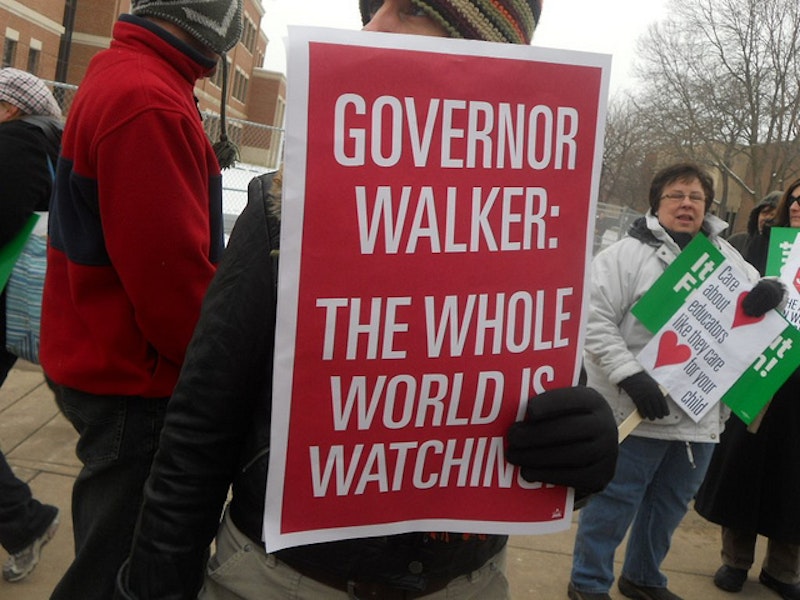 The Koch prank call reveals much about how unfettered capitalism corrupts and brainwashes people. The 20-minute conversation between Wisconsin’s Gov. Scott Walker and a blogger posing as David Koch exposes how our corporate state turns its subjects into callous and self-absorbed zombies.

As in his public addresses, Walker expresses no concern for the harm he intends to inflict on people. The protestors are nothing more than rabble rousers bent on stealing from the rich and worthy, bankrupting the state. Their demands are unjust; their suffering irrelevant; their voice of resistance must be ignored and ultimately silenced. Those slated to lose thousands in health care and retirement benefits never deserved such largesse in the first place (although it is true that Wisconsin’s legislators stand to lose as well, union members can’t rely on David Koch to take them “to Cali and show ‘em a good time.”). They contribute nothing to society. And now they must be barred from retaining the basic right of collective bargaining.

Of course all this is done in the name of fiscal responsibility, a desperate effort to close the budget gap of a state that’s “broke.” And Wisconsin’s teachers earn more than their private counterparts anyway.

These talking points are cynical and dangerous. First, according to Politifact, Wisconsin’s shortfall is “not historically large,” though it must be addressed “in some fashion.” Walker never even considers solving the deficit problem by raising taxes on the rich—only the poor must pay. And an honest comparison between Wisconsin’s teachers and private sector workers—one that takes into account age, education, salary and benefits— shows that in fact Wisconsin’s teachers earn almost five percent less in total compensation than all private sector workers. Walker is merely a pawn used by the power elite to confuse the working class into blaming socialists and labor unions for destroying the American dream, distracting them from focusing on the real culprits—the super rich who pay ridiculously low tax rates and have steadily hacked away at the safety net.

Consider: in the 1940s, fresh off the New Deal, almost half of the workforce belonged to unions. By the 1970s that figure fell to 25 percent. Now, only roughly 12 percent of the workforce is unionized, and for the first time most belong to the public sector. This is no coincidence. As we steadily marched towards unchecked capitalism the power elite forced Congress to crush labor by impeding its right to form unions through the Taft-Hartley Act of 1948 and defeating the labor law reform bill of 1978, among others.

President Ronald Reagan exacerbated this trend by firing striking air traffic controllers and making it politically expedient to lower top bracket tax rates, framing the measure as a moral imperative, lest Big Brother steal everyone’s hard-earned pay and prevent millionaires from buying yachts and mansions. Between the New Deal and Reagan the top one percent paid 70 to 90 percent income tax rates; by the time Reagan was done it was down to 28%, never again to rise above 39%. And it probably won’t return to pre-Reagan levels even though we owe $14 trillion in debt because the corporate masters who control this country don’t want that since it would limit their exorbitant short-term profits (this also explains why we will likely never free ourselves from fossil fuels).

It’s ironic that Walker sees his stance as analogous to Reagan’s union-busting policy, which marked “the first crack in the Berlin Wall” because the Russians knew from then on that Reagan meant what he said. Whether that’s true or not is irrelevant because both politicians cause(d) massive domestic damage by (perhaps unwittingly) doing the bidding of their corporate overlords.

But forget about the unfair tax rates and declining power of unions. The real issues at hand are rising entitlement costs and budget deficits created in part by the sub-prime mortgage crisis. We are told that unions must contribute more towards health insurance and pension funds for the same reason that all Americans are told they must pay higher premiums and expect further spending cuts and reduced benefits: health care itself is becoming more expensive, and time has come to pay for Americans looking to receive handouts.

What the mainstream media generally won’t tell you is that, as Wendell Potter, former CIGNA PR executive turned whistle-blower explains in Deadly Spin, “In February 2010 … in twenty-four of forty-three states … the two largest insurers had a combined market share of 70 percent or more … health insurance companies have used their enormous size to engage in anticompetitive behavior, rig the system to impose unaffordable premium increases, and deliver massive and growing profits for themselves and their shareholders” (137). This mirrors the manner in which those very same shareholders have hijacked the economy over the last 30 years, creating endless boom-bust cycles that have culminated in the sub-prime mortgage crisis and bailouts. Now we are expected to pay higher premiums and receive fewer benefits so they can go on reaping exorbitant profits until the system totally collapses, which could very well happen soon.

It’s probable that none of this has occurred to Walker, who, as the prank call proves, totally believes his own propaganda, much of which has been exposed by Politifact. He represents a particular breed of politician, one that presumably could emerge only in a system of unfettered capitalism. He’s been so brainwashed by the myth of the free market, like most of the population, that he cannot grasp the full implications of what he’s doing. This is why he didn’t flinch when the fake Koch asked him if he wants to “plant some troublemakers,” objecting not on ethical grounds but because the scheme might backfire.

Even when he defended his policy he barely mentioned whom it would help and how it would benefit the population—he just went on and on about how great he is and how most people love him, despite what his “liberal” detractors say. And this is no surprise, since he’s been trained by American culture and the political process to care only about self-aggrandizement. Helping the poor and needy does not come up. And all this is justified because the unemployed and underemployed want to rely on overly generous handouts, and, in the words of House Speaker John Boehner, “don’t want to compete.”

As a former adherent to free market fundamentalism, it’s taken me a long time to transcend corporate propaganda and understand how the system works. We all need to recognize that the power elite have apparently lost interest in controlling the masses through the old combination of doling out enough benefits through public programs to keep the working class at bay and employing the mass media to reinforce corporate/capitalist propaganda (though the latter tactic remains in full force.)

Walker is merely one of the public faces of corporate fascism, although his is perhaps less pleasant to look at than the commercials selling us phony health care and investment plans. But, unlike the Democrats who have by and large sold their souls to corporate overlords (Barack Obama and Bill Clinton, for example), taking massive Wall Street contributions and returning the favor by crushing the safety net (NAFTA, repeal of Glass-Steagall) and preserving the system of unchecked capitalism a little longer (bailouts, health insurance mandate), Walker does not have to be bought. Like Newt Gingrich, George Bush and now the Tea Party, he represents a new phase for the power elite—one characterized by gross incompetence; the corporate masters who exploit people all over the world for cheap labor have unlearned how to keep their own population satisfied enough to continue to ignore the relentless capitalist machine that treats humans like commodities for the purpose of maximizing short-term profits. Those in charge now think they can treat Americans with the same callousness and brutality with which they enslave factory workers in China and third world countries.

There is some validity to the notion that when unions obtain too much power they engage in a similar process of self-destruction by demanding exorbitant wages, which ultimately bankrupt businesses or by neglecting their work because they know they’ll never be fired. But this is more exception than rule, and in any case we need strong unions to prevent corporations from abusing their employees. That the Wisconsin protestors have capitulated on reduced benefits even though it is the for-profit system that has placed them in their predicament illustrates the extent to which labor’s power has diminished.

The fight for collective bargaining is the working class’s last gasp, whether they know it or not. Let’s hope that this expands into a broader movement to radically reform the system, though it might be too late. It’s up to Americans citizens to make sure we know who the real enemy is and resist by demanding measures such as public health care, public energy systems, robust financial regulation, and an end to war-profiteering campaigns in the Middle East.