Bias Within the Rainbow 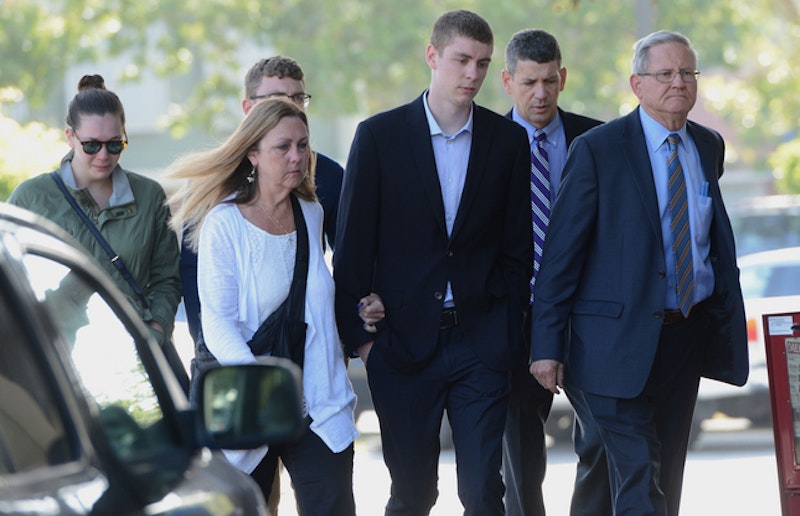 Are you ready to think about Brock Turner again? Neither am I. But I promise it’ll only be for a little while, because the problem I really want to focus on today isn’t with Turner, his clueless dad or the biased judge who gave him that laughably short sentence for raping a fellow student. No, I’d rather think about how this case has exposed a blind spot for my fellow leftists.

There have been accusations of hypocrisy hurled at conservatives since Turner’s sentencing gained international infamy. With all the media frenzy around bathroom bills and right-wing talk of transgender people literally opening the door for sexual assault, it seems unthinkable that, when faced with a real public rape case, the offender would get off so lightly. So I’ve seen plenty of Democrats go off on Facebook about this Republican double standard: “We need to protect women from bathroom predators, but if they’re behind a dumpster, you’re on your own.”

There’s a problem with this line of thinking, though: Judge Aaron Persky, who handed down the Turner verdict, is a Democrat. Sure, he’s not listed as one now, since Santa Clara Superior Court judges have no official party affiliation. But when running for judgeship in 2002, Persky garnered endorsements from influential Democrats like Mike Honda and former San Jose mayors Janet Gray Hayes and Tom McEnery, not to mention the Santa Clara Bar’s LGBTQIA “Rainbow Committee.” (As has been noted, Persky ironically ran with a “tough on rape” plank in his platform.) After losing the election, he was appointed to his position in 2003 by Gov. Gray Davis. His Democratic bona fides are pretty solid—not to mention his biggest defender against the growing recall initiative, Santa Clara D.A. Jeff Rosen, is also a Democrat.

That’s not to say Republicans haven’t said some unfortunate things about the Turner case—former Republican federal prosecutor Margaret Quinn said Turner’s mistake was “drinking excessively to the point where he could not fully appreciate that his female acquaintance was so intoxicated,” not, you know, rape. But Persky himself, whose concern over jail time’s “severe impact” on Turner kicked off this whole controversy, is not among the far-right bigots who oppose transgender civil equality.

This is the blind spot that concerns me: in our attempt to circle the wagons and defend against outright discrimination and creeps on the right, progressives are often too willing to ignore the actions of those on the left—or try to pin them on someone else. It’s easy to say that victim-blaming only happens on the Republican side, but is that really the case? Common knowledge states that the GOP is the party of white male privilege, but isn’t a Democrat guilty of upholding systemic inequality here? Why are we calling a spade a sexist, conservative asshole when it’s clearly a liberal (gardening) tool?

It’s especially troubling to me because of the connection to trans issues. For decades, transgender needs have been pushed aside to make room for those of cis gay men and women. When we call out bias and transphobia within the rainbow, though, we’re silenced. Recently, my local Pride Center fired its only trans board member, made the board up entirely of cis men, and prohibitively rescheduled its trans support group; protests were met by glib corporate speak (”Sorry you feel that way, chums”) and suggestions to “leave work early” to make meetings. The rescheduling was ostensibly to make room for more youth programming, during which time trans people are to be discouraged from coming to the Center—which smacks of the same spurious claims that transness is a “danger to children” we’ve come to expect from the far right. It’s disappointing to face more insidious obstacles from within one’s own community, but not very surprising. Some of us are used to it.

So let’s stop pretending that this is a left-versus-right issue. Instead, let’s face the fact that Persky’s actions are symptomatic of structural white patriarchy, which belongs to both sides of the aisle. If we’re going to change or abolish the system, we’re going to have to stop thinking that either Democrats or Republicans are friends of the people. They are friends of power.

Besides, if you want proof that the Republican establishment doesn’t care about sexual assault, just ask Dennis Hastert.