Show Us Those Raves for Trump’s New Tone

Another skimpy meal served at the table of Proof. 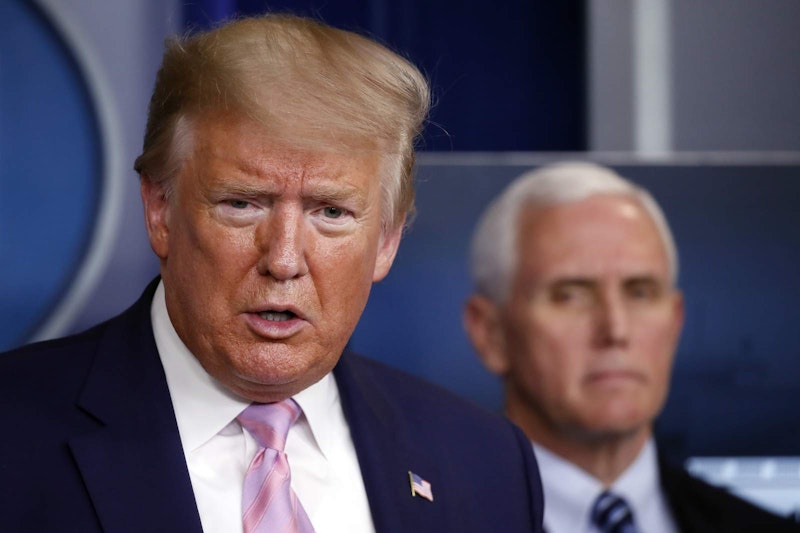 “Trump sounding different today. Scale of death appears to have changed his tone, at least,” tweets Eric Lipton of The New York Times. He notes a development, then adds a wan “at least.” Where’s the praise?

From Jake Sherman of Politico, another tweet: “This is an absolutely new message and new tone from Trump.” That at least has “absolutely,” a hand-flapping sort of word. Politico’s man, taking the house tone, is breathless and important. But he doesn’t say or imply that the line is more than a line, or that Trump came off especially well delivering it.

We were told quite plainly: “raves from a host of political commentators.” David Roth, writing in The New Republic, says that’s what resulted when Trump changed his tune about the coronavirus. It doesn’t look like it. Roth’s article has sluices rolling, frothy scorn over those press dummies. But the quotes that come along aren’t much. There’s Lipton and Sherman, and then this from Joe Biden: “Why doesn’t he just act like a president?” To Roth, this means that Biden “seems incapable of letting go of the idea that Trump might somehow flip the Become President switch.” I’d say Biden just can’t believe how incredibly bad Trump is at his job. If there’s an idea involving Trump that Biden can’t let go of, it’s that Trump will soon stop being president and Biden will take the job instead.

Here’s another non-rave Roth pushes as a rave: “Without a doubt one of the most kind of emotional moments we have seen in a political speech like this in quite some time.” That’s from Anderson Cooper on CNN; he’s reacting to the first Trump State of the Union, and specifically to the honoring of a Navy Seal’s widow. What he has to say sounds more like appraisal than anything. Roth offers Dana Bash, also of CNN and reacting to the moment with the widow: “The most presidential of manners that we have heard from Donald Trump to date, period.” This is limited. To paraphrase: As Trump behavior goes, tonight’s behavior was the most presidential.

The best quote for Roth’s case is one he leaves out, this classic from Van Jones: “He became President of the United States in that moment, period.” That remark really is foolish, since it confuses lasting change with a moment’s impression. The others just say a big moment was a big moment. Roth argues that the press cares too much about moments, about how a politician seems (he makes a clever point in comparing reporters to recappers of TV shows). For instance, he says, they might’ve pointed out that Trump’s blundering had killed the Navy Seal. I don’t know if they brought that our or not. But Eric Lipton’s article in The New York Times has plenty of background. On Trump and the coronavirus situation: “he continued to rewrite the history of his handling of it.” And: “The president did not explain on Tuesday why testing was so slow, nor did he explain why he waited to recommend canceling large events,” and so on. It’s a 70-word paragraph about Trump’s dumb choices, and it ends with “if he understood all along how bad the situation could get.”

True, all the people noting Trump’s new line should’ve mentioned his one earlier bout of seriousness about COVID-19, a shift that ended when he talked about reopening for Easter. Lipton’s article could’ve dropped its reference to a “grim-faced” president “coming to grips” with the crisis, since “coming to grips” is mindreading and Trump had begun babbling self-involved foolishness before the briefing was done (as both Roth and Lipton’s article point out). But where are those raves? Why talk of a press corps falling over itself when what we have is a clumsy instrument trying to register a fitful situation?