Last night's Republican debate was a nice reminder that they don't call it the Grand Old Party for nothing. 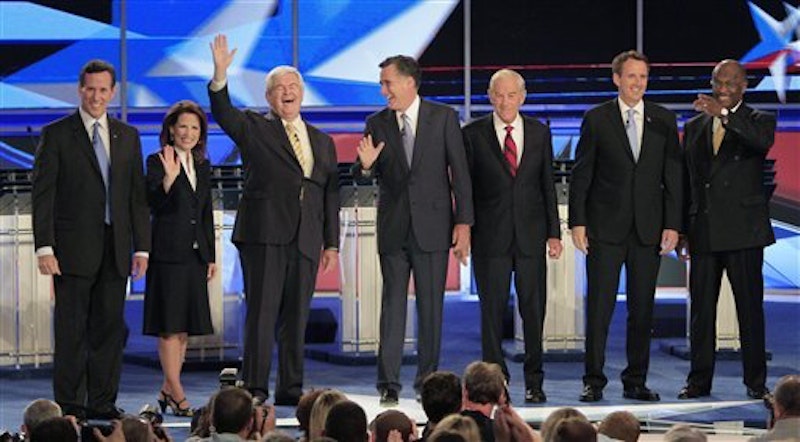 Like most American citizens, I don’t know much about the Republican candidates running for President.  So, what the hell, I watched the Monday night’s New Hampshire debate to see what I thought of the field.

Two hours later, I had discovered that the debate was two hours long.

What did I learn about the candidates?  Well, in no particular order:

Tim Pawlenty has the earnest, lean intelligence of Gilligan after being hit on the head by a coconut. The former Minnesota governor insisted repeatedly and forcefully that just because he had occasionally advocated mildly sane things in the past did not mean that he wasn’t as completely insane as anybody else on the stage, so help him God. Yes, he had supported the proposition that abortions should be allowed in cases where the mother had been raped by demonic ravening acid-blooded beasts from beyond the stars. But if you look at his record you’ll see that he actually passed legislation making Minnesota the state in which it was most difficult for women raped by demonic, ravening acid-blooded beasts to obtain an abortion. Which is why most industrial jobs in Minnesota are performed by salivating aliens—legal aliens, of course!—fed almost entirely on the blood of UAW workers.

Newt Gingrich carried himself remarkably well considering the fact that his entire campaign staff resigned last week and a retinue of circus clowns took turns slapping him in the face with three-day old haddock.  He said NASA should be defunded so that private enterprise could invent warp speed and we could ship gay people to Pluto where government could constitutionally prevent them from marrying. He also said something about saving billions in health care by not paying crooks, which sure sounded like bullshit, but I wasn’t really paying attention because everyone already knows already he’s going to lose.

Michele Bachmann has personally birthed a quarter of the population of the United States, and has provided foster care to the rest. As a personal favor to all her children, she announced her official candidacy at the debate, causing CNN moderator John King to almost have the decency to be embarrassed at what he’s doing with his life. Bachmann said the debate taught her about the goodness of the American people, who did not, it is true, rise up as one to beat her to death with her own smarm.

Mitt Romney was not able to attend, so he sent in his place a coiffed, starched penguin that screeched, “Obamacare! Obamacare! Obamacare!” every time the clowns assaulting Newt Gingrich threw it a haddock. When it was asked about sharia law being implemented in the United States, the penguin did a spit take, covering the other candidates in fish guts. This was probably the most statesmanlike moment of the debate, and almost made me proud to be an American.

Herman Cain did a live demonstration of his business acumen and ability to multi-task by making a pizza at the podium while simultaneously battling hordes of disloyal American Muslims. Later he consulted experts and, on their advice, called the moderator a meanie.

Rick Santorum admitted, when pressed, that he was more authentic than Mitt Romney, less irritating than Michele Bachmann, and more admired by his own campaign staff than Newt Gingrich. He also pledged to cut the capital gains tax to zero for all manufacturers and to recoup the revenue through exorbitant sin taxes on Google searches.

—You can also find Noah Berlatsky at hoodedutilitarian.com