Yelling at them isn't going to help Biden. 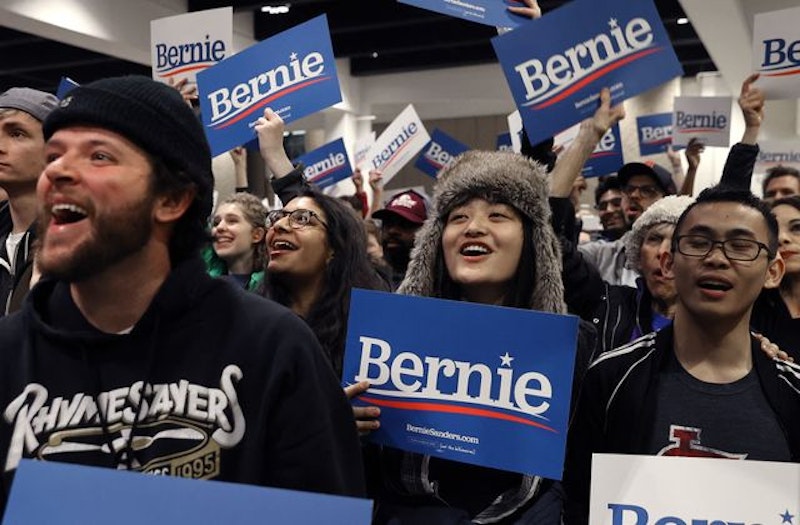 Bernie Sanders finally dropped out of the race for the Democratic presidential nomination last week. His supporters are understandably depressed and bitter. Some say they won't vote for Biden in the general election.

Sanders' detractors, and Biden supporters, are (again understandably) upset that anyone on the left would vote for Trump. But yelling at or scolding left #NeverBiden partisans is mostly counterproductive. You're unlikely to shame someone into voting for Biden. But you might be able to find common ground over time with a less confrontational approach.

The impetus for attacking Sanders' supporters is partially fear. The 2016 election was very close, and many Democrats worry that Sanders voters abstaining could throw the election to Trump again. But in 2016, Democrats supported Clinton by 94-5 percent, about the same as the percentage of Republican who supported Trump, 92-4 percent, according to Pew. Sanders’ coalition included a number of people who don't identify as Democrats and routinely vote third party. They were never going to vote for a Democrat other than Sanders (and some might not have voted for Sanders if he were the Democratic nominee.) There's not much point in berating people who weren't going to vote D anyway.

Beyond that, at least at the moment, Biden's poll numbers have him solidly up on Trump, between +5 and +11 or so. That's including Sanders voters who say they won't vote for Trump. The numbers could change, and Trump could win. But the never-Biden Sanders supporters appear to be a loud but very small minority based on current polling.

If someone says they can't vote for Biden, and you counter that they're callous entitled monsters who want people to die of the coronavirus, they're not going to suddenly decide they want to work with you. During the campaign, a lot of Democrats pointed out that Sanders supporters calling other candidates snakes and rats wasn't very productive. I agree. But that goes both ways.

I'm all for writing off most MAGA voters. If someone's main political commitments are harming immigrants and forcing pregnant people to give birth against their will, there's not a lot of common ground, and the best thing to do is to tell them to fuck off. But Sanders voters, in my experience, mostly want the same things as I do—healthcare for everyone, an end to torturing children and adults at the border, abortion rights, a social safety net, taxing billionaires. There are certainly policy differences between Biden and Warren (my candidate) and Sanders. But there's also a lot of overlap.

So why not emphasize the overlap? When never-Biden people say that a President Biden would be no different from Trump in Supreme Court appointments—that's irritating and confused, but I generally point out that he's already signaled strongly that he wants to appoint Ketanji Brown Jackson, a solidly left judge who used to be a public defender. If Biden detractors say they can't vote for Biden because he's been credibly accused of rape, I acknowledge that that's a reasonable position, and ask them to vote down ballot, where we need everyone to turn out to win the Senate and the House and local government offices.

Not coincidentally, this is the approach Biden and Sanders are taking themselves. Reporting indicates they've been talking together for some weeks about how to unify the party. Biden's picked up some of Sanders' ideas in a typically half-measure manner—but a public option for healthcare would help a lot of people even if it isn't m4a, and forgiving debt for some students is better than forgiving debt for none. Sanders has suspended active campaigning, even if he isn't taking his name off the ballot.

This doesn't mean you can't criticize people. There are some Bernie-or-bust pundits (Glenn Greenwald) who don't engage in good faith, and have effectively become Trump propagandists. But most never-Biden Sanders supporters are just disappointed, angry, and fearful about what will happen to them now that m4a is off the table.