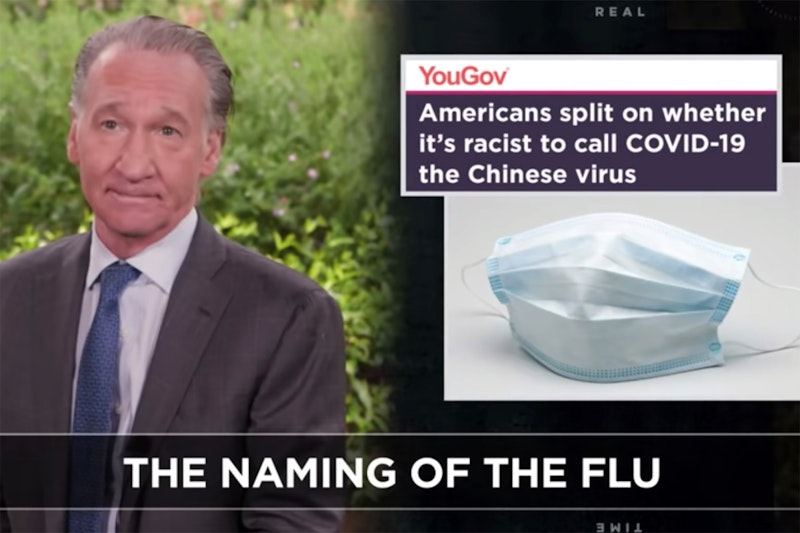 You know Bill Maher’s smart because he talks down to you. “Sorry, Americans,” he says. “We’re going to have to ask you to keep two ideas in your head at the same time: This has nothing to do with Asian Americans, and it has everything to do with China.” Mr. Maher, millions of Americans come from China; millions of others don’t but look like they did, at least to some non-Asian Westerners. If you talk about “the Chinese virus” or “the Wuhan virus,” you stand to make trouble for these people—angry bigots began cursing at, spitting on, and hitting various Americans of East Asian descent after COVID-19 became a crisis here. But Maher’s thinking about bigger things.

The comedian delivered his “Sorry, Americans” speech on his TV show, Real Time. The theme was that objecting to “Wuhan virus” (or “Chinese virus,” one assumes) is the same as objecting to criticism of China and its wet markets. The thought of such pious relativism made him bark. “This is about facts,” Maher said. “This is about life and death.” Impassioned, he cut deep with his analysis: “The PC police say it’s racist to attack any cultural practice that’s different than our own. I say liberalism lost its way when it started thinking like that.” At times he burst with outrage, as in “Jesus fucking Christ, can’t we even have a pandemic without getting offended?”

What he didn’t do was name or quote anybody who had claimed that we can’t judge China for letting the wet markets stay open. Like comics say, who are these people? No, really, I’d like to know. On social media I’ve encountered people who get mad about Trump and the Fox crowd saying “Chinese virus,” and I think they make a good case. But who says criticizing the wet markets is racist? Anthony Fauci doesn’t; neither does the person at the United Nations in charge of biodiversity. I know this because Maher cites them during his bit. People who get mad about “Chinese virus” don’t get mad about Fauci and the UN official saying what they do. So it looks like we can keep two ideas separate. (Via Google we can also find out the UN official’s name. She’s Elizabeth Maruma Mrema, acting executive secretary of the UN Convention on Biological Diversity.)

Maher talks like someone who thinks all too clearly and not at all well. Beliefs swell into his head and he figures he reasoned them there. “Zika is from the Zika Forest, Ebola from the Ebola River, hantavirus the Hantan River,” he says, educating us about how scientists name diseases. “There’s the West Nile virus and Guinea worm and Rocky Mountain spotted fever and, of course, the Spanish flu.” A forest, an island, rivers, a mountain—you notice these aren’t the names of countries? Except Spain, of course, and as most have now learned, the Spanish flu wasn’t from Spain. But Maher looks at the list and sees a reason to stick an entire people’s name on a deadly disease.

He’s like that. If somebody objects to criticizing niqabs, and somebody else objects to jokes about bat soup, and Ted Lieu objects to a Republican saying “Wuhan virus,” then Bill Maher’s sure that pious liberals want to shut down anyone who faces facts about live meat and China. Maher doesn’t realize this is the sort of thing that has to be shown, not assumed. Mr. Incisive Intellect talked for five and a half minutes and didn’t check if there was anything to talk about.