The 2012 Election Battle Lines Are Etched in Dollar Signs 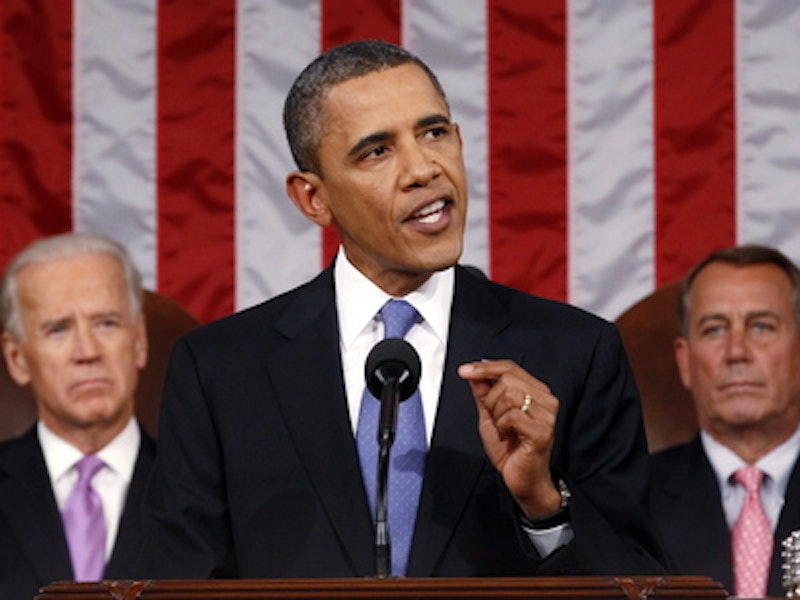 Debates are hard to win but easy to lose. And speeches are easy to deliver but often fail to convince. The confluence of the two back-to-back occasions, by design or default, has set the tone and the tactic for the presidential showdown for the year to come between Barack Obama and whoever Republicans decide can win back the White House, Mitt Romney or Rick Perry. The Republican debate, featuring eight candidates on-stage, along with help from recent polls, effectively winnowed the field to two. And President Obama, reaching for the stars while sinking in the polls, has positioned himself to run as either the president who turned around the economy or against an intransigent Congress, whichever way the gods would have it.

Begin with the Republican debate. Some really weird and strange stuff went on during that 1:45 minute exchange, enough the scare the stuffing out of the average political hobbyist watching the ego-jerking display. The tone of the encounter throughout the evening was decidedly anti-government, coming from the very candidates who think they can lead it. The loudest and longest applause erupted, for example, when an unapologetic Perry boasted of having executed 234 people during his 10 years as governor of Texas. This alone reveals where the heart and the mind of the Republican party are these days. The audience resonated, too, during the debate’s sharpest exchange between Romney and Perry over Social Security. Perry once again characterized the program as a “Ponzi scheme,” while Romney defended Social Security and finding ways to fix and preserve the system for future generations. Perry’s rant was, once again, the applause line, even though it’ll do him no good in the Florida primary election, which is senior citizen revenge. Michelle Bachmann again called for a balanced budget amendment and Ron Paul, the government minimalist whom everybody ignores, proposed abolishing all mandates. And add to the mix Perry’s anti-science ramble. Such is the stuff of Republican orthodoxy these days.

But the evening’s big winner was not even on stage. The event was held in the Ronald Reagan Library, in Simi City, outside Los Angeles (not to be confused with Simi Winery, which is in Sonoma County); there was a tribute to Reagan; his wife, Nancy was there; and it all took place beneath the wingspan of the Boeing 707 that ferried Reagan around the world as president. Reagan’s name was mentioned dozens of times by the candidates, which prompted NBC’s Brian Williams, the debate’s co-moderator, to remark: “The man seems to live on forever.” But those who invoked Reagan’s name as the modern conservatives’ spiritual godfather apparently knew little of Reagan’s record as a pragmatist: As governor of California and as president, Reagan raised taxes 11 times to deal with budget deficits; he lifted the debt limit many times; he signed a law granting amnesty to millions of illegal immigrants; he ran up the largest deficit in history up to that time; he presided over two recessions; and he signed a highly permissive abortion law. Yet despite all of the anti-government yapping and state’s rights rhetoric, the camera panned repeatedly on the giant letters across the Boeing 707’s fuselage – United States of America – a reminder that government is the glue that holds us together and the strongest line of defense against anarchy.

Obama is yet another story. Obama relies more on lofty speeches than on the dirty work of politics. And this was the speech of his political life, the one that can save or sink his presidency, depending on whether he can torque up the economy. Obama’s problem is that he rarely starts a fight that he doesn’t walk away from. The power of the presidency is awesome, and it’s a pity to watch all of that power going to waste. “The only abuse of power is having power and not using it,” John F. Kennedy observed. Republicans push Obama around because they know he won’t push back. Americans, according to just about every poll that’s conducted these days, are longing for a leader and a two-fisted fighter. To segue back to the GOP debate for a sentence or two, that seems to be the primal appeal of Perry. Say what you will about Perry’s often inane and rigidly fundamentalist views, the guy has swagger as well as a John Wayne celluloid sense of good-guy, bad-guy simplicity. (Perry graduated from Texas A&M, an agriculture school, with a 2.2 grade point average.)

What the Obama White House lacks are two things usually associated with successful politicians and presidents – cunning and cojones. The presidents Americans, especially historians, admire most are those who closely resemble monarchs or dictators, say Franklin Delano Roosevelt and Lyndon Baines Johnson. John F. Kennedy was long on panache but short on accomplishment because of his abbreviated life. President Theodore Roosevelt, no slacker himself, characterized the presidency as a “bully pulpit.” The trouble with the Obama Administration is that the guy in the pulpit is no bully. Imagine the ignominy of being pushed around by a yammering weasel like House Majority Leader Eric Cantor (R-VA). And therein lies the problem: Without brass knuckles, it’s difficult to do business with people who have a one-word vocabulary – NO.

In a deliberate counterpoint to the grandeur of the House chamber and the occasion of a joint session of Congress, Obama scaled back his customary soaring oratory, stripped his speech of  Washington jargon and spoke in the pointed, simple populist language of the people and asked Congress to “stop the political circus and do something to help the economy.”  His voice was stern and his appearance was solemn. Congress needed no reminder that its approval rating of 13 percent is way lower than Obama’s 44 percent. Lucky for Obama that his likeability rating in the polls is in the 70 percentile range, and ultimately it’s the likeability factor that decides elections. Obama is clearly attempting to shift the blame for the sinking economy to Congress, which he is reinforcing with a roadshow of speeches, the first in Cantor’s home district of Richmond, VA, and next in the important swing state of House Speaker John Boehner’s Ohio. He’s taking his case directly to the road - block House leadership.

Obama proposed an “American Jobs Act” of $447 billion in new spending and tax cuts, arguably not enough though more than expected, to goose the economy and bring down the stubborn 9.1 percent unemployment rate. The package was weighted toward tax cuts to appeal to the center of America politics, or independents, with which the Obama Administration is overly obsessed. He spoke again of reforming the tax code and a tax on the rich and also said he is willing to tweak the Medicare program. And he underlined the point that everything in his proposal is paid for, then applied pressure on the so-called super committee of Congress to come up with the money. Republicans sat mute and silent while Democrats clapped and cheered. And the irony of it all is that Congress controls America’s purse strings. Thus, Obama may win a couple of pieces of his program but it’s doubtful that he’ll win all of it.

Between the Republican debate and the Democratic economic proposal the battle lines of the 2012 presidential campaign have been carefully and deliberately etched in dollar signs and unemployment numbers. The apparent lesson from the Republican debate is that the best way to defeat Democrats is to act and sound like Ronald Reagan. And for Obama the instruction is that if you claim to be a Democrat act like one.