Throwing Down the Gauntlet

Obama's jobs speech was great rhetoric, but to accomplish anything he'll have to overcome vein-popping partisanship. 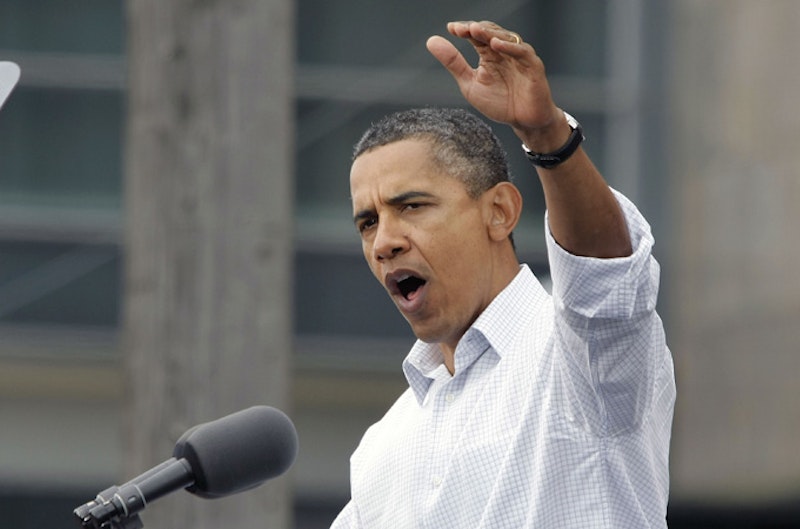 Last Thursday, after subjected to a ton of unnecessary political posturing, the public received some sort of gauntlet toss from President Obama in the form of a speech to a joint-session of Congress. The lack of jobs, the struggling economy—prior to its delivery, it was difficult to discern what the president hoped to accomplish. Flying in the face of reason, his rhetoric suggested he’d still angle for bipartisanship. Congressional Republicans, though, are more interested in denying the president political wins than they are in finding short- and long-term solutions to the tanking economy. And yet the president was able to combine an ostensible campaign speech with a legitimate, sober call for action: nearly half a trillion dollars in stimulus, consisting mostly of tax cuts and extensions of policies already in place—which include plenty of policies mainstream Republicans would happily pass if they weren’t being lead by the nose by the radicals and Know Nothings of their party.

The unparalleled size and shape of the global economy, the colossal artifice of our financial infrastructures, and an ever-present partisan slugfest all point to a moment of sober truth: what we’ve been doing hasn’t working; muddling through isn’t working; and what remains to be done is road-blocked by our natural democratic processes and vein-popping partisanship.

With each month of updated economic data, it grows more certain that the Obama administration’s 2009 stimulus package was sufficient in “only” heading off at the pass an economic trajectory much worse than what we’re experiencing now. Cold comfort for the millions of long-term unemployed. So for some, this hard data confirms that stimulus spending has failed. President George W. Bush’s unpaid tax cuts (responsible for an inordinate amount of our deficit issues), which have dropped top-bracket rates to the lowest point in decades, have been in effect for almost a decade. So, supply-side trickle-downer philosophy has failed.

The President has driven plenty of liberals more than a little crazy over his embrace of centrist positions on both the bargaining table and in the execution of policy. Call it the Third Way, triangulation, Clintonism—it doesn’t matter. The stakes are so high right now, both in terms of political brinksmanship and imperative economic issues that something akin to centrism should prevail. What else is there? No one is going to scream any louder than they already are; no one is going to “win” if our economy doesn’t improve. The president faces a decent prospect of reelection, but nothing is certain, moving forward. And if Mitt Romney or Rick Perry makes it to the White House, he will be replaced four years later via a still-screwed economy.

Inside baseball tells us that there are two “camps” in the White House: those who want to only pursue what’s workable in Congress, and those who want to take stands on principle and use Republican intransigence as a campaign foothold. Both avenues are viable, certainly, but not if they get lost in the partisan maelstrom and the heavy lidded economy. Neither approach will get very far if there’s no Bigger Picture on which to hold. Recently the Administration blew a solid chance to put a tally in both columns. Thursday’s speech was decently successful in representing both urges.

Recently, Obama delivered a clip in the knees to environmentalists by overruling the EPA’s updated smog standards, standards that will prevent tens of thousands of people from being a little healthier than they normally would. He okayed the Keystone Pipeline, which will bring a bunch of oil down from Canada. What boils my blood is this: why weren’t the two packaged together as something representative of how we need to go both ways. Building a pipeline creates jobs creates a wider tax base creates larger revenues creates monetary elbowroom for other things. That’s easy enough. The EPA is another matter.

As a matter of practical politics, to make progress on the environment you need healthy macroeconomic conditions. Which is part of my case for why everyone on the left needs to care more about monetary policy. Monetary policy is not that important for the long-term welfare of the country. But it’s extremely important for short-term fluctuations in the job market. And short-term fluctuations drive the political system. They drive election outcomes.

That first sentence could be amended to read: “As a matter of practical politics, to make progress on any issue your party cares about you need healthy macroeconomic conditions.” What’s the mobius strip of politics? You can’t win if you don’t govern, you can’t govern if you don’t win?

Republicans can be separated into two vague categories: on one hand you have the hard liners, the Tea Partiers, the Rick Perrys, Bill O’Reilly and the rest of FOX, the Podhoretzes and Cato Institutes; on the other you have the sort of Republican who is willing to let the first group dictate marching orders so long as taxes are low, private colleges are private, and the poor stay on the other side of the highway. It doesn’t matter that the demonization of homosexuals is a mainstream Republican opinion. It doesn’t matter that xenophobic, anti-immigrant rage is a mainstream Republican opinion.

Democrats are tired and anxious. There’s not much to rally around, too many subsections and amorphous blobs of progressive agitation. The profound and, hopefully, enduring victories of the past couple years are paling in comparison to what is almost surely becoming a lost decade—the jobless recovery, crushing debts and deficits, spiraling health care and education costs that have eliminated the inexcusably small increases in wages for the vast majority of the country. The Left doesn’t have a Tea Party to execute its cognitive dissonance. The President, for better and for worse, is the apex. And right now the Left is floundering for something beyond the day’s talking points, something beyond misdirection and centrism sans context.

Obama has used Great Speeches for Great Good before, and last week’s speech was great—but great in relation to the low expectations the public and the media and the government have for something getting done in this political climate. I doubt Congressional Republicans will be forced, compelled, or shamed into governing responsibly, but the president did throw down the gauntlet: he will take his message to every corner of the country. What he will then do, I hope, is set the terms for his presidency, his reelection, and the continuing evolution of the Left as the Ultimately Sensible Solution to the Nihilist Right.