Congressional redistricting has been nothing short of disastrous, as demonstrated by Maryland's plan for further liberalization. 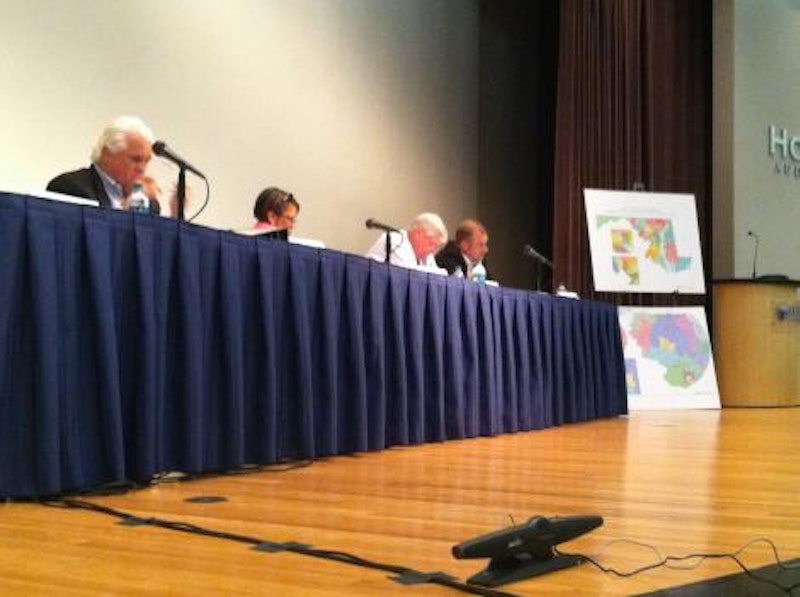 The people who draw maps of Maryland are not employed by Google Earth or Mapquest. Neither are they NASA satellite cartographers. Nor do they follow the zig-zag dictates of an anonymous voice on a GPS device. They are, for the most part, pretty much average Jacks and Jills, just like the rest of us, which is what they’re supposed to be because people in elective office are very much like the people who elect them. They are the 181 members of the General Assembly who are guided by partisanship and proprietary interests and who, with the quiet connivance of the courts, have gotten us into the mess we’re in with the reviled Congress.

And they’re getting ready to do it all over again, just as the cohort of 49 other state legislatures are, because Congressional redistricting is required by law every 10 years following the census and the population shifts in a highly mobile, almost borderless nation. So when the Maryland General Assembly convenes in special session during the week of Oct. 17, the designated victim with the bulls-eye on his back appears to be Rep. Roscoe G. Bartlett, the 10-term Republican from Western Maryland, as Democrats attempt to expand their House of Representatives’ membership from six to seven (out of eight.)

They’ve tried to decapitate Bartlett before, but this time Democrats are confident that the numbers favor their antic mission because of the blue-state population bulge in and around fast-growing Frederick County. It’s a toothsome twist, though, that Frederick (the city) has been a hotbed of conservative anti-immigrant activity, though backers of the Frederick-centric Congressional district cite the liberal State Sen. Ron Young’s (D) defeat of the hyper-conservative incumbent Alex Mooney (R), now chairman of the state’s Republican party in last year’s elections as evidence of the liberalization and political coloration change of the county.

The definitive map, etched in indelible ink, is said to be the handicraft of House Minority Whip Steny H. Hoyer (D-5th) and the other five Maryland House Democrats, all of whom are protected under the plan and all of whom have appended their sign-off signatures to the re-jiggered map. The meetings among the self-serving House members have taken place in Hoyer’s Capitol Hill office, and thus, it would seem, rendering redundant the work of the five-member redistricting committee—including Senate President Thomas V. Mike Miller (D-Calvert)—appointed by Gov. Martin O’Malley (D). Under the law, the governor submits the redistricting plan, and the legislature votes it up or down although it can present a plan of its own, which is unlikely. The courts have the final vote on the plan, if challenged, a source of many of today’s Congressional problems.

The most flagrant examples of maps gone amok are the 2003 redistricting plan rammed through the Texas legislature by former House Majority Leader Tom DeLay (R) that ultimately led to a Republican takeover of the Texas House delegation for the first time in 130 years, and the special noodle-strip Georgia district that was drawn to accommodate the now deposed Rep. Cynthia McKinney (D), an African American, under pressure by the Justice Department. Both cases were ultimately decided by the courts. The Texas appeal by a Latino group led to the carve-out of an all-Hispanic district, and the Georgia case created an all-black district. And along with them, out of design and complicity, came two corresponding all-white conservative districts.

The man being touted as most likely to carry the deep-blue battle banner into the newly created designer district built around Frederick County is State Sen. Robert Garigiola, the third-term Senate majority leader from what is known in Montgomery County as “up-county,” close to Frederick to be enough of a familiar name to the many MoCo residents who have fled to the cheaper housing and commuter-hell in the outer-ring exurbs. There may be others, of course, but Garigiola will probably have the imprimatur of House members and the cachet of Hoyer’s backing and fund-raising clout.

And in carving out the new district to oust Bartlett and pick up a seventh Democratic seat (and vote), Rep. Andy Harris (R-1st) apparently will get a free pass because adjusting the squiggles on the map to accommodate one district creates bulges in another and it’s virtually impossible to redraw two without threatening an incumbent  Democrat. Each of the eight Congressional districts should contain about 650,000 Maryland residents, give or take a few thousand, though a candidate need not reside in the district in which he or she runs.

Ten years ago, when the hapless Gov. Parris Glendenning (D) attempted to eject Bartlett from Congress, he and his Democratic helpmates configured the Sixth Congressional District into a ribbon about a mile wide and  200 miles long, stretching like an ill-defined elastic band across the top of the state from Garrett County to Harford County. Bartlett survived. Helen Delitch Bentely (R) did not, losing the Second District seat to Rep. C. A. Dutch Ruppersberger (D). And herein lies the problem with Congressional redistricting as it has evolved over the past half century since the one-man, one vote Supreme Court ruling in the early 1960s. About the only guideline that exists today, with the sanctimonious complicity of the courts, is gerrymandering. And that is precisely what has created the artificial partitioning of Congress into stone walls of uncompromising enmity.

Redistricting is a brutal process whereby the shift of a few precincts or the elimination of a several crucial blocks of real estate can make or break a political career. The original guidelines for redistricting included population balance, contiguity and commonality of interests. Yet what do, say, Rock Hall, on the Eastern Shore, and Cockeysville, in Baltimore County, have in common even though they’re both in the First District. And over the years, blacks had begun to complain about the lack of representation in Congress, so special districts were drawn to accommodate black candidates by packing blacks into their own carved out districts. In doing so, other districts were whitened, creating the artificial effect of liberal and conservative (Democratic and Republican) competing districts. In most cases, the courts upheld the sanctity of the black districts as untouchable and inviolate, establishing for years to come guaranteed separate black and white districts, de facto segregation all over again, only this time with black approval and white complicity.

And as control of state houses and legislatures often change parties, the makeup of Congressional districts changes to accommodate the shift in state political power. Thus, the parties in Washington are completely reliant on the parties back home for survival. Finally, the number of seats in the House is set by the Constitution at an unchangeable 435 (unless amended). So with population shifts come winners and losers in representation. States in the Northeast, for example, where population is shrinking, have been losing seats to states in the South and West that have been experiencing population growth because of accommodating climate and non-union job expansion. A seat in New York or Connecticut may be a Democratic, or liberal, seat, but if it’s lost to Utah or parts of Arizona or Wyoming, it’s likely to go Republican and conservative. So in effect, we, the people, have drawn and redrawn ourselves into the intractable mess that is today’s fogbound Congress and we have no one to blame but ourselves.

Redistricting is the last legalized act of bodysnatching and citizen displacement. As originally intended, Congressional redistricting was supposed to be the great leveler by distributing people equally and equitably into defined warrens across a state. Instead, it has created exactly the opposite, 435 monolithic and competing blocs of segregated look-alike voters whose representatives rarely see eye-to-eye let alone issue-to-issue. Redistricting, as it is applied, has been an experiment that is destructive to the very idea of democracy in action. For proof, take a look at Congress.