The GOP needs to change, or keep suffering embarrassing losses. 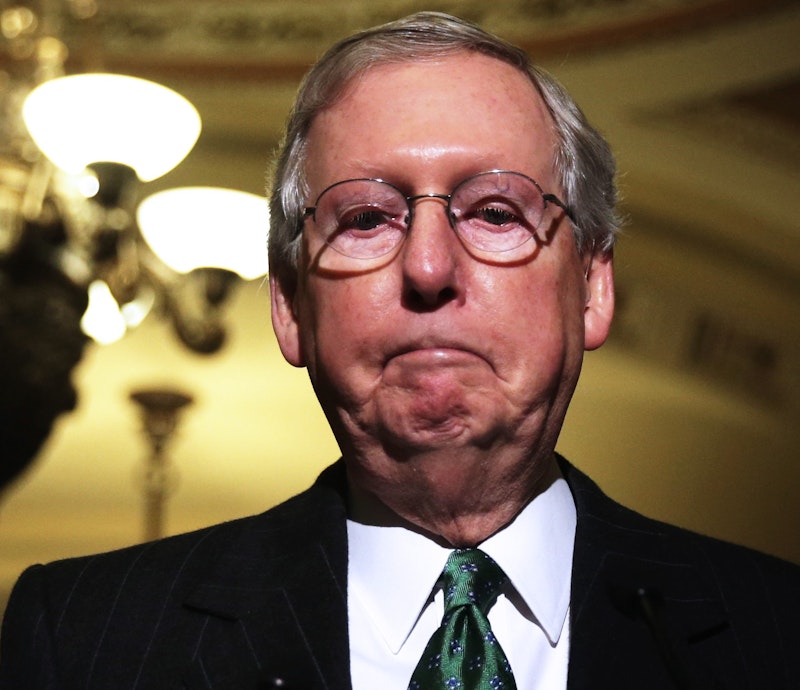 The final midterm results are settling in, and there's no question that Democrats achieved a sweeping victory. Despite a brutal map in the Senate, they lost only two seats; in the House, they look poised to flip their 40th seat in California. Democrats won shocking upsets in the governor's races in Kansas and Wisconsin; they swept former Republican bastion Orange County, which now has zero GOP representatives. Their margin of victory in the popular vote total for the House—8.8 million votes—is the largest in history, breaking the record for the Watergate midterms of 1974.

In response to this triumph, the punditocracy rose as one and declared that the Republicans were in disarray, and that they must abandon their radical policies if they ever want to win over moderate voters and be a competitive party again.

Kidding. No, of course that didn't happen. When Democrats narrowly lost the Electoral College despite a clear popular vote victory in 2016, Trump was treated as an unstoppable popular force, to whom all must defer or be destroyed. People on the left, right, and center, from Salena Zito to Dick Durbin to Bernie Sanders, insisted that politicians needed to cater more enthusiastically to Republican voters. Profiles of rural Trump partisans flooded the Internet. Democrats were the party of out-of-touch-elites, the think pieces chorused; Democrats couldn't win elections. Democrats needed to abandon their support for racial justice, reproductive rights, and LGBT rights —all that icky "identity politics"—if they were ever to be an electoral force again.

But now Republicans were crushed in elections for two years. They lost a senate seat in Alabama; they lost in the upper Midwest; they're bleeding support in suburbs. Trump has had the highest disapproval ratings in history for every day of his presidency but one, according to Nate Silver’s 538. So why aren't people lining up to tell the Republicans that, say, shooting tear gas at migrant children is a path to electoral disaster, or that they’ll be a permanent minority party if they don't stop making alleged rapists and sexual assaulters like Brett Kavanaugh and Donald Trump the face of the party?

I think there are two reasons. First, the mainstream media has mostly given up on scolding and warning Republicans because they know that Republicans by and large aren't reading. Conservative and centrist mainstream writers like Bret Stephens and Nicholas Kristof can tell Democrats to be more conservative, and they will, at least, annoy some number of Democratic readers.

But Republicans have largely abandoned the mainstream press for right-wing media like Fox. There isn't a niche for centrist and left pundits to troll the right, because the right doesn't listen to centrist and left pundits.  Even back in 2012, there were the remnants of the capacity for self-reflection in the GOP; after Mitt Romney lost, many urged the party to stop demonizing immigrants in order to improve its standing with Hispanics. But by 2016, no such dissent was allowed.

Perhaps even more important than the GOP media bubble, though, is racism. Republican voters are white, and, in a racist country like the United States, people on every part of the political spectrum see white voters as more important and more typical than everyone else. Democrats are constantly shamed for failing to appeal to more white voters. The fact that Republicans lose badly with black voters, Hispanic voters and Asian voters and everyone who’s not white isn't such a crisis, because, by the logic of racism, those voters aren't real Americans anyway.

The fact, though, is that Democratic voters are real Americans, and there are a lot more of them than Republican voters. Everything people have been saying about Democrats—that they are moving too far from the center, that they’re losing most of the country, that they’re in thrall to radicals who will destroy the party—is actually true of Republicans. The GOP has embraced nativist appeals which are broadly unpopular, and when defeated it simply goes back to trying to gin up funding for a wall, and broadcasting pictures of troops tear-gassing migrant children. All the Republicans have to offer is racism for the white elite. The midterms demonstrated that Trumpism as an ideology is unpopular and bankrupt. Republicans can change, or they can keep losing.