Assuming Trump won just because of racism is the wrong path to victory for the Democrats. 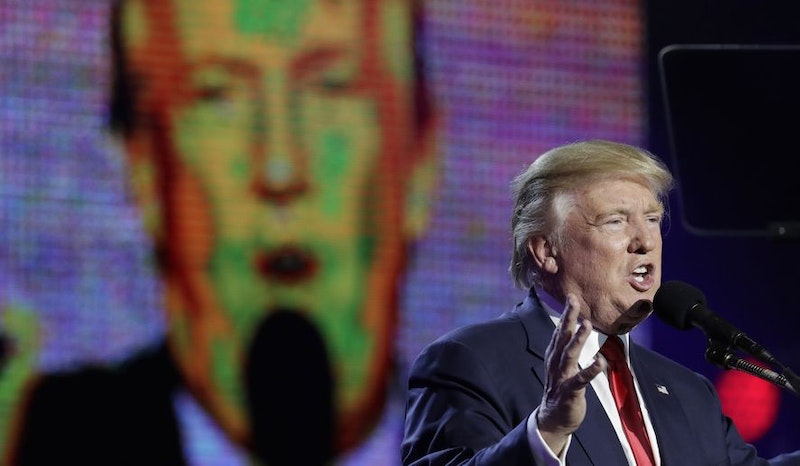 The Democratic Party finds itself divided into two main camps as it heads towards the 2020 elections—those who don’t think the Party’s inability to beat a candidate they thought of as a joke until he got elected means fundamental change is called for, and those who believe self-reflection is the proper response. A recent column at Splice Today by Noah Berlatsky, in which he declares that the Democrats’ midterm success means it’s only the Republicans who must change in order to have a future, is an emphatic reflection of the former point of view.

Trump used tortured logic in a vain attempt to spin the loss of what would turn out to be 40 GOP seats in the House of Representatives as a “win,” but jumping to conclusions based on those results is imprudent even though, as the Berlatsky notes, “Their margin of victory in the popular vote total for the House—8.8 million votes—is the largest in history.” Trump’s already proven he doesn’t need a popular vote victory to win a presidential election. Moreover, the Democrats lost 63 seats in the 2010 midterm elections—the largest House swing since 1948—and Obama still won a second term.

Berlatsky writes that, after Trump’s election, “people on the left, right, and center, from Salena Zito to Dick Durbin to Bernie Sanders, insisted that politicians needed to cater more enthusiastically to Republican voters.” Sanders released a statement on November 9 recognizing that Trump “tapped into the anger of a declining middle class” and that “people are tired of working longer hours for lower wages.” To the Left, “the declining middle class” is euphemism for “racist white men”—lower caste members of society who must be shunned. However, Sanders added, “To the degree that he pursues racist, sexist, xenophobic and anti-environment policies, we will vigorously oppose him.” Contrary to what Berlatsky’s suggesting, the Vermont Senator’s not looking to woo “Republican” voters in general—just the swing voters who the Democrats couldn’t reach in 2016.

Berlatsky imagines an aftermath to the 2016 election that never happened. Mostly it’s been Democrats stubbornly declining self-reflection, opting instead to focus on the Russia investigation—with no hard evidence it swung the election—and the alleged racism of all Trump voters, an assumption that’s unsupported by actual facts. The sense of denial’s so strong because the Democrats have created a moral abyss between the two major parties that’s so wide that attempting to straddle it is perceived as both a waste of time and “sinful” within the current “evangelical” mindset of the Left—the blasphemers must be cast out of the temple forever.

Progressive ideology now values hard principles only until they begin to intrude into “sacred” territories such as diversity for diversity's sake, social justice, and “equity.” Challenging any of those concepts in any way makes you a “racist.”

Continuing his flawed analysis, Berlatsky introduces the straw man contention that the post-2016 election consensus on the “left, right, and center” was that “Democrats needed to abandon their support for racial justice, reproductive rights, and LGBT rights—all that icky ‘identity politics’—if they were ever to be an electoral force again.” There was no such consensus. Only the most subjective observer of politics would use the word “abandon” here, as it’s unthinkable that the Party would ever discard the cornerstones of its current identity. The tenor of the chatter was more about de-emphasizing identity politics—a proven political loser for the Democratic Party—relying less on counterproductive allegations of rampant racism among Republicans, and toning down political correctness.

The U.S. is, according to Berlatsky, a “racist nation,” but racist nations don’t elect a black president twice, nor do they, as the U.S. does, allow more immigrants in than any other nation. The U.S. is, in fact, one of the world’s least racist nations. Are we to believe that the 13 percent of Obama voters who, according to the American National Election Study, switched to Trump in 2016—enough to sway the election—are all racists? Perhaps Trump’s win wasn’t simply a triumph of racism. This isn’t meant to suggest that racism doesn’t remain a major American societal problem, but there would be few social sanctions for racist behavior in a racist society. Try acting that way—or even to be perceived as acting like a racist—when someone’s has a camera pointed at you and you’ll have no job the next day. You’ll probably be kicked out of your apartment too.

As part of his indictment of American society in general, Berlatsky writes, “People on every part of the political spectrum see white voters as more important and more typical than everyone else.”

Since 76.6 percent of Americans are white, then yes, from a purely political point of view they’re the most “important” and “typical” demographic. This doesn’t mean that a party should try to appeal to them as Trump’s GOP does currently (Trump’s despicable comments on Charlottesville are now part of that Party’s legacy), but it suggests you shouldn’t be blatantly stereotyping a huge segment of them, a tactic that offers no political upside. You won’t hear Democrats talking in public about winning the “white vote,” because it’s considered unseemly. Hillary Clinton understands the concept, however, and she got in hot water for being frank about it during her 2008 primary election battle against Barack Obama, who she said wasn’t attracting white voters like she was. "These are the people you have to win if you're a Democrat in sufficient numbers to actually win the election," she said. "Everybody knows that."

Intersectionality proponent Berlatsky would be well-advised to study these words carefully, because Clinton has never said anything more accurate. Instead he chooses to Otherize a group he holds a strong bias against.

Concluding his misleading column, Berlatsky offers this gem: “All the Republicans have to offer is racism for the white elite.” If you think in such reductive terms and lack any nuanced understanding of the opposition, you can’t be taken seriously as a strategist. Your role is more like whipping up the base, similar to what Trump does at his rallies, where facts don’t mean a thing. The 2016 presidential election was decided by a small number of votes in just a few key states. The Democrats don’t need to “abandon” any of their core beliefs to win back a handful of voters and defeat Trump in 2020. They just need to stop thinking like Noah Berlatsky.