Reacharound Across the Aisle

Times columnists shocked by absence of ideology in Trump supporters are light years behind the times. 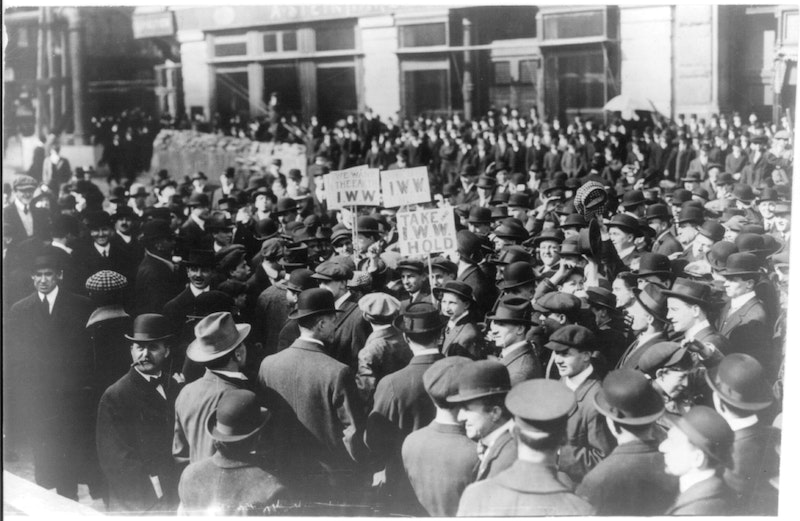 Side by side, David Brooks and Michelle Goldberg had op-eds in The New York Times earlier this week that further betray how out of touch they are in 21st-century America. They’re obsessed with obsolete concepts: compromise, shame and decency. Brooks wrote about the generation gap (again), in a piece headlined “Liberal Parents, Radical Children.” Two paragraphs before slipping on a banana peel and invoking that odious anti-Semitic cipher “cultural Marxism,” Brooks correctly but unintentionally diagnoses the root of society’s rot: “The militants are more likely to believe that the system itself is rotten and needs to be torn down. We live in a rape culture, with systemic racism and systems of oppression inextricably tied to our institutions. We live in a capitalist society, a neoliberal system of exploitation. A person’s ideology is determined by his or her status in the power structure.”

I’m still not convinced Brooks’ tenure at the Times isn’t a prolonged Andy Kaufman-esque performance piece lampooning feckless centrism and casual pick-your-ism. His weekly appearances on PBS with syndicated columnist Mark Shields show a different man, still meek and mealy-mouthed but never as regressive or brain damaged as his writing for the Times. It’s almost as if… he’s never… written one of these… himself. Though it’s probably one of his interns, Brooks’ columns are reliable “hate-reads” for just about everyone because they’re baffling and often verging on nonsensical, as if they were generated by a computer running on Windows 95. Brooks and his intern/lover/computer can’t comprehend a world better than the one we already have, toxic institutions and all, simply because, well, that’s the way it’s always been. They’re “universal.”

Michelle Goldberg, on the other hand, shows how hopelessly naive and needlessly forgiving so many of our mannered liberals are. She suggests of Trump supporters: “Maybe They’re Just Bad People.” Yeah, no shit. The Times bending over backwards to excuse and explain away white racism in the Rust Belt is well-documented, and after reading Goldberg’s essay, I expect they’ll continue apologia no one asked for even after Trump is reelected in 2020. Goldberg cites conservative “groupie” Lisa Baron’s 2011 memoir Life of the Party: A Political Press Tart Bares All as evidence that some people are just empty-headed and coal-hearted narcissists beyond redemption. In other words, most Americans.

She writes: “It’s not exactly a secret that politics is full of amoral careerists lusting—literally or figuratively—for access to power. Still, if you’re interested in politics because of values and ideas, it can be easier to understand people who have foul ideologies than those who don’t have ideologies at all.”

Seriously? What ideology is easier to understand than the self? Goldberg also cites a Times story about a prominent, wealthy gay couple in New York who became Trump supporters on election night after Clinton lost: “I didn’t want to be part of that misery pie.” Who does? I might not have the same avarice or invest any energy into superficial slights (Chelsea Clinton ditched them at a chi-chi Manhattan restaurant, so they called Don Jr. and he came right away), but the lack of ideology that Goldberg can’t fathom is really easy to understand. It requires no work, no investment (material or emotional), and no approval from anyone but yourself. It’s masturbation and junk food as ideology. How is this not fundamentally American?

Goldberg continues: “In many ways, the insincere Trumpists are the most frustrating. Because they don’t really believe in Trump’s belligerent nationalism and racist conspiracy theories, we keep expecting them to feel shame or remorse.”

Why do you continue to expect this from people who’ve repeatedly demonstrated over the last three and a half years that pissing people off is its own reward? As Tom Sizemore said in Heat, “the action is the juice.” Scanning hysterical tweets, watching red-faced talking heads on MSNBC, and skimming floundering columns like this one—this is the raison d’être. She goes on: “They are transactional in a way that makes no psychological sense to those of us who see politics as a moral drama; they might as well all be wearing jackets saying, ‘I really don’t care, do u?’”

Apparently it took Baron’s book for Goldberg to “grasp what public life is about for such people. ‘I loved being in the middle of something big, and the biggest thing in my life was Ralph,’ she wrote in one of her more plaintive passages. ‘Without him, I was nobody.’ Such a longing for validation is underrated as a political motivator. Senator Lindsey Graham, another insincere Trumpist, once justified his sycophantic relationship with the president by saying, ‘If you knew anything about me, I want to be relevant.’ Some people would rather be on the wrong side than on the outside.”

Most people would rather be on the wrong side than on the outside. The “radicalized” leftist Millennials that scare David Brooks at least recognize corruption and vacuity when they see it. The incredulity at the vanity, narcissism, and banality of evil of most Americans is what will get Trump reelected, and maybe another losing Hillary Clinton campaign. Trump isn’t afraid of these people, he and the Republicans are probably more concerned with Alexandria Ocasio-Cortez and her cohort because they too speak in no uncertain terms and know how to use aggression and blunt force to accomplish political goals. Compromise is a relic of the 20th-century—we live in a winner-take-all society, and trying to “reach across the aisle” or understand “the other side” is a pointless exercise.