Immigration is the Primal Scream of America’s Character

Americans have become too lazy to perform their own lowly chores. 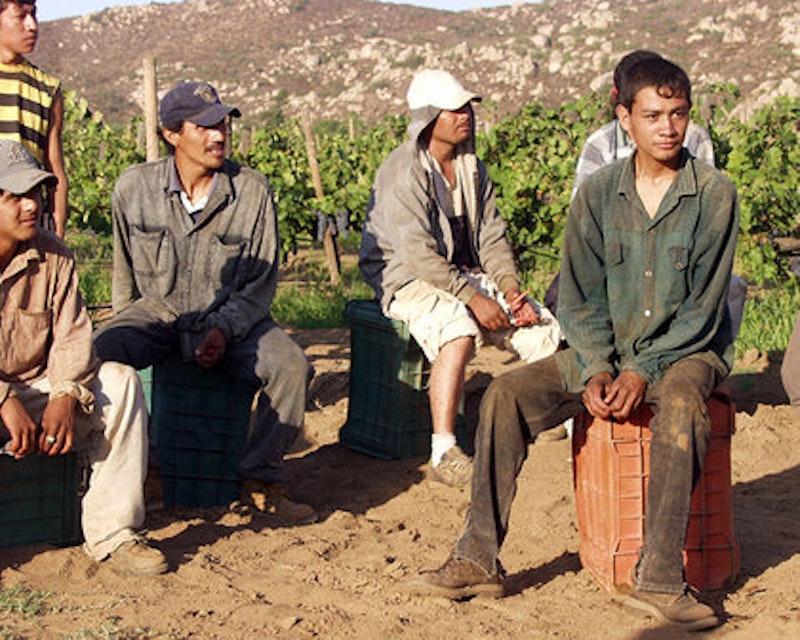 Every spring, for the past several years, Maryland Sen. Barbara Mikulski (D) has had to plead with federal officials to increase the quota of guest workers from Mexico so they can pick crabmeat to feed the state’s bottomless appetite for the Chesapeake Bay region’s famed delicacy. Without the migrant help, supermarket refrigerated cases would go empty and an entire Eastern Shore industry would shut down for lack of workers.

True, they are guest workers, invited by the government as seasonal employees to perform the many menial jobs that Americans find distasteful and demeaning. And it’s true again that they are a class apart from the estimated 11.1 million immigrants who are here illegally and living in the shadows of the law.

They represent, nonetheless, a cross-section of people who are willing to leave families behind for America’s promise of earning a living no matter how low on society’s rung—picking crabs, mowing lawns, spreading mulch, shouldering drywall at construction sites and harvesting lettuce in the sprawling fields of California. Americans have become too lazy to perform their own lowly chores.

The mosaic that is America was born of blood and sweat. Every new wave of immigrants does society’s dirty work. It’s always been that way, from the Irish who were driven to America by the great potato famine and were followed by impoverished Italians whom the Irish resented and fought because the new immigrants were willing to work for lower wages and thus take jobs from the Irish.

The immigrant experience is the primal scream of America’s character. The will to survive and the drive to succeed are America’s economic catalysts. The newly arrived are often welcomed to a lowly niche, either through an established friend or relative—Russians drive cabs, Vietnamese begin in manicure parlors, Koreans assemble dry cleaning monopolies, Italians and Greeks labor in restaurant kitchens—as each generation arrives and advances and high school and college degrees pile up. The blueberries you had for breakfast were probably picked by an undocumented worker.

Today, the Diaspora is even more intense and widespread because of the displacement by war and the end of colonialism. The war in Vietnam brought thousands to America, 50,000 alone to Silver Spring in Maryland. And the war in Iraq re-populated almost an entire town in Michigan with refugees who were driven from their homeland by American bombs. A friend used to remark that every time a foreign government collapses 10 new restaurants open in Bethesda.

The 18th century British philosopher and economist, Thomas Malthus, is remembered mainly for his observation that overpopulation would eventually force people to live at mere subsistence levels. What is forgotten, however, is another of Malthus’ observations, that eventually the people who do society’s dirty work will make the money. Enter Hispanics, and a long waiting-list of others.

You’d think immigration is an issue everyone could agree on. Unions want new members. Business wants cheap labor. Churches want converts. And, above all, both Democrats and Republicans are eager for new voters. Last week, an estimated 100,000 immigrants rallied in the nation’s capital for a change in America’s immigration laws. Called the Rally for Citizenship, they were joined by sympathetic demonstrators in 18 other major cities who are demanding the government’s stamp of approval and legitimacy so they can come in from the dark and participate fully in American life.

It’s an oft-told story. Many of the immigrants who are in America illegally were either born here or brought here, unwittingly, as children. They have no knowledge of anywhere else. They were raised here, educated here, work here and, for the most part, pay taxes here. They are, in all but name and birthright, American.

The last president to successfully deal with the issue of illegal immigrants was Ronald Reagan who, in 1986, granted amnesty to those living in America at the time. President George W. Bush tried three times, unsuccessfully, to pass variations of immigration reform laws. President Barack Obama has discussed pathways to legal status for five years. Finally, a bill is about to emerge from what is known as the Senate’s bipartisan “gang of eight” that will replace an Obama bill, or require the need for one, if the Senate’s bill falls short.

Today, immigration and citizenship involve more than fruit pickers and house cleaners. Modern immigration addresses the new class of the best and the brightest—scientists, mathematicians and computer specialists, those coveted by the economy’s science and technology sectors—many of whom were educated in the United States but forced to return to their native countries because of rigid immigration laws and expired student visas.

The working Senate bill, in its roughest outlines, would provide permanent residency and a pathway to citizenship for those immigrants who would learn English, pay a fine and back taxes and pass a background check. It would also include a cut-off date for a free pass. The hang-up over the legislation, as in the past, is over heightened border security and increased surveillance as well as wage scales for imported workers. Another roadblock is whether immigration reform should eventually lead to citizenship, a requirement Obama insists must be met.

Public opinion polls support immediate immigration reform that includes eventual citizenship, a case, once again, where Congress either lags behind public sentiment or is indifferent to how the public feels. Another example of rapid demographic and generational change, a dozen years ago citizenship for undocumented workers was an unthinkable threat to the nation’s established social order.

According to the Census Bureau, there are 52 million Hispanics living in America, or 16.7 percent of the total population, excluding those in Puerto Rico and other American-controlled island outposts. The number is projected to grow to about 150 million by 2050, or just short of half the nation’s current population of 330 million. Maryland has the 18th largest Hispanic population, at 474,000, or 8.4 percent, of any state in the nation. So dramatic is the growth of other cultures in America that within a dozen years whites will become the numerical minority.

Obama won 71 percent of the Hispanic vote in 2012 and about the same percentage in 2008. To underline the growing importance of Hispanics in the electoral process, a recent Republican National Committee post-election “autopsy” report concluded that the GOP must begin a serious outreach program to the Latino community if it is to regain stature as a competitive national party.

Immigration. Diversity. Together they’re the American story and the story of America. And they’re inseparable. There are 11.1 million people here who are living a netherworld existence and there is little the nation can do other than to accept them and absorb them into the mainstream of American life with all of its rights and tax-paying privileges.