Why I no longer stand by the Patient Protection and Affordable Care Act. 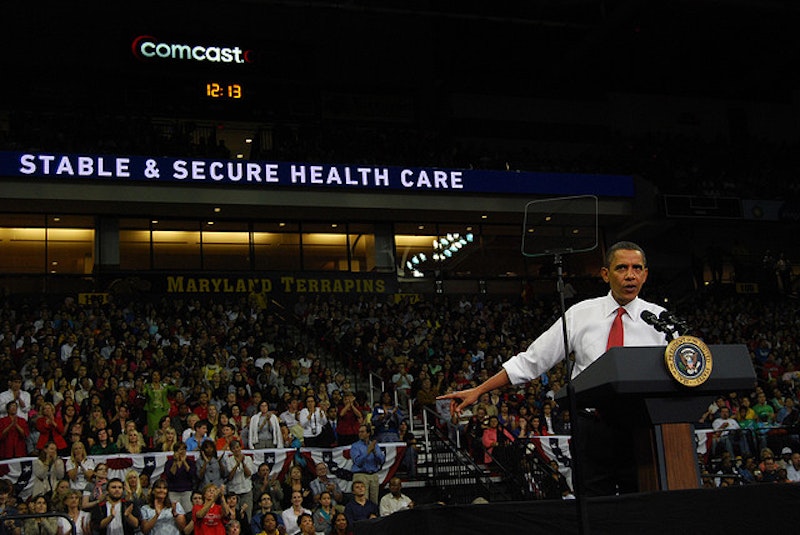 Wendell Potter, former PR executive for CIGNA turned whistleblower and author of Deadly Spin, writes, “Medical debt was a key reason for 62 percent of personal bankruptcy filings in 2007. In 2008, there were 1.07 million household bankruptcies […] Lack of coverage will contribute to the deaths of 45,000 people this year, or 123 people every day” (144). And it is precisely because of this tragic state of affairs that “in 2009, the five largest for-profit insurance companies […] set records for combined profits.  WellPoint, UnitedHealth Group, Aetna, CIGNA and Humana reported total profits of $12.2 billion in 2009, up 56 percent from the previous year. It was the best year ever for big insurance” (144). As a previously ardent supporter of Obama’s healthcare reform, quotes like these have compelled me to dramatically alter my opinion. The truth is that nothing short of a publicly owned universal system will solve the crisis.

One of the great ironies of the healthcare debate is that enemies of real reform call a public option/single payer system “socialist” and a “government takeover.” As Potter explains, in 1883, Otto von Bismarck, the “Iron Chancellor” and founder of the German Empire, created “the world’s first ‘compulsory sickness insurance’” in an effort to keep the Communists at bay. Extreme conservative anti-socialist that he was, von Bismarck’s universal healthcare system was a ploy designed to cater “to the working classes as leverage against their joining true socialist and labor movements of the day” (83). Other conservative European governments adopted this strategy of “turning benevolence into power” as a measure that “kept Communism from becoming a dominant force,” according to Potter. It’s comparable to how some regimes in the Middle East, such as Saudi Arabia, have recently extended largesse to the population in an effort to discourage revolution.

Nevertheless, many Americans believe that universal healthcare is a socialist program that will lead to a “government takeover,” mainly because of corporate propaganda.  Polls show that most Americans consider our system good to excellent, and many think we have “the best healthcare system in the word.”

Deadly Spin offers many illustrations of how fictitious this view is, aside from the well-known fact that we are the only industrialized country that does not have universal healthcare.  First is the ever-increasing rate of consolidation.  “In February 2010,” Potter writes, “The AMA [American Medical Association] issued its annual report on the state of competition in the health insurance industry […] In twenty-four of forty-three states covered […] the two largest insurers had a combined market share of 70 percent or more. That was up from eighteen of forty-two states the year before. Among the 313 metropolitan markets, an astonishing 99 percent were “highly concentrated” under Department of Justice guidelines, up from 94 percent the year before. In 54 percent of metropolitan markets, at least one insurer had a market share of 50 percent or greater, up from 40 percent of metropolitan markets in 2009 (137)

More specifically, WellPoint “has the biggest enrollment of any private insurer,” (135) including “about one third of nearly one hundred million Blue [Cross] subscribers” (135). This means that “more than one out of three Americans is now enrolled in a plan administered by one of the seven largest insurance companies—all of them listed on the New York Stock Exchange and owned primarily by big institutional investors” (146) who are solely concerned with maintaining favorable stock values and regard reimbursing patients as “a loss.”

Now, many propaganda campaigns claim that premium hikes are actually caused by rising health care costs. Furthermore, PR executives complain that hospitals charge private insurers more to compensate for lower Medicare rates. Potter explains that this is all nonsense. In response to the latter point, “collectively, the largest insurers have as much purchasing clout as Medicare. WellPoint alone—with 33.6 million members as of December 31, 2009—has nearly as much purchasing power as Medicare” (145).  As for rising health care costs, “If the industry had chosen to raise premiums at the exact pace that it increased spending on health care from 2000 to 2008, insurers would still have made substantial profits without pushing millions of people to go without health benefits.  But during those years, insurers raised family premiums 2.5 times faster than the rate of medical inflation, 3.3 times faster than that of wages, and 4.6 times faster than that of general inflation” (143).

So, where does all this leave us in the context of Obama’s reform?  The first thing to be said is that Obama’s capitulation on the public option illustrates the dysfunctional nature of our democracy, as polls showed Americans favored that program, while insurance corporations strongly opposed. Next, those who combat the Affordable Care Act on the grounds that it will grant Congress unlimited power and result in a government takeover is laughable because, aside from the transparently false nature of this argument, there already has been a corporate takeover that has been abetted by a compliant government and is still growing.

Tragically, reform is more illusory than real, though it is perhaps not entirely worthless. One can argue that it is not worthless because it will make an evil system a bit less inhumane by outlawing the disgusting practice of refusing insurance to people with pre-existing conditions, expanding Medicaid and providing incentives for doctors and patients to cut costs. In addition, reform marks a small victory over the insurance industry because, unlike Bill Clinton’s failed effort, Obama at least got something passed.

But ultimately, as is the case with his entire presidency, Obama is merely patching up a failed and dying system with legislation largely crafted by corporate interests. “Despite the recent reform,” Potter explains, “most analysts expect consolidation to continue as the big insurers buy smaller competitors or push them out of business.  Consolidation is inevitable because the government’s failure to control it has resulted in a cartel of huge insurers so influential that smaller companies will eventually have to sell out or shut down” (146).

Considering all this, it is impossible for me to continue defending health care reform as a solution to America’s health care crisis. It seems there are only two realistic ways to perceive Obama’s initiative: it may turn out to be the first step on the road to universal public healthcare, as Potter and the authors of Winner-Take-All Politics suggest. More likely however, reform will serve as the ultimate tool for corporate abuse to thrive with even greater impunity than before because now, every time premiums rise, as they surely will, the public will perceive it as an outcome of “Obamacare,” rather than as an ineluctable product of the for-profit health care system. This false outlook will be reinforced by endless sophisticated propaganda campaigns, probably crushing any future efforts at real reform, leaving most of the population at the mercy of Wall Street.