Eric Alterman's Nation op-ed is only the most recent example. 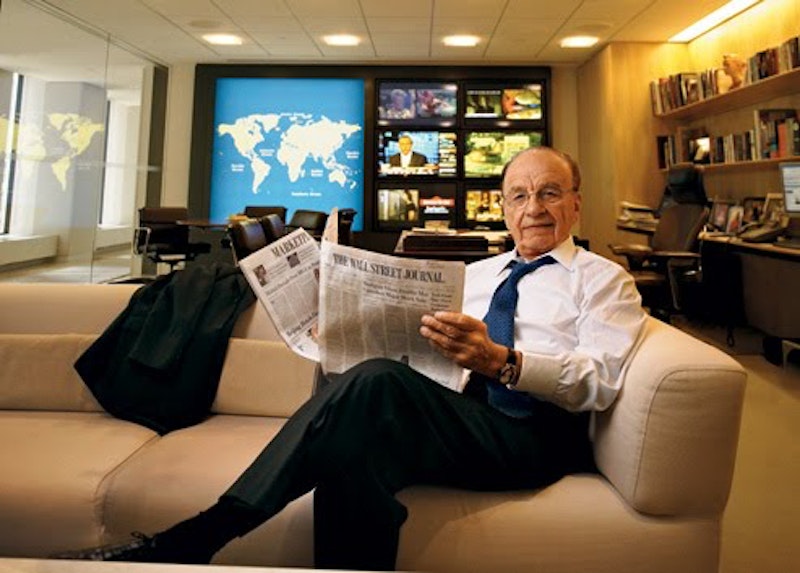 Paraphrasing Nation columnist Eric Alterman, via his vile character assassination of Rupert Murdoch on the occasion of the latter’s 80th birthday, the left-wing punditocracy’s galling tic of speaking for “the folks,” tells you all need to know about the insanity that grips America’s elite media clique. These are men and women who, in general, are affluent and in some cases very wealthy, key-punching their armchair battle cries egging on the proles to revolt against corporations, Republicans and Fox News. Alterman may not have the bank account of, say, The New York Times’ Paul Krugman or Thomas Friedman, but as an author, professor and columnist it’s safe to say he’s not a dumpster-diver or eating processed cheese and olive loaf for dinner each night.

Yet, in a classic demonstration of noxious noblesse oblige—which, regrettably, never goes out of style—Alterman has this to say about Murdoch: “[He’s] a man who, perhaps more than any other alive, has corrupted American politics by promoting ignorance, intolerance and the continuing class war of the wealthy against the rest of us.” Those last four words, “the rest of us,” are a go-to phrase for liberal/”progressive” columnists (even Krugman, who owns three homes) and, as it’s the rare commentator of this angry stripe who has a funny bone, I doubt any of them even recognize the irony of what they’re writing. I understand that pointing out such hypocrisy is not a ground-breaking observation, but if “class war” is going to remain in the limited arsenal of such scolds as Alterman, it’s a legitimate case of repetition.

There was much to digest in the professor’s jeremiad against the new octogenarian Murdoch, but perhaps the most unintentionally hilarious charge is that the Australian-born media baron is guilty of nepotism in the organization of his business. It’s true, of course: Murdoch’s son James is widely seen as his father’s successor at News Corp., with his siblings also playing key roles in the company. I happen to believe that James Murdoch doesn’t possess his father’s extraordinary drive, and that when Rupert retires or meets his maker, his labyrinthine media empire will slowly disintegrate.

That aside, you’d think that Alterman, when calling Murdoch a knowing purveyor of corruption and ignorance, a villain who “deserves to be shunned, a la Bernie Madoff,” would have the decency (never mind accuracy) to at least parenthetically point out that nepotism is a natural human impulse that isn’t confined to political viewpoints. He could’ve instructed his readers that The New York Times has been run by the same family since 1896 and that current publisher Arthur Sulzberger Jr. is a direct descendant of Adolph Ochs, who purchased the Times in that last decade of the 19th century. (In fairness, Alterman also considers the Times too conservative.) Or that The Washington Post’s ownership is similarly kept in the family. And if you’re talking nepotism in the context of politics, there’s no better example, obviously, than the Democratic Kennedy family. But, like Fox News’ odious Glenn Beck, Alterman picks and chooses his facts. It’s convenient.

Murdoch, says Alterman, is guilty of “lies, hatred and criminal activity in the service of his ideological, financial and personal interests.” If Murdoch is in fact a criminal, why hasn’t he been indicted in the United States, England or Australia? Perhaps he keeps judges and prosecutors and Times investigative reporters on retainer. As for Murdoch’s properties that Alterman slams, I don’t care for Fox News either, finding mouthpieces like Beck, Bill O’Reilly and Sean Hannity every bit as unctuous as Keith Olbermann, Chris Matthews or Lawrence O’Donnell. So I don’t watch cable news; maybe Alterman and Thomas Frank (who writes a monthly column for Harper’s, which is usually about Beck) shouldn’t either.

Let’s indulge Alterman on the absurd hyperbole that Murdoch is the one person most responsible for the corruption in politics, even if it’s escaped him that politics has been intertwined with corruption since the birth of this country, and focus on what News Corp. has accomplished under the “criminal’s” leadership. Number one: jobs. No matter what opinion you have of Fox News, it’s a ratings leader, and employs a lot of “folks.” Similarly, Murdoch has willingly lost millions of dollars each year financing The New York Post, which would go bust without that support. Alterman doesn’t mention The Wall Street Journal—Murdoch purchased it in 2007—which, along with the Times, exerts more influence than any other daily newspaper. More significantly, considering that Alterman is equating Murdoch with Bernie Madoff, is that had News Corp. not taken over the Journal, it’s likely the paper would’ve reduced staff significantly because of declining revenues. Instead, Murdoch has hired more employees, expanded the paper’s Saturday edition and maintained a vibrant digital presence.

I don’t think Bernie Madoff, waiting to die in the hoosegow, is contributing to the economy on the same scale as Murdoch, save for the corporate lawyers who are increasing their own wealth by business generated from the scandal.