The fate of the Republican Party—at least in terms of the next presidential election—rests in the hands of the hopelessly banal and the egregiously partisan. 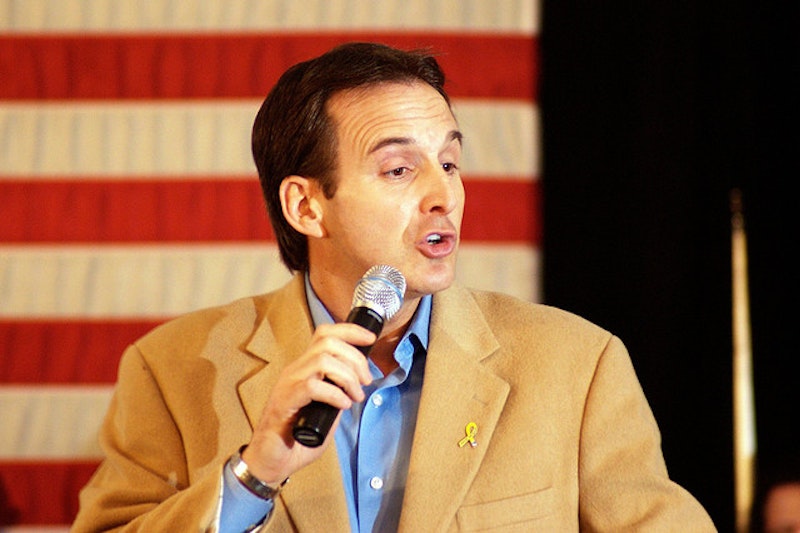 At long last, the Republican presidential primary is underway: and it just got a little louder. The wonderfully wack-a-do and gaffe-prone Rep. Michele Bachmann (R-MN), the diva of the right flank and a Tea Party darling, is forming an exploratory committee. She joins another exploratory committee category candidate from Minnesota, Gov. Tim Pawlenty, to test-drive their candidacies, slogans, strategies and fund-raising prowess.

Exploratory committees are more of a trigger mechanism than a declaration of candidacy. They qualify candidates to participate in debates and to begin raising funds without running afoul of the Federal Election Commission. Other Republicans who have taken the same tentative step to the edge of actual candidacy are former Louisiana Gov. Buddy Roemer and businessman Herman Cain, a black Tea Partier and hell-raiser. Former House Speaker Newt Gingrich has indicated he will formalize an exploratory committee later in the spring—maybe.

The GOP’s big-foot candidates are still laying back, though, making the appropriate gestures and proper noises but nonetheless stopping short of any kind of declaration as if they’re kidding anyone but themselves. The rest of the pack includes: former Massachusetts Gov. Mitt Romney; Mississippi Gov. Haley Barbour; former Arkansas Gov. Mike Huckabee; Indiana Gov. Mitch Daniels; and the cheerfully oblivious Sarah Palin, the 2008 vice presidential nominee and another Tea Party favorite who is now wealthy and independent enough to strut to her own percussive beat.

In the pathology of politics, the Republican Party is beginning to resemble a Democratic multi-candidate brawl that is symptomatic of two things: (1) Out-party individual ambition; and (2) An internal struggle over direction and control of the GOP. All of the potential candidates on the long list are conservative to one degree or another, oscillating from right to extreme right. But, as with the newly installed Congress, the question is whether the GOP controls the Tea Party or if the opposite is true. In the House of Representatives, for example, the members of Congress embossed with the Tea Party seal of approval are very much dictating the rules of engagement to Speaker John Boehner (R-OH).

Keep in mind that the first test-run is barely eight months away. The Iowa caucuses are scheduled for January 3, 2012, and the New Hampshire primary takes place on January 8. Both are viewed as part of a winnowing process. They are followed by a crunch of other caucuses and primaries until Super Tuesday—February 5—when 19 states either caucus or vote in a clump in what could effectively end the primary process for the season. The states conduct primary elections and the political parties sponsor caucuses. And bear in mind, too, that these are indirect and not direct elections wherein the voters choose delegates to the national conventions who will nominate party candidates. Delegates, not voters, control political conventions.

This is the intersection where picking a nominee from a broad field gets tricky for Republicans. Primary elections are based on organization—identifying and organizing the vote and getting it out on Election Day or packing the party caucuses with supporters. Caucuses amount to little more than buying the vote where they occur—with meals, entertainment, celebrity appearances and other forms of legal bribes. In Iowa, for example, the caucuses are all-day affairs that often go into the night and frequently resemble the jollity of county fairs.

Assessing the spreadsheet of prospective Republican candidates leaves no doubt that Haley Barbour has the best political toolkit of the crop—governor of Mississippi, former lobbyist, former chairman of the Republican National Committee and current chairman of the Republican Governors’ Association. Barbour has a national Rolodex and the best organizing and fundraising skills of the bunch. But don’t shortchange Newt Gingrich went it comes to counting votes. It’s his mouth and his marital history that cause him trouble with the Republican base. By contrast, the GOP base loves Mike Huckabee, a former preacher, for his down-home homilies and his guitar strumming; in some polls the head of the pack.

Mitt Romney is considered the tentative front-runner based on his previous outing, but he has a Mormon problem as well as the Massachusetts health care system that he sponsored as governor that is following him around like tin cans tied to a dog’s tail. It looks and sounds too much like ObamaCare. Call it RomneyCare.

On the other side of the Republican divide are the true believers and ideologues—to wit, Michele Bachmann and Sarah Palin, who would appear to cancel each other out in a Tea Party match-up. Both come from pretty much the same wing-nut margin of the Republican Party and have similarly intense support within the Tea Party movement. Palin’s popularity has been slipping in the polls, though, and a large wedge of voters believe she is ill-equipped to be president. She endorsed a broad list of candidates in the 2010 mid-term elections and lost as many as she won. But Republicans have a history of selecting nominees in their turn (former Senate Majority Leader Robert Dole and Sen. John McCain, to name two.) Palin was the vice presidential nominee in 2008 who brought energy and attention to McCain’s presidential campaign. She might do the same for the conservative cause and the fractured GOP in 2012 as well.

So the major problem for Republicans in 2012 is that the Tea Party and the other fringe elements of the GOP are organized and energized while the regular Republicans are dazed and befuddled after being out-maneuvered by upstart groups within the party. The GOP is no longer controlled or an extension of the Eastern Republican establishment as it was during the days of Rockefeller, Nixon and the first President Bush. The party is up for grabs. To complicate matters, the righteously conservative Koch brothers, estimated worth $44 billion, are prepared to contribute $88 million to conservative organizations and causes, according to a report on MSNBC. This is money that will not flow through traditional Republican channels but might actually be fighting against the party and its candidates to further the right wing cause and the Koch brothers’ union-busting, free-market interests.

The presidential year of 2012 is a time when the GOP avengers in the precincts and the convention hall could select an ideologically pure nominee but a weak candidate based on organization and the get-out-the-vote determination that the Astroturf Tea Partiers and other 100-proof conservatives have displayed in their drive to remake the Republican party. With a dearth of worth in both major parties, it’s easy to understand why independent voters are calling the shots and becoming, in effect, a third party without portfolio but with plenty of vote-pulling power.

So by default, the Republican Party just might hand President Obama and the Democrats exactly what they’re hoping for: an unelectable GOP presidential nominee.