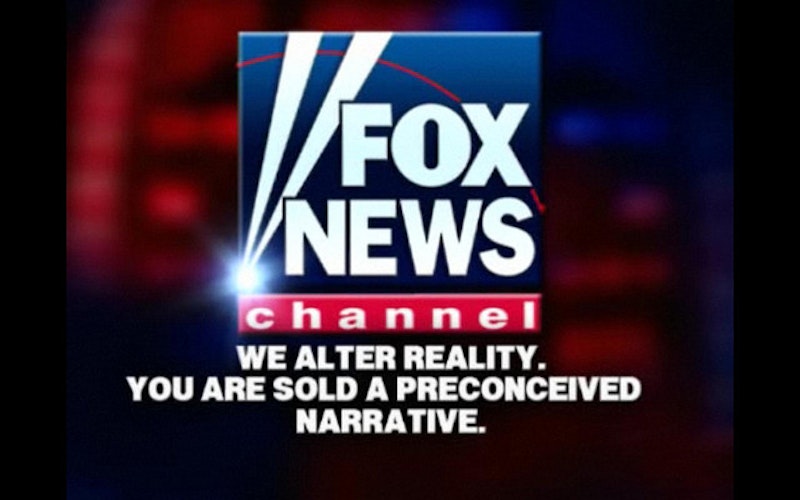 Along with the standard approach of debunking erroneous claims and distributing embarrassing video clips, Media Matters has set up a legal team to support anti-defamation lawsuits for people who have clashed with the network; hired researchers to go after Fox executives; and has recruited two journalists to write a book that will delve into the company's operations. They are also looking for ways to turn regulators against the Rupert Murdoch-owned company and to disrupt their interests in the UK, particularly the in-progress takeover of the BSkyB pay television company.

The first reaction on the left is likely to be gleeful enthusiasm for the more aggressive Media Matters approach. Given the scope and influence of Fox News in America, this will be welcomed as a chance to give them a black eye and confirm its conservative bias and lack of professionalism as a news agency. Indeed, according to an internal memo Brock provided to Politico, part of their goal is to convince people that Fox is not part of the media at all. It reads, “Fox News is not a news organization. It is the de facto leader of the GOP, and it is long past time that it is treated as such by the media, elected officials and the public.”

And while it's easy to agree with the sentiment, it's hard to imagine this strategy will be any more successful than past ones. Most people who are not part of Fox News' base are well aware that the company has a biased editorial slant. They know the company sells infotainment, and that the bread-and-butter of the network are its opinion-not-news, appeal-to-the-lowest-populist-denominator current events programs like Glenn Beck and his ilk. The problem is that millions of people watch and trust Fox News regardless of shoddy reporting and information.

Taking a look at the ratings for an average day will show you that Fox News outstrips the other networks' ratings by wide margins at any time of day and in any demographic. They often have three or four times the number of viewers as the second ranked network. These watchers are not likely to be convinced by anything that Media Matters digs up. Conversely, they may view the attack as a confirmation of their belief that liberals have it in for Fox because it is a lone voice of reason in a strongly left-leaning environment. Media Matters is already a dirty word around the network, so viewers will be predisposed to doubt any information coming from that direction and any actions that disrupt business interests will likely engender even fiercer loyalty to the brand. The executives at Fox are undoubtedly pleased to be the target of such a campaign.

A lot of people like Fox News, and though one may argue that they like it for all the wrong reasons, that kind of popularity still has power. However politicians and other leaders may privately disagree with how Fox runs its business, they will not be able to shut them out entirely without foregoing the very large slice of the electorate that Fox viewers comprise. Nor can other networks ignore what Fox is doing when it’s so much more successful at pulling in viewers that their own efforts. As for the public, if they haven't already seen how biased the news coverage is and how poisonous the opinion programs are, why should more evidence move them in any way?

The real problem is not Fox News, but the fact that there is such a large market for their particular brand of polarizing programming. While attacking the company might be the right thing to do, it’ll be futile so long as there are people who want showmanship over credibility, fear over reason, and scapegoats over difficult questions.