You definitely don't want to end up on either side of the current Republican divide. 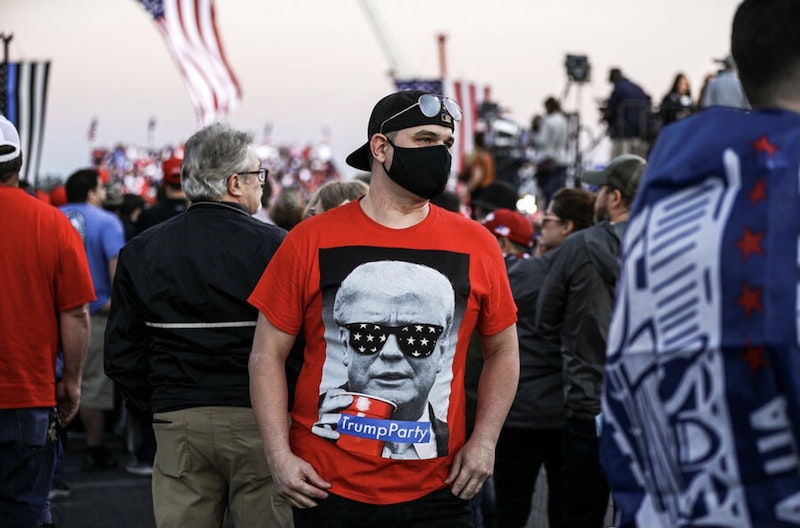 The split between Kevin McCarthy and Liz Cheney reached peak awkwardness last Wednesday as the #1 and #3 Republicans in the House, appearing together at news conference of the Party's congressional leadership, contradicted each other flatly, on live television, about whether Trump should continue to play a role.

The split had been acute since Trump secured the nomination in 2016. By that time many "traditional Republicans" had already become Never-Trumpers, though these were primarily former party officials (Michael Steele, for example), opinion journalists (Bill Kristol, Bret Stephens), think-tank intellectuals, and the like. Working Republican politicians in 2016 (Paul Ryan, say) couldn’t afford to simply ditch Trump, even if they thought his populist approach was incompatible with the traditional values of their party and was wrong on independent grounds.

Really, if they weren't stuck together by the fact that the intelligence of the American people can sustain no more than two alternatives in any given situation, or possibly by the fact that our political system has been stacked for centuries by the parties themselves, the Republicans would’ve split at least in two long ago. Perhaps the Democrats, whose amazing division between straightforward creatures of Wall Street such as the Clintons and socialists in the Bernie mode is at least as acute, would’ve split by now as well. These pairings are comical, and if you identify your ideology with that of either of these parties then in a Whitman way you contain multitudes, or more precisely flat contradictions, and you're likely to be emitting them too, or voting against your own fundamental principles.

The barriers to forming a new "traditional" or anti-Trump conservative party are probably insuperable, so the two factions will probably have to fight it out internally. Either way, the split between Trumpers and Never-Trumpers is extremely unedifying, and I’d strongly recommend ending up on neither side. If there was ever anything worthwhile about the Republican Party, it came from neither of these factions, both of which have already given us disastrous administrations.

The Republicans who went anti-Trump from the start are, by and large, what were once called “neocons”: national-security hawks, war-on-terror enthusiasts, pro-torture, pro-surveillance extreme statists a la Kristol. That the name "Cheney" is back is no coincidence. These people were bothered primarily not by Trump's racism, nor even his "make America great" nationalism (which they essentially share), but by his skepticism of Middle-Eastern wars and military bases around the world. When he was running in 2016, Trump kept saying that the Iraq war was "stupid" or "the biggest mistake in American history." Surely that was plenty right there to alienate the Cheneys. John McCain is the hero of the Never-Trumpers; if McCain had been elected president in 2008, we'd still be trying to get American troops home from Iran as we opened new military cemeteries.

The division in the Republican Party, that is, consists of war-mongers against racists. I'm at a loss about which is worse, or which has or is likely to inflict more suffering on more people.

Occasionally, one still hears "conservative ideology" described in terms of an emphasis on small government and individual rights. But today that has nothing to do with anything on either side of the Republican split. Cheney and Trump (well, and Bernie and Hillary) agree on this: the federal government ought to become much larger and more powerful. Both administrations (also Obama, to a slightly lesser degree) increased government spending, deficits, and the debt. On this matter, all viable American political factions now seem to agree. No wonder Paul Ryan has disappeared.

Both sides are nationalists, or jingoists, in different flavors. The Cheney side relentlessly emphasizes the greatest nation andmilitary the world has ever known, which they equate with one another. They make their fortunes in military contracting. They can justify absolutely any enormity, including the martial-law suspension of the Constitution known as the Patriot Act (Joe Biden and Hillary Clinton voted for it too). They're still working on their excuses for Abu Ghraib and still concealing black sites. The Trump side's nationalism, by contrast, is protectionist and isolationist, at least rhetorically, and would enclose the country in impregnable steel walls. It wants to keep alleged foreigners out, and vilify them if they get here. It seeks power by dividing various racial and class factions internally.

Even apparent constitutionalists, individualists, and libertarians such as Mike Lee and Rand Paul have cast their lot with Trump, and I can't think of an elected Republican official now who could be considered an advocate of small government and individual rights: Reagan's rhetoric, if not his reality. There ought to be a third faction in the Republican Party. I regard that small-government tradition as the only thing worth recovering in it, but what has disappeared entirely is irrecoverable.

Now, for people of this tendency, there actually is a political party, but the Libertarian Party is as moribund right now as skepticism of state power is anachronistic on all sides. You maybe forgiven for never having known, or for having forgotten, that Jo Jorgensen was the 2020 Libertarian nominee. She received just over one percent of the vote.

The Never-Trump Republicans have gotten airplay on CNN and MSNBC and in the Washington Post and New York Times out of all proportion to their actual pervasiveness among voters: even at this point they might amount to 20-30 percent of the 25-40 percent of Americans who identify as Republicans in one way or another. Liz Cheney has become Jake Tapper's hero, but you’renot going to win much of anything that way, as a third party or as a faction of the Republican Party. In this late winter, I'm not sure where Liz Cheney can go. But I'd think twice before endorsing her for the presidency or something: she was raised on Haliburton money. Don't make me re-narrate the GWOT.

The conclusion I'd draw is that the best thing about the Republican Party at this point is its incoherence and the likely ineffectualness to follow; you don't want to end up, or want your country to end up, in either of the dominant factions.