Me and the Historian’s Foolish Nephew

Intellectual life on the Internet. 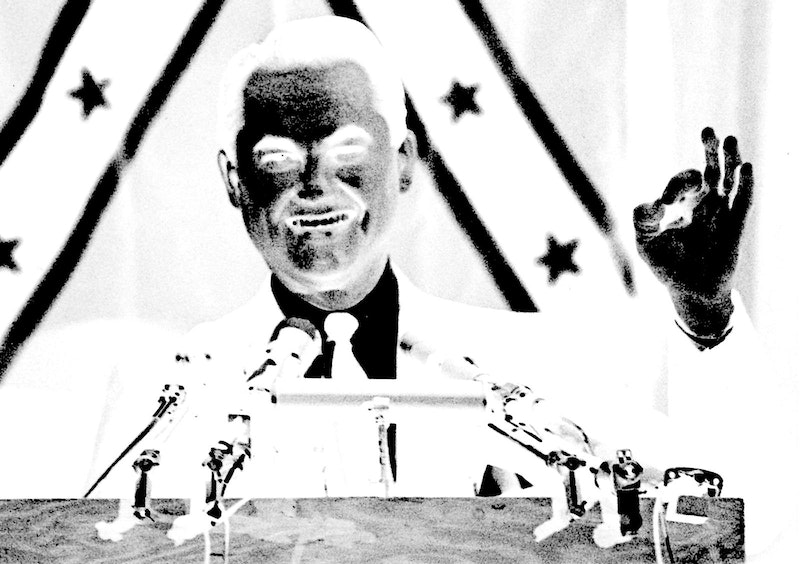 This guy went splat on me. I posted a tweet and he told me I was all wrong. Getting large in his manner, he pointed me to a book that I ought to read (this was via link to Amazon, with the book’s cover and title big on the screen). A bit after this he called me a douchebag, following up with a crusher of a point, the argument that would prove to me what a dunderhead I was and how I’d been trying his patience. He told me to take a look at George Wallace’s “post-judicial career as a federal judge.” But Wallace, bless him, had no such thing. He was an Alabama state judge and then he ran for governor, and after that he never looked back. I expressed the gist of this to my correspondent, inviting him not to respond and he hasn’t. Because splat, he made a fool of himself.

His feelings had been hurt, I think. When the man flourished the book at me, it was with a large-handed, benevolent air. The book’s writer was his uncle; my correspondent looked on this fact (or claim) as checkmate. The triumph appeared to set something free in his heart. As the wind scuds, his spirit scudded within him. He followed the tweet with another one and then another, a flurry. I heard about the movie that was based on the book, about what his uncle planned to do next, and so on.

In answering I shouldn’t have led off by telling him how Gary Sinise, star of the movie in question, actually spells his name, and I shouldn’t have posted this correction on a stumpy line all by itself—hence the “douchebag” from my correspondent. But he’d chosen to set me straight about my first tweet without bothering to understand what that tweet said, and in our follow-up tweets back and forth he ignored the answers I gave to his arguments. Then Mr. Densitude climbed atop his book and proclaimed himself mayor. So I shot him a good one. Patience runs out.

My first tweet had been this: “George Wallace never repented. He talked out of one side of mouth, then he talked out of the other. That was about it.” The first sentence is up on its own, with a paragraph break to set off. Not a bad tweet, though conventional in form. A thoughtful conservative had posted about repentance, with Wallace as an example. There was a slew of replies, none touching on a pet belief I have, namely that Alabama’s late governor cared less about race and more about votes. I went ahead and said my piece, and my correspondent sprang into action.

I won’t give the reasons for my Wallace theory here. They’re okay. I took an interest in the old cottonmouth a while ago and read some books. I can cite incidents and paint a picture of him. One has these topics, after all; most people who read their share of non-fiction are like that. I suppose the noteworthy thing here, the standout, is that I met a debater who thought that being a nephew could settle an argument of this sort. Yes, if you have to check Wikipedia (and I did to confirm Wallace’s non-status as a federal judge) you’re a fool to debate a historian. But all I had was a historian’s nephew, a grown man who had read his uncle’s book and now waved it at people without realizing he’d never understood the words. As Twitter situations go, this one seems humanly freakish but at the same time typical of the medium, and I offer it as a field report.