Misguided political outrage over the worst off among us. 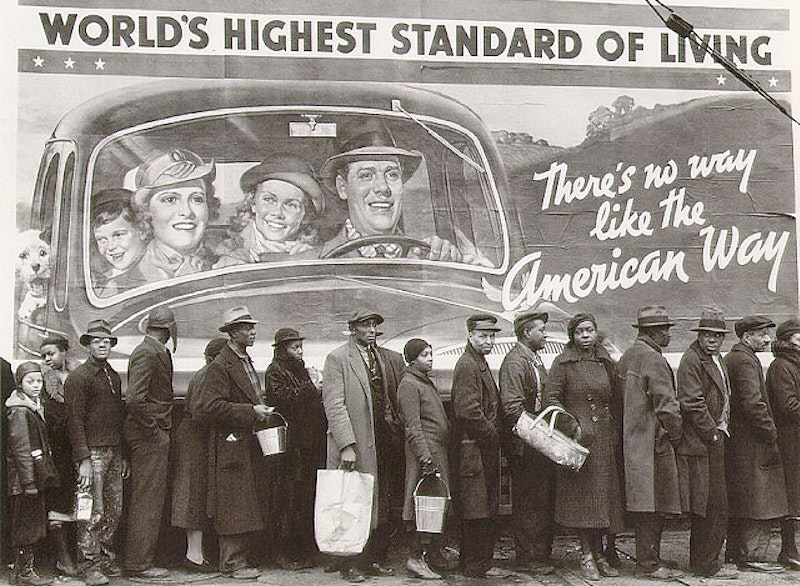 After a second reported lottery winner in Michigan had her SNAP benefits revoked, pressure has mounted for the state to become the first in the country to enact legislation against anyone who wins over $1000 from receiving food stamps. The predictable critics of welfare have relished commenting on this story, as at first glance it seems to fit into the convenient construct of parasitic and dishonest state assistance recipients taking as much of "our tax dollars" as they can. Following decades of pushing the myth of a "welfare queen" finally there's a real live example of someone who's unemployed, actually a millionaire, and continuing to receive assistance.

Of course the woman in question, Amanda Clayton from the Detroit area, isn't really a millionaire. Sure, she won "a million dollars," but according to The Detroit News, after taxes and other charges she's reportedly netted around $500,000. Still a very large amount of money by nearly anyone's standards, and perhaps it's something that should be evaluated when determining eligibility for programs such as SNAP. But the reality is that food stamps are hardly a windfall. A single person without children can generally expect to receive around $200 per month at the most, now usually loaded on a debit card that can only be used to purchase food and non-alcoholic beverages. The black market exchanging of funds absolutely occurs (and are thoroughly investigated and prosecuted as welfare fraud when discovered), but not with the frequency alarmists might like to believe.

Although this is the second occurrence of a similar situation in a relatively short period of time (in 2010 a winner of $850,000 was denied benefits after admitting he continued to receive SNAP assistance), the problem attracts a disproportionate amount of attention for its negligible social cost. There simply aren't that many jackpot winners in any state, and the majority aren't likely to be intentionally deceptive in order to collect such a comparatively small amount of money (neither Michigan winner was breaking any existing rule or law, though they were still denied benefits at the discretion of the state, which is evidence of the program working as it was intended).

The anger towards these recipients has little to do with any dishonesty or wrongdoing on their part, which is minimal at best. Instead it's about the sense of ownership many politicians, members of the media, and American citizens have over the lives of those who are perceived as owing their livelihoods to the kindness of the state. The standard is completely arbitrary and has nothing to do with how much money the person receives or how much work he or she does and everything to do with the specific kinds of assistance being received. So it's the programs like SNAP or TANF that are thought by many to only benefit the poorest Americans and those who can't or won't seek employment (despite benefiting people earning a range of income levels as well as full-time employees). The ultimate goal for most critics is either severely diminishing or eliminating these programs, but in the meantime they'll settle for demanding as much control as possible over the lives of those who rely on them.

In addition to scrutinizing every part of a person's background, education, lifestyle, and purchases (as was widely reported, Clayton had the audacity to buy a new car and a new home), welfare opponents would like to ensure that recipients never have a break from the economic realities that led them to collect in the first place. $500,000 isn't nearly enough to be "set" for life, especially if someone receives no other income and has outstanding debts. It's enough to make a few important purchases (such as shelter and transportation) and potentially have enough left over for a few years of security and relative luxury. It's intended to be a prize won only by a few, with the money passing through the lottery commission, which is a far greater drain on society than all of the least frugal EBT card users put together.

But that would mean Clayton’s extraordinary luck went unpunished. Just as with the push (falling flat in most states due to associated costs) to test welfare recipients for drug usage, the outrage is based on the belief that poor people don’t deserve any kind of privacy or relief from their condition. Poverty is often depicted as a moral failing with welfare recipients expected to submit to the strictest and most invasive levels of scrutiny as repayment for their reliance on public funds. It's both cruel and dehumanizing, and ineffective as a way to responsibly address the issues that create the need for these programs.