Super Tuesday's Dance of the Zombies

Nobody wants Romney, but nobody's stopping him. 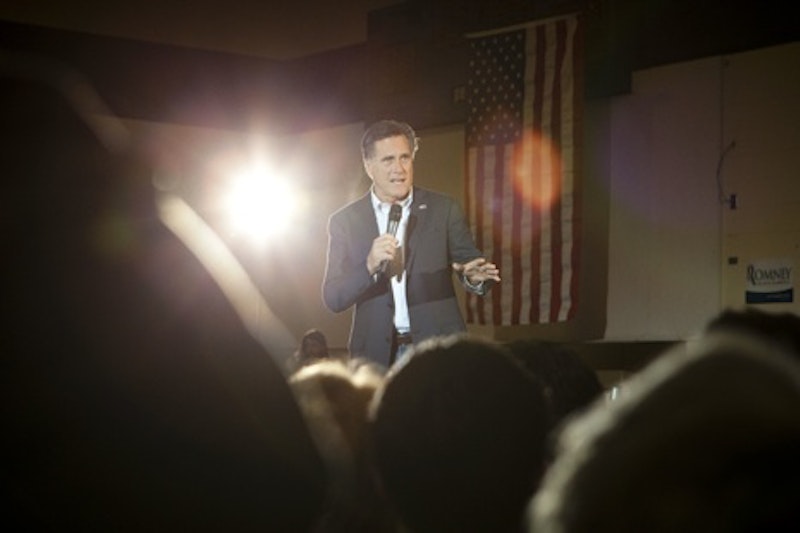 Three zombies, 10 states, no winner. There you have Super Tuesday. Yes, Mitt Romney is doing what a potential nominee needs to do, which is gather delegates: 211 on Tuesday, a big jump that brings him more than a third of the way to the necessary total. In fact he has more delegates than all the other candidates combined. But he isn't doing what a potential winner needs to do, which is make people want to vote for him.

The sort of frontrunner lost two of the night's big states and almost lost the biggest of them all. Rick Santorum won Tennessee, and Newt Gingrich won Georgia, which is where he's from.  Romney won Massachusetts, a decent-sized state whose Republicans seem to have forgiven him for having been their governor. If not for Ohio, Santorum's campaign would be able to say that on Tuesday their man was the only candidate to win over an electorate that 1) didn't consider him to be a member, and 2) was larger than a picnic party. But Romney won Ohio and Santorum lost. Just barely.

In Ohio, Romney and his allies spent four times as much on TV ads as Rick Santorum and his allies, but the two candidates still wound up neck and neck: 38-37 percent, with just 10,000 votes separating them. To be really savvy about it, the Romney side spent $8.76 per vote in Ohio and won, and the Santorum side spent $2.13 and almost won. Romney can dig up more money, but the only enthusiasm coming his way is... well, there is none. There's just a slowly growing dribble of Republicans who are willing to vote for him because he's the product their party is stuck with. Santorum can dig up enthusiasm among the slice of the party that likes big-fisted men who get mad about contraception, Muslims, and college. But he hasn't dug up much money and not much of a campaign organization. Hence, two zombies. One of them—the one with the money, of course—will shuffle across the finish line this summer. Then his knees will break backwards as he tries to run against a candidate who belongs to the living.

The third zombie is Newt Gingrich. Out of the 21 contests in which he has appeared on the ballot, there have been just three in which he managed either first or second place. Georgia is the latest of these. Santorum didn't do much work there and Romney outspent Newt by just 50 percent, so some dutiful campaigning gave Gingrich a home-state win of 47 percent. Now his campaign spokesman is saying Gingrich has to win Alabama and Mississippi next week if he wants to keep being a candidate. The idea is that Newt, having won South Carolina, Georgia, and the Florida Panhandle, is the candidate of the Deep South or he is nothing.

Does Newt agree with his spokesman? Will Newt agree with his spokesman next week if  Alabama and Mississippi fail to come through? Nobody knows. But the remaining Deep South contests have 380 delegates between them. So, assuming that Gingrich wins every single Deep South delegate still available, he will have 70 more delegates than Romney has now, assuming that Romney never again wins another delegate. That's not encouraging math, and there won't be any debates to perk up Newt's standing. The Newt campaign will continue to be a study in decomposition, with a special angle on how long a mouth can keep working without living tissue to support it.

I really should say something about Ron Paul. I'm told he did well in Vermont and Virginia, meaning that he managed second place in both. In Vermont he was just one point ahead of Santorum, and in Virginia the only other candidate was Romney. There Paul took 40 percent of the vote, a lot more than polls were predicting and the highest total he will ever see in any contest outside his congressional district. But pundit Larry Sabato notes “the 6% turnout was the lowest of any GOP presidential primary in Virginia history.” That number isn't just historic, it's freakish. I predict the word will serve as the epitaph for this year in Republican politics.