Squatting on the Airwaves

Maher and Limbaugh join forces against the little people. 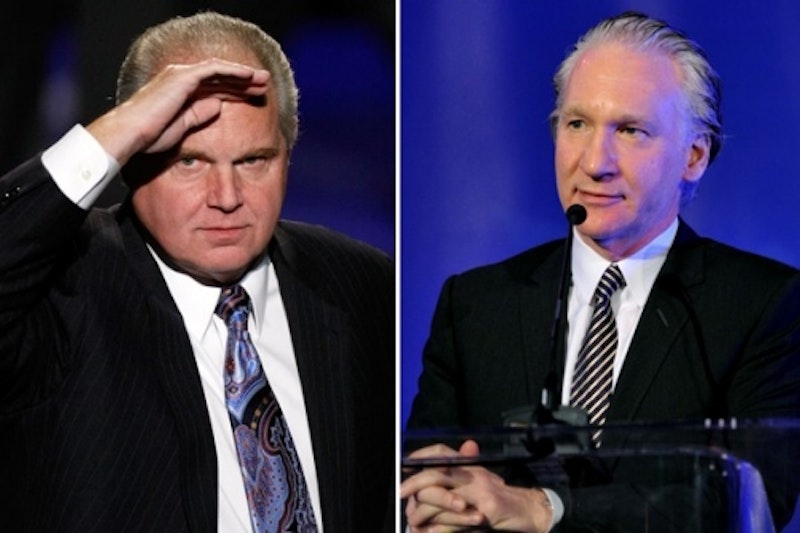 Predictably, a couple of weeks ago Rush Limbaugh looked down the barrel of his microphone and unleashed a slew of stupid, offensive, bullying shit. Less predictably, his stupid, offensive, bullying shit resulted in a satisfying backlash. Under pressure from customers and activists, more than 40 local and national sponsors have pulled their ads from Limbaugh's radio show. Some Republican politicians have even mildly suggested that calling women sluts for using birth control is perhaps not something that conservatives necessarily want to say out loud during an election year.

Again, a satisfying outcome. Liberal pundit Bill Maher, though, doesn't find it so. Maher agrees with Limbaugh on little if anything, but he will defend to the death his right to pontificate unpleasantly. Or as Maher said on his show:

Maher has an obvious stake in seeing that pundits aren't made to "disappear"—he has himself been criticized and targeted for using sexist slurs to characterize Sarah Palin. Pundits of the left and the right can join together, apparently, to affirm the punditocracy's God-given right to make people squirm. Especially if those people are women.

Be that as it may, I think Maher may misunderstand "the system," and, indeed, the role of free speech in our society. The First Amendment guarantees everyone the right to voice opinions—even vile opinions and dangerous opinions—without government reprisals. Limbaugh can call a Georgetown law student a slut, and the government isn't going to prosecute him for it. Folks on the right can mutter darkly about Obama being a covert Islamic agent and suggest he's a traitor, and no one will knock on their door at night to drag them off to Guantanamo. That's America, at least in theory. You can say whatever you want. It's, ideally, a free country.

But there's a big difference between "You have the right to say whatever you want," and "You have the right to say whatever you want—and be showered with obscene amounts of cash for doing so." Limbaugh has gained massive support from advertisers not because those advertisers are committed to the beauty of his vituperative free speech, but because he has a big audience. They think he's good for business. Suddenly, a bunch of their customers told them (via the speech that is free) that Limbaugh was not good for business. And so those advertisers dropped him. Why does Maher think that that's gaming the system, exactly?

The answer's simple enough. Maher thinks it's gaming the system because "the system" refers to the network of established pundits who have a special dispensation to squat on the airwaves and spew whatever nonsensical bullshit they choose. Maher, Limbaugh—they speak, we listen, and advertisers shovel wads of bills like wriggling worms into their upturned, open beaks. It's natural; it's beautiful. Either salute it or shut up.

People pushing back against Limbaugh—and in the past, against Maher—aren't willing to do either. Maher says it's wrong to make pundits "disappear," but most of us aren't actually all that visible or audible in the first place. Limbaugh and Maher have a platform from which they can drive public discourse and even, sometimes, public policy. They like that power, and who wouldn't? But when lots of less well-situated people join their little voices together to contradict them—well, that’s different. It makes them uncomfortable.  Which, it seems to me, is a feature, not a bug. As Maher says, everyone should be made uncomfortable from time to time in a democracy.