Andrew Breitbart and His Eulogists

The new media likes to talk about itself. 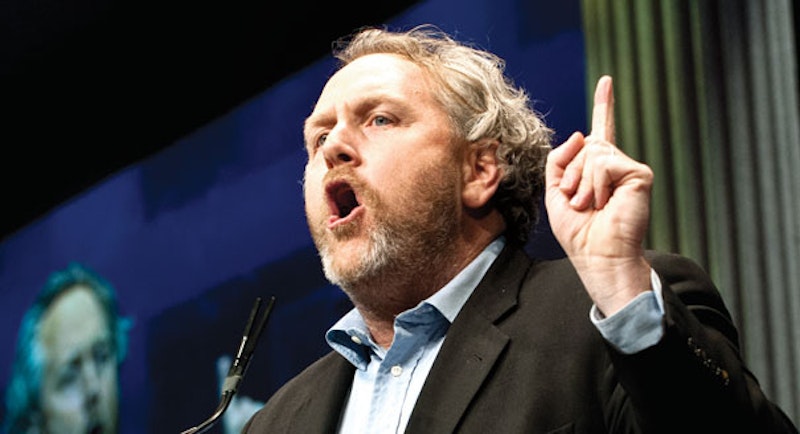 Rush Limbaugh made an ass of himself last week, as he often does. In consequence, the death of Andrew Breitbart had a half-life short even by the standards of the Internet news cycle. There's apparently only room on the web for one right-wing pundit spat at a time. You can opine on Breitbart's legacy or sneer at Rush's misogyny, but doing both at once is too soul-killing for even the most soulless pundit.

The speed with which Breitbart's communal eulogy has effervesced into its respective Internet archives is a strikingly neat self-refutation of its own main thesis. That main thesis is that Breitbart's death was an event that should be of actual importance to some range of people who were not his friends or family. David Frum insists, "It is impossible to speak nothing of a man who traced such a spectacular course through the contemporary media," and goes on to lament that "It’s difficult for me to assess Breitbart’s impact upon American media and American politics as anything other than poisonous." Conor Friedersdorf characterizes him as "a singular figure unlike any other in American politics or Web publishing."

Andrew Sullivan goes even further in his quest for meaning, arguing that Breitbart's early death is a sign of the intense pressure faced by the new media blogocracy. Constantly checking Twitter and site stats, barking 24-7 after the latest culture war blip, Breitbart was, apparently, crucified upon the cruel cross of his Blackberry.

"Human beings were not created for that kind of constant unending stress, and the one thing you can say about Andrew is that he had fewer boundaries than others. He took it all so seriously, almost manically, in the end. The fight was everything. He felt. His anger was not feigned. He wanted to bleed and show the world the wounds. He wanted to scream. And he often did. And when you are on that much, and angry to that extent, and absorbed with that kind of constant mania, and obviously needing more and more validation, and on the online and real stage all the time, day and night, weekends and weekdays... well, it's a frightening and dangerous way to live in the end. He is in that sense our first new-media culture-war fatality. I fear he won't be the last."

The title of Sullivan's post is "Breitbart—And Us." It's a telling phrase. Because… who is that "us" exactly? When you first read it, it seems like it's supposed to mean, you know, "us"—everybody and their siblings.

But by the end of the piece, it's clear that we're not talking about a universal "us." Surely I can't be the only one on the planet who doesn't own a Blackberry. In fact, when Sullivan says "us," then, what he actually means is "us, the really successful new media pundits." Breitbart's death is significant to Sullivan not because it offers some sort of universal warning about the human condition, but because Breitbart and Sullivan are (despite differences in politics) basically a lot alike. They're extremely successful people in the same industry. It's not exactly a revelation that driven people obsessed with their jobs are in danger of heart attacks. But it hits Sullivan close to home because Breitbart was a driven person not just in any job, but in the same job Sullivan has.

It's natural enough to be interested in, and to want to talk about, your colleagues. It's water-cooler gossip; everybody does it. But since pundits do so much talking in public, I think it can be easy for them to forget that their water-cooler gossip isn't necessarily transcendentally important. I can't say I followed Breitbart's career closely. But you read his eulogies, and what do you get? A personally charming and generous muck-raking journalist with shoddy standards and a big mouth, who managed to land a big story or two, slander some innocent people, and mostly generate a lot of hot air. It's a character that was hoary in 1951 when Kirk Douglas played it in Ace in the Hole. The fact that Breitbart was one of the people to bring the archetype into the digital era is of interest primarily to those in the industry. To everybody else, it's just the latest iteration of a familiar truth; e.g., whatever venue you find them in, journalists are scum.

Andrew Sullivan likes to tout the digital media's escape from the hidebound orthodoxies and navel-gazing of traditional media. But if the rapidly evaporating Breitbart furor shows anything, it's not that the man was a visionary pioneer, or that he epitomized the decline of our culture, or that our age is more stressful than any other. Rather, it's that online journalists are every bit as self-obsessed as their print forbearers.