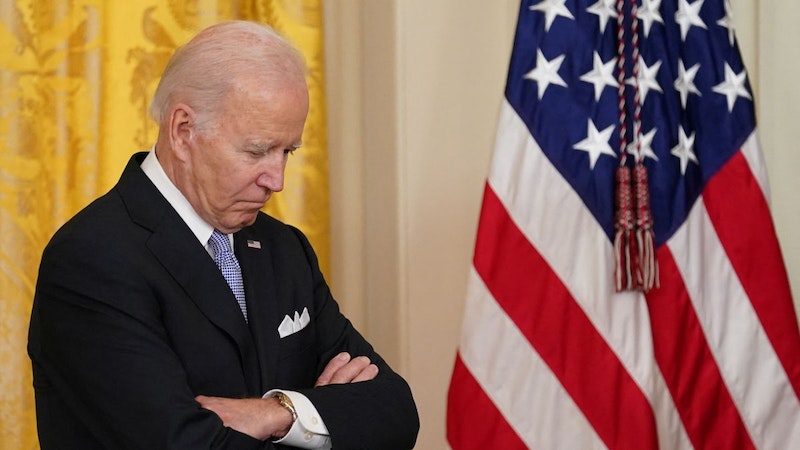 Joe Biden joked on his recent trip to Spain that, in the light of his approval ratings, the worst inflation since 1981, and record-high gas prices, he might stay in that country. On that same trip, French president Emmanuel Macron had to explain to the American president that Saudi Arabia, despite Biden's entreaties to Riyadh to produce more oil in order to lower American gas prices, was about maxed out on oil production. You have to wonder if any close advisors tried to explain to Old Joe that it wasn't the best of ideas to say he was going to work to make Saudi Arabia a "pariah" nation, and that their government, which has "very little social redeeming value," has "murdered children." The reality is that we don't have enough wind farms and electric cars yet to start slapping around the Saudis, who've shown some signs of progress lately.

Biden gets that now, and he's making the right strategic decision to travel to Riyadh next month, but another barrier he faces is the fact that amping up oil close to 100 percent capacity can do serious damage to refinery equipment. One thing I'm looking forward to is Fox News' Peter Doocy's questions to White House press secretary, Karine Jean-Pierre, when that time comes. My recommendation is that he ask her about this Biden quote: "America does not check its values at the door to sell arms or buy oil."

Biden wrote a performative letter to the major oil companies asking them to ramp up production, an empty gesture in that he didn't offer to ease any regulatory measures for the firms, boost pipeline infrastructure, or take any action at all that would bring more refineries online. That would run counter to his administration's push to wean the nation off of fossil fuels—before we have a replacement for fossil fuels—which is why Biden's taken measures aimed at lowering oil production in this country. Because the President has surrendered his policy options, he's left to rely on trying to shame the energy companies into lowering prices by claiming they're experiencing record profits, which won't bring gas prices down one penny. The President also spoke sternly in a public address to "the companies running gas stations and setting those prices at the pump": "Bring down the price you are charging. Do it now. Do it today." This what the Biden administration considers a "strategy."

The buck used to stop at the Oval Office, but now it stops at the Kremlin. According to Biden, astronomical gas prices are the fault of Putin and the oil companies. As he put it, "There is no question that Vladimir Putin is responsible for the intense economic pain the American people are feeling." But Putin didn't give us the $1.9 trillion American Rescue Plan. The general consensus is that the measure accounted for one-quarter to one-half of the current inflation.

Biden wrote in The Wall St. Journal that he'll stand aside and let the Federal Reserve handle things: "Past presidents have sought to influence its decisions inappropriately. I won't do that." But then he sought to influence the central bank's decisions by supporting The Federal Reserve Racial and Economic Equity Act, which Rep. Maxine Waters (D-CA) introduced in April. One of the provisions of that bill, which passed in the House of Representatives in June, would mandate that the Fed "include a diversity inclusion component" when rating banks, and require "diverse leadership" of the central banking system. To get a high rating under the proposed law, banks will need to provide diversity and inclusion training, hire a diversity and inclusion officer, and institute hiring practices that encourage diversity and inclusion. So now Jerome Powell, who's asleep at the wheel at his job of controlling inflation, may be getting an extra job that was invented by publicity hound/professional agitator, Maxine Waters, that would have him use his financial tools to address past injustices. What's next? The Fed used to fight transphobia?

Politicizing monetary policy and financial regulation because Biden doesn't have the backbone to say no to his party's fringe element (or anything involving "equity") is dangerous. I hope it works out better than the last time the Democrats tried something similar. Bill Clinton's Community Investment act, which was designed to get minority people loans without the usual documentation by giving them subprime loans guaranteed by the federal government, culminated with the great 2007-2008 economic crash.

Fed Chair Powell waited too long to raise interest rates, but at least he doesn't play the "blame the Russians" game like Biden. When asked if Putin is the cause of runaway inflation, he said: "No. Inflation was high before the war in Ukraine broke out." He went on to say that the main cause of inflation is high demand, while making no mention of Biden's spending package that coincided with the beginning of escalating inflation.

As gas prices rose, Biden was talking about spending $100 billion on public transit to take cars off the road. He's also talking about a three-month gas tax holiday (Barack Obama once called this a "gimmick") that would expire a month before the midterm elections, by which time voters will have forgotten all about the $10 or so a month that the tax holiday saved them.

The American economy’s lethargy, which could be headed towards stagflation, rests squarely on Biden's shoulders. European countries much closer to the war in Ukraine are suffering from significantly less inflation than the U.S. Biden’s politically-motivated stimulus package was introduced into an already overheating economy, with predictable results. It's become clear that the Biden administration was full of it when it told the public, repeatedly, that the inflation was "transitory" when it should’ve taken action. The time to tame inflation is before inflation begins, and now it's too late.

High prices at the pump are supposed to be Putin's fault because Biden tells Americans these are wartime conditions. But he refuses to put the nation on a wartime footing, which would open up a number of options to stimulate domestic petroleum production. That's because he's declared war on the petroleum companies. When oil and gas executives visited the White House in June, Biden refused to attend the meeting, choosing to meet with wind industry executives instead. Maybe those wind execs can get the President out of the jam he's in now.