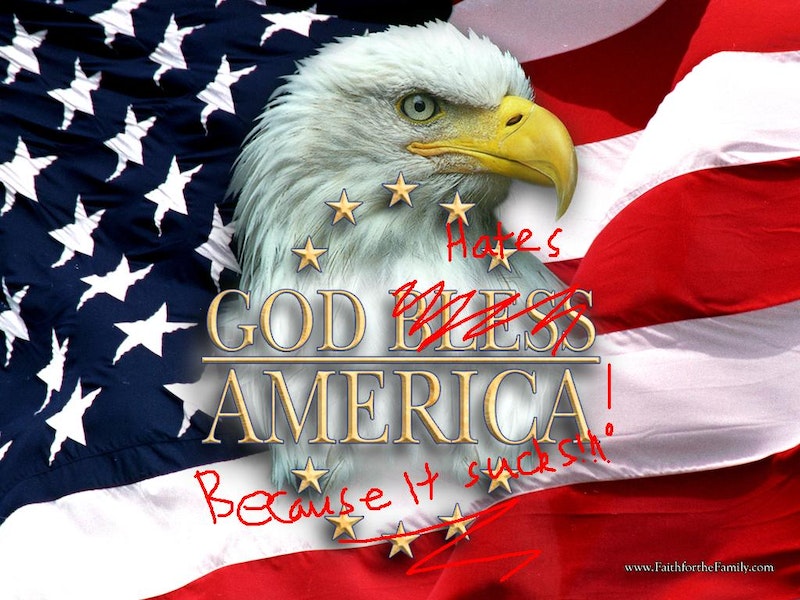 It appears there’s a chance our Congressional representatives will decide en masse that financial apocalypse is preferable to a possible primary challenge. What this would mean exactly is unclear; I guess the first consequence would be a stock market nosedive. Longer term, presumably, it would involve a downgrading of U.S. debt, which means we’d have to live within our means, which would result in a sudden and vicious fall in our quality of life. Unemployment would skyrocket, production would grind to a halt—we’d be looking at a massive contraction of the economy that would make FDR sit up in his grave and say, “We have nothing to fear but…HOLY SHIT!”

Obviously, this would be bad, and nobody but nobody wants this to happen… not even the wind-me-up-and-I-drool-great-gobs-of-stupid animatronic joke that is Michele Bachmann. If the Dow plunges to 3000, I lose my retirement savings, my kid can’t go to college, and quite possibly my freelancing income will dry up. My wife could lose her job. We wouldn’t be able to make our mortgage payments… though maybe that wouldn’t matter so much if all the banks holding the mortgages collapsed. So we’d have a place to stay at least. But, yes, I would prefer overall to have a retirement and a job and to send my kid to college and just generally for things to continue as they are with my fairly affluent lifestyle in the Greatest Nation on Earth, thank you very much.

And yet. Affluence, Greatest-Nation-On-Earthing, strutting about the globe with my kid’s college fund and my new Prius… is it really all good? Or could there be some upside to financial apocalypse?

If the US did default, as I said, it would mean a huge drop in standards of living, definitely in America, most likely throughout the entire globe. China’s economic boom, fueled in large part by US debt, would come to a screeching halt. People everywhere would buy less and make less. Using fewer resources would be a major boon for the planet. We’re probably too far along at this point to actually do anything about curtailing global warming, but still, it’s hard to believe that the assembled frogs, whales, and plant life wouldn’t appreciate a reduction in emissions, plastic crap, and deforestation. If humans regress to the Stone Age, the only things on the planet that’ll really be upset are humans and, possibly, stones. (Okay, Siamese cats and little lap dogs too. But that’s it.)

The other major benefit of the U.S. buying less of everything is that it would mean, logically, that the US would buy fewer guns. In 2010, the U.S. accounted for 43 percent of the world’s defense spending. It’s a familiar statistic, but its consequences remain staggering. Because of that vast outlay—because, in short, our standard of living is so high that we can’t figure out what to do with our money—we are currently fighting at least three wars, and have troops everywhere on the globe, from Germany to Korea to god knows where else. If a Muslim terrorist shakes hands with a drug dealer in the wilds of Northwest Upper Slabovia, we have the will and the excess capacity to bomb a wedding party somewhere nearby. If a client state defies us by egregiously oppressing its neighbors, we can speak to them sternly and, with a grave shake of the head, send them only twice as many missiles as they asked for.

It’s almost certainly true that the world would be less peaceful if America wasn’t playing global policeman. And, of course, if our standard of living goes down, everybody else’s will too. Still, despite all the good we do outside of bombing wedding parties and arming oppressors, there must be a moment or two when folks in the rest of the world look over at us, sitting on our nuclear stockpiles, and wonder, if only for an instant, how things might be different if we had something to worry us other than our neighbor’s business.

The U.S. isn’t going to collapse because of this debt ceiling nonsense. If we did, it would be bad for me, you, and the vast majority of people on earth. Getting punched in the face would hurt. But that doesn’t mean we don’t deserve to be punched in the face.