Clay Travis: "Everyone Should Just Chill Out Over Coronavirus"

If journalists want to react against the media's doom and gloom, they need to exercise caution. 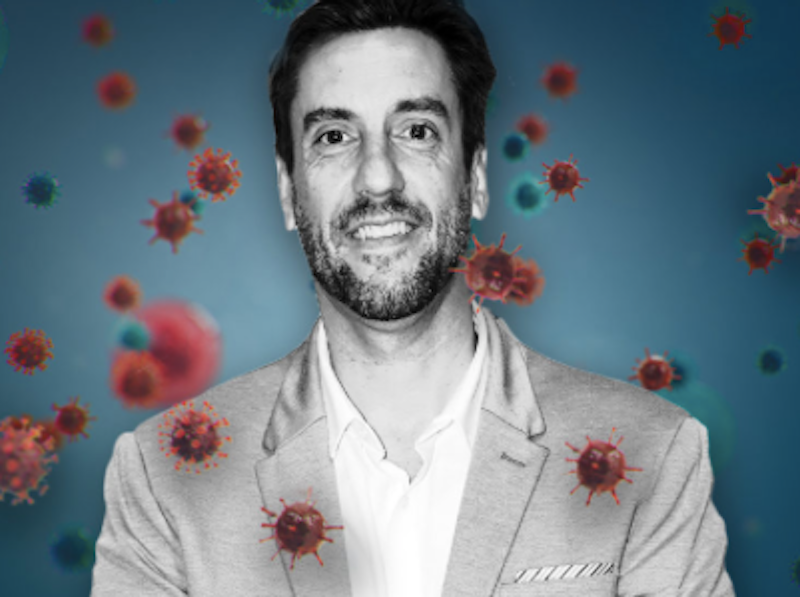 Clay Travis is a sports journalist, writer, television analyst, and the morning radio show host for a nationwide FOX Sports Radio from 6-9 a.m. On the March 2 episode of his podcast,Outkick the Show, he said, "I do not believe that the coronavirus is going to destroy our country. I don’t believe that it’s going to impact hardly any of us at all.” Travis is a big sports bettor—he also hosts a betting show—so he learned long ago that you can't win them all, but "hardly any of us at all"?

Outside of Fox News, there hasn't been much optimism attached to the coronavirus story since that day when we seemed to go straight to DEFCON1 overnight. One of the podcasts in my regular weekly rotation is Clay Travis' sports-oriented show that also covers current events. For weeks now, he's been offering a daily pep talk about how we're going to lick this pandemic because we Americans are tough, and that the virus has been overhyped. I'll admit, such talk has given me some comfort.

Several times over the past few weeks I've listened to the podcast for the sole purpose of boosting my morale. It's not that I ever really felt Travis’ rosy assessment was accurate or balanced. It just made me feel better, like someone who goes to church but perhaps doesn't believe everything the preacher tells them. And Travis sounds like a preacher recently.

But Travis’ happy talk started to make me feel uneasy. I began to question my faith, especially in light of the fact that Travis is not an epidemiologist, nor does he have any particular expertise in the health field. And there's the fact that the podcast host addresses the issue in a way that reminds me of what motivational speaker Tony Robbins sounds like when he's all revved up in his fervent life-coach mode.

So I decided to give his words, on both his podcast and Twitter account, greater scrutiny. The results are a study in shoddy journalism. For example, "Flu is far more dangerous than coronavirus,” Travis tweeted. Far more? Really? Then why are we all locked down now, and I wonder if that has any impact on the infection rate.

From the beginning of his reporting on the topic, Travis accepted the Chinese government's pronouncements on the decreasing number of new COVID-19 cases. We're to believe a tyrannical, secretive regime after it had already been revealed that Chinese whistleblowers spreading the word of the virus had disappeared? Travis is a lawyer. He should know better.

Travis' tweet on March 20 suggested that COVID-19 often resembles the common cold, and he told his over 650,000 followers to "chill out." On the same day, he tweeted that South Korea has provided an "excellent template" for how to erase the virus. But the South Korean template's based on extensive testing, which the U.S. lacks the capacity to do. I suspect that Travis knows this, but tweeted it anyway.

On his April 9th podcast, Travis cited the 80,000 deaths from the flu two years ago while mentioning the updated projection that COVID-19 will claim 60,000 lives this year. He's trying to put our current situation into context, and I'm sure many of his listeners bought it, but we've had to lock down the nation to achieve that. Had we gone about our business like in any other flu season, as it appears Travis would’ve preferred, it's scary to think about what the numbers would look like now.

Clay Travis is a smart, arrogant blowhard who enjoys nothing more than lampooning the excesses of the social-justice-oriented Left and talking about how rich he is. He says he voted for Al Gore, Obama, and Gary Johnson, not Trump. But just like "alleged non-conservative" Dave Rubin, he never criticizes Trump, which looks like part of a business plan. Travis knows that much of his appeal to his conservative fans is premised on still presenting himself as a Democrat. That way he can sell himself as a "reasonable" non-Republican.

Travis scolds the "blue checkmark loser brigade" for spreading the most pessimistic models for projected deaths, while conveniently ignoring his own over-optimism and its potential ill effects. He fashions himself as a truth teller surrounded by partisan hacks, but he's spun the coronavirus story hard to please his audience. I can understand reacting against media hysteria like the USAToday story with the headline, "10,000 dead of coronavirus in USA, more fatalities than six wars combined,” but not if it means going to the other extreme. Travis should have at least emphasized the need for social distancing, starting weeks ago, but he was too busy talking about how South Korea is a model the U.S. can follow, and comparing COVID-19 to the common cold.