And death of a smoll bean. 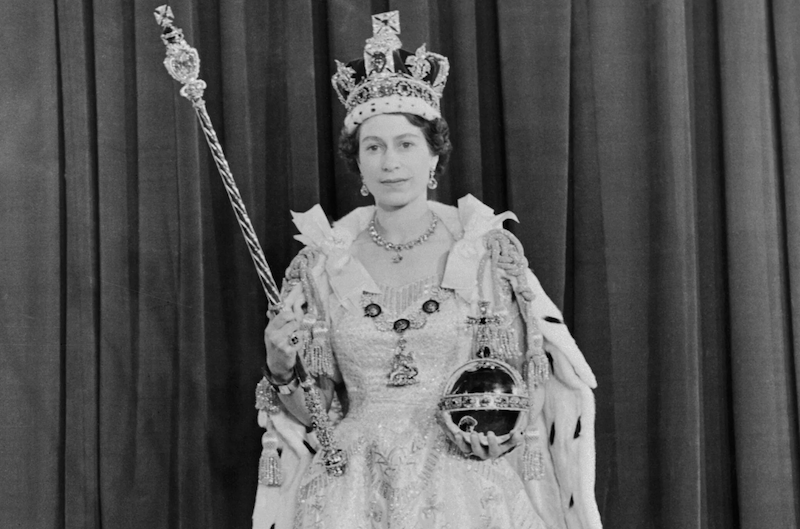 They really should give everything back. Make a show of it; the Brits have that kind of chutzpah. The King might use the returned items as centerpieces for his state visits: he likes the Elgin Marbles so much that he has to pay them honor there in Greece; the same for the Great Star of Africa in Africa. But give it all back. Don’t quibble over whether the Great Star was given to Britain or taken by it. Once an empire’s done, it looks like a smash-and-grab operation, and that includes the gifts. Just hand them over and see if some healing takes place.

The Brits (mainly the English) are globally unpopular for attacking and exploiting other peoples. The disgruntlement crops up in Britain itself, where much of the public comes from countries that got rolled. These points and more were underlined when my Twitter feed decided the queen = Britain = empire = Anglo whites despoiling non-whites, plus the Irish. Abuse pummeled the newly-dead Elizabeth, righteous abuse. It punched up so vertically: global south gave it to global north, plus there was the native-born class resentment of British anti-monarchists. Elizabeth agreed to be a symbol, so this sort of thing happens. The people in question saw Elizabeth on the money, the stamps, the wall above the window at the post office. They knew she was there because of the British Empire or the British establishment. When they saw her face, they knew who was on top in the world. Now comes their vengeance.

But I insist that Harold Wilson, and not Elizabeth, decided Britain’s treatment of Nigeria during the Biafra crisis of the late-1960s. A notorious tweet said Elizabeth deserved to die in excruciating pain, and the author then revealed that “half her family” had fallen victim to Nigeria’s persecution of the Igbo people; the tragedy ended with mass civilian deaths when the Igbo started their Republic of Biafra and were ground down by forces relying on British-donated weapons. This disgrace belongs to the British people and their political leadership. Elizabeth was forbidden to tell either one what to do; and if she could’ve spoken, who says anybody would’ve listened. A “smoll bean”? Well, if everybody else has got it wrong, expecting one constitutional monarch to stop them—it’s kind of rich. A great leader might’ve swung matters, somehow staying within the lines while getting policy and/or public opinion properly arranged. But that’s a movie, not a political system.

Elizabeth probably skipped the above rumination and went straight to living her life as she knew it, which was as a dutiful safety pin holding together the drapings of the British social order, for whatever the endeavour’s worth. Duty keeps coming up in the praise for her (lofty: “Queen Elizabeth II Understood the Weight of the Crown,” or more down-to-earth: “Queen Elizabeth II Did Her Job”), as does her politeness under socially rugged circumstances (meeting Trump, for example). She had to keep passing the time with people, and she did it for the good of the realm, bless her. But in fronting for Britain’s constitutional set-up, she also fronted for the country’s operations abroad. Her face was everywhere, and now people who may or may not get mad at Harold Wilson definitely get mad at her.

Somebody wrote about Elizabeth’s memory and the Confederate flag as if they were the same sort of thing. I’d say a woman can be a symbol, and a flag’s a symbol, but a woman isn’t a flag. For me disgrace and degradation of a person’s memory are tougher things than a flag burning. A face makes a difference, I suppose. That’s one way or the other, because if Trump’s ever convicted, I’m prepared to crow about it. But Trump did his deeds, whereas Elizabeth’s role is more a trick of the mind. She’s prominent to view, so she’s blamed; or she’s not even blamed, she’s just the trigger for abuse, a reason for rants and general hopping up and down. I prefer the “dutiful monarch” coverage, pending details on Andrew and prosecution.

But she wore the crown and the big diamond. Give them back and let the smoll bean rest.