Obama and Trump fictionalized our politics, but Biden's less effective at it. 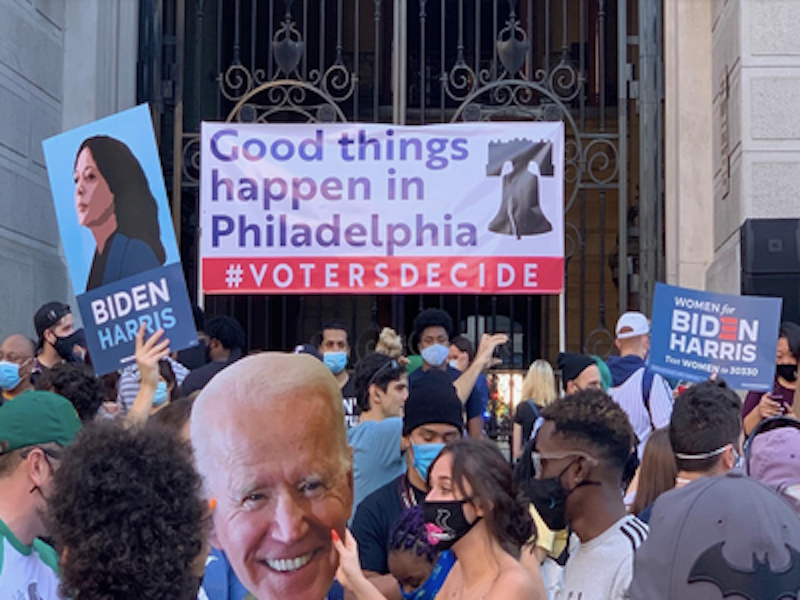 The hardest part for many people about Trump's victory in 2016 was that it fucked up the narrative: the American narrative where we live out the meaning of our creed, the spiritual narrative in which the arc of the universe bends towards justice, the Obama role-model narrative where seeing people who allegedly look like you with political power (or in super-hero movies etc.) changes everything by dramatically enhancing your self-esteem. Somehow Trump's victory introduced an existential crisis for everyone in general and no one in particular. I wonder whether you lost track of who you are in November 8, 2016? No? But somehow "we" did. We stopped being "us." "We" as a nation misplaced our "soul," which had to wait for Saturday for restoration.

That's one narrative. I heard another as I waited in line to vote in '16 in rural PA: "If Hillary wins, we don't have a country anymore. America's over." Trump was, for a lot of rural Pennsylvanians, as heavily weighted with symbolism, as embedded in grand existential narrative constructions, as he was for the Philadelphians who took to the streets last weekend to celebrate his defeat. So was Hillary, who took on a preternatural evil power. She was not so much a person as a force or emanation of some sort.

What might have been most conspicuous Saturday in Philly as I walked around the celebrations at the Convention Center, City Hall, and Independence Hall, was the current symbolic power of Kamala Harris, not for what she's done, exactly, but where she's from and how she looks. There were posters of her everywhere; her name was as frequently chanted as Biden's. She has immediately gotten the Obama treatment: converted in a Shepard Fairey quasi-socialist-realist style into what’s an icon (in the Russian Orthodox sense), and incidentally flattened into two dimensions and simplified into full comprehensibility.

One reason Harris is gaining all this symbolic weight is that Joe Biden is singularly unsuited to the role of historical avatar and redeemer. The campaign came down, supposedly, to a fight for the "soul of America." But contrast Biden's barely-competent acceptance speech to Obama's soaring flight of rhetoric from 2008. The best thing about Biden is that he doesn’t personally embody a whole era, the identity of a whole nation; he’s not "the future." This is the current role, rather, of Harris.

I think American politics entered an extremely or merely symbolic (perhaps "postmodern") phase with Obama's first campaign. It somehow succeeded in associating a simplified version of Barack's countenance with the word, or the feeling, "hope." 2008 was a hopeful moment in many ways. But hope’s not a permanent condition; it's vague, really, and hard to sustain consistently. The hope people felt in '08 drove the despair of '16, as the nice little story seemed to break down. Suddenly, you seemed to be left in a meaningless universe or felt your identity disintegrating. You cried for days, but what had really changed right then and there for you? Only the narratives and the pictures.

Let's say you were operating both times round with highly simplistic symbol systems that were sold relentlessly to you on television and that largely originated as political strategies: big, big stories supposedly encompassing all of American history and articulating American identity. This environment is populated with particular human bodies that generate a penumbra or cloud of hyper-generalized, entirely abstract meanings that are really not going to put any food on the table. Bill Clinton and George W. Bush were more or less particular fellows with certain political talents. But Obama and Trump were, apparently, historical avatars. Clinton and Bush governed, they compromised, they succeeded, and they fucked up. Obama and Trump embodied the best or worst of us, depending on your point of view. They merged millions of people into their tiny heads.

When Hegel saw Napoleon, he saw "history on horseback," and thus we saw Obama and Trump. Now perhaps you think it is natural or inevitable for us to wield one another as symbols and fictional characters or supernatural forces in this way. Perhaps you will remark that politics always traffics in symbols. But there are certain drawbacks to this approach.

First, though this is a complicated matter, the narratives and the use of people as symbols are fictional. You can believe with all your heart (maybe on the basis of campaign ads) that we’re just about to be redeemed or that things are about the get much better or that things will inevitably get much better, but that will not in itself make anything better, or make their getting-better more likely. You could feel really great about yourself and your world on, let's say, insufficient empirical grounds—on story-telling grounds, or hero-worship grounds—even as a real disaster unfolds, for you or even for everyone.

To allow politics to take on the sort of symbolic weight it took on in the election just past is to allow yourself to be manipulated by waves of propaganda. One thing that has led to our current politics of fiction is that the consultants come out of "communications" programs, which teach that the way to manipulate people into agreeing with you is to "re-frame" an issue (a metaphor which already treats concrete issues as pictures). So the Supreme Court, let's say, gets re-framed by the Democrats, then re-re-framed by the Republicans, and so on, until finally the whole dissolves into hyper-generalized hooey with no utility beyond shaping public opinion.

And then, the politics is affecting people like a moving film: they cry, or they exult, but only with regard to images flickering on the screen, for most people absorb most of this via television and social media. And the differences become irreconcilable: each side is trying to sell a gigantic narrative story of America and our very selves, and these are entirely incompatible. It's not about the marginal tax rate, for example, but about what the marginal tax rate shows about who our opponents and we are deep inside, and what sort of world we supposedly live in, and what history we're living through. I don't think the actual people and events involved can plausibly sustain this level of fictionalization.

I'd suggest that we come back to concrete reality for a moment. This is going to be fairly easy as we watch Biden operate. As to whether Kamala Harris or anyone else is history on horseback: I suppose we'll find out.