Blowing in the Win 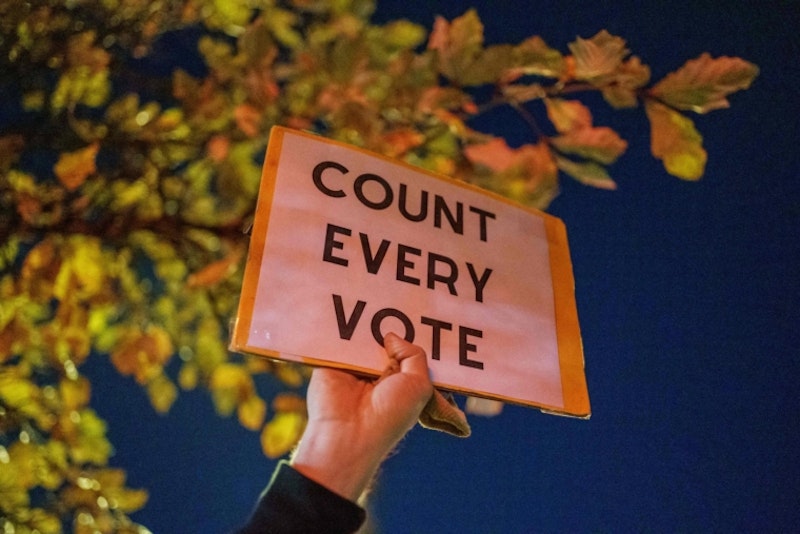 Wednesday, November 4, 2020, at the Baltimore City/County line, just before nightfall: 50 protesters, all older, all white. As cars zipped past on Northern Parkway and N. Charles St., these people held up small paper signs that read, with little variation, “COUNT ALL THE VOTES.” They were scattered all along the side of the road, waving the signs they made five minutes before they were out the door. One guy had an acoustic guitar, a very funny image that reminded me of the joke in the middle of Nashville where Barbara Harris’ character sings at an acoustic open-mic in the middle of a race car park.

Maybe he was singing for the people around him, but what were they there for? Were we counting the votes? Even if we were in Pennsylvania, and people that count votes actually were driving down that parkway at dusk Wednesday night, what were they going to do? Decide to count the votes harder? These are homework nags, study-hard psychos that build their entire lives around a life in academia that leads them into a prison where they’re happy to be the guards.

There were more protesters at an intersection across the street from Gilman School, and there were half a dozen people with similar signs standing in the exact same spot where I saw the Westboro Baptist Church protest a staging of The Laramie Project in 2009. I can’t remember whether Gilman or Roland Park Country School was putting on the play, but the WBC had their “GOD HATES FAGS” signs and they stayed all weekend. They had the same anemic energy and impotence as the “COUNT THE VOTES” protesters, but at least the Westboro Baptist Church was in the correct location!

I really don’t know what to make of affluent liberals waving signs that mean nothing at passing cars, the drivers of which won’t be able to read what their signs say unless they’re willing to cause a pile-up. This wasn’t an anti-war protest, it wasn’t a Black Lives Matter protest, it wasn’t an issue of the moment protest like the Terri Schiavo case in 2005. These people had the time and the energy to stand on the side of a goddamn highway off ramp and wave at cars like fast food mascots on a cold November night simply to show that they were righteous, that they were on the right side of this fight, a fight that none of us have any control over.

The election is done: whether Joe Biden wins within the week or it gets prolonged into a mirror image of Bush v. Gore, there’s nothing that the American voter can do. If you want to go protest and hit the streets, feel free—but all you can do is play one of two roles: “Cop” or “Protester.” Since the murder of George Floyd in Minneapolis in May, there have been hundreds of protests in nearly as many cities across the world, and absolutely nothing has been accomplished. That’s not the fault of protesters: as it was in 2014 and 2015, Black Lives Matter marches broadly have one goal: to make people realize how insane the police are in America and how badly they treat black people. There’s no central organization, the message is the name, and it ends there.

And what did people get? More POC CEO’s, more representation in corporate boardrooms, more races to choose from when playing a video game or watching a Marvel movie. Nothing has been done or even suggested by the Biden campaign about how to address police brutality and the regular murder and maiming of black people—and why should I expect that to change? Barack Obama didn’t give a shit about Black Lives Matter when he was president. He never even came to speak in Ferguson or Baltimore, a blight on his presidency equal to George W. Bush’s snubbing of New Orleans in the wake of Hurricane Katrina.

The votes are being counted, and the people I saw on Northern Parkway and N. Charles St. will soon be ready to go to sleep, relaxed and no longer anxious about the “fate of our republic.” Joe Biden and Kamala Harris will likely take the White House and be inaugurated in 75 days, once all the votes have been counted. It’s important that they’re counted, and without people as brave as those on Northern Parkway, well, I think it’s safe to say we’d be sliding into neo-fascism. That’s just tea. They did their part, just like the Westboro Baptist Church. They made their voices heard.