The Cautious Invisible Smiles of Victory

It's impossible to share the joy of Joe Biden being elected President when out shopping at Wal-Mart. 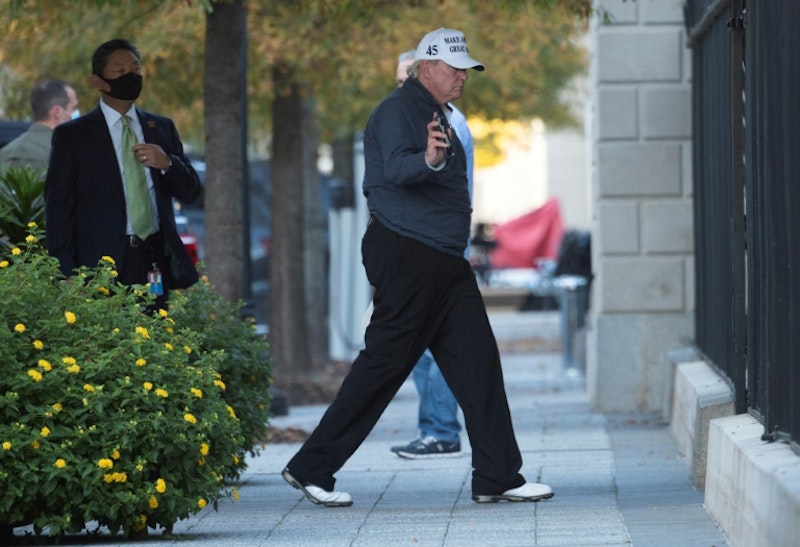 The Associated Press Biden announcement on Saturday, arriving around 11:30 a.m. Eastern, meant I was late in completing assorted self-assigned errands. The emotions and ecstatic joy flowed harder than anticipated, and—after texts and FaceTiming and likes and MSNBC gazing—it was time to get moving again.

The Walmart lot was jammed with autos and an obtrusive row of large, gray corrugated trailers. Their purpose was unclear; their presence lent the scene a disorientation. As I parked, an older gentleman wandered in my general direction, walking a very small dog. A cap was jammed on his head; a single tooth hung onto his upper jaw. This was the first human being I’d encountered, in person, since the news broke.

The stranger met my eye, or seemed to. “Did you hear that Joe Biden won?” he asked.

“YES!” I shouted, nodding in affirmation, feeling the exclamation jolt through my body for the first time, the sheer physical reality and relief of this fact. “Yes! He won, we won.”

The stranger shook his head, and said, ruefully, “You know he only won because the KKK made it happen, right? A lot of negros are gonna die now...”

I’d no idea how to respond to this.

I just mumbled something non-committal, moving towards the store entrance, hoping I’d remembered to lock the car as the stranger continued to address the space where I’d just been standing.

Inside, people were just wandering, queueing, berating their kids, everyone masked and impassive. It could’ve been any day. The self-checkout line was long, winding, and chaotic, and when it was clear that latecomers misunderstood it, I began a half-hearted effort to explain where it ended but then gave up when it became clear that the latecomers didn’t care.

The line could’ve doubled. No more lanes would’ve been opened. This has always been a particularly miserable, haphazard Walmart—I only go when the need to print photos physically arises—excessively cramped and crowded. Coronavirus magnified the pervading sense of claustrophobia.

It was impossible to share the presidential moment with anyone because expressions were impossible to read and, besides, how to anticipate anyone’s politics or interest? Anything could happen: a warm nod, a shrug, an epithet, a thrown fist, more bonkers conspiracy theorizing.

I rang up, paid, got the heck out of there.

I woke up early on Sunday, dressed, and hustled over to the 7-11 just off of 695. The tiny parking lot was tolerable for once. A short older woman and a tall, lanky younger man stood near the door, having a friendly, inconsequential conversation—their body language was Sunday relaxed, no sense or hurry—as I maneuvered around them. A young man paid for coffee and snacks as a young woman stood so close to him that they were almost a single entity. The day’s Washington Post and New York Times were in so I bought one of each, engaging in the usual transactional small talk with the clerk.

Outside, as I gained my car, a voice called out.

It was the short older woman I’d seen earlier, standing beside a medium-sized SUV. And now I noticed that with both hands she was holding a cup container jammed with two large coffees, plus a bunch of creams and sugars.

She needed someone to open her car, because her hands were full.

“Sure,” I said. I took the key and opened her driver-side door.

But then there was the question of where to place the coffee. I intuited that the rear driver’s side should be opened, and together we considered the next steps.

There was a bunch of stuff in that seat. The woman shook her head. “That’s my son’s. He works at the racetrack.”

The backseat was out. She climbed into the driver’s seat. “I have an idea,” I said, walking around the SUV.

I opened the passenger side front door, took the container, and gently placed it on the floor, then handed the women her keys.

“This should work,” I said. “You’ll just need to be careful driving home, and avoid any sudden turns or swerves.”

“Thank you so much!” she said. “I’m sure when you came here today you didn’t know you’d have to help someone like me.”

We waved goodbye, and she started her engine, pulled out; drove up the incline and out of the lot, a little faster than I would’ve liked.