Plague of the Clintonites

Advocacy groups posing as progressives like “Run for Something” are incompetent charlatans. 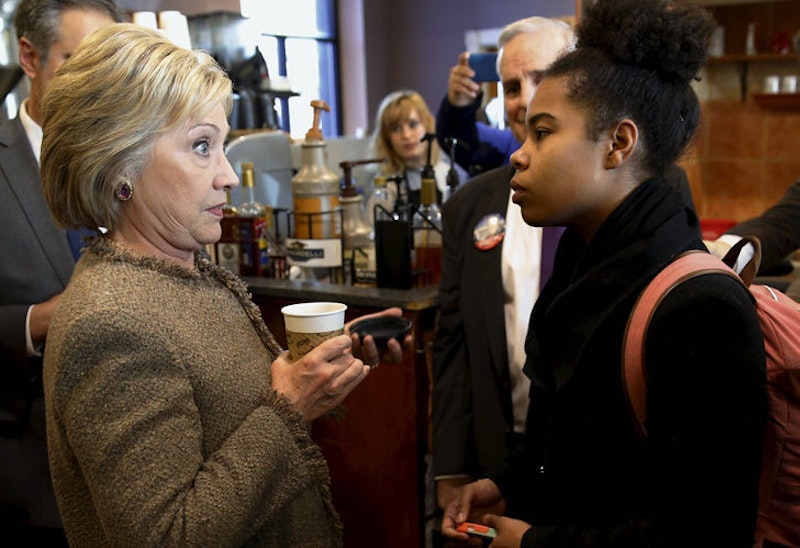 In the November issue of Harper’s, there’s a piece by Lisa Rab called “Star Search” about picking up the pieces of the Democratic Party after Hillary Clinton’s loss nearly a year ago. Rab profiles Amanda Litman, a woman who worked for Clinton’s campaign for two years and booked a vacation in Costa Rica after Donald Trump’s dismal performance in the first debate. She came to the Javits Center with “arms full of cheap beer for the campaign staff” on election night, and left hours later vomiting out of a cab. Trump’s win is still unfathomable, but I can only imagine what these people went through: not only the Millennials and Gen X-ers that sunk two years of their lives into an inexplicably inadequate campaign, but even more so the Baby Boomers and senior citizens that will never see a woman in the White House and came so close. It’s remarkable that none of them had full psychotic breaks like the Kony 2012 guy, slapping pavement naked and screaming gibberish.

Litman, 27, quickly gathered herself together and formed an advocacy group called “Run for Something” in early December 2016. They’re looking to fund candidates “who believe that climate change is man-made and want to reform the criminal justice system, protect voting and LGBT rights, and reduce income inequality,” in addition to other prerequisites: universal health care, gun control, immigration reform, and abortion rights. Another qualifier: “Litman wants at least half of the candidates to be women and people of color, to combat what she calls ‘a cyclical issue of old white dudes recommending other old white dudes.’”

Sounds like a welcome break from the old order. Unfortunately there’s a caveat: “Although [Litman] refers to state party officials as her ‘frenemies,’ Run for Something candidates are discouraged from criticizing the party and its leadership.” More loyalty tests and silencing insubordinates: a ticket going nowhere fast. Turns out Litman is a deluded Clintonite still blaming her candidate’s incompetence on “how much people hate women in charge.” Rab’s conversation with Litman in a Brooklyn coffee shop goes off the rails: Bernie Sanders people don’t trust her, she’s in denial about the irony of organizing local elections from a headquarters in Brooklyn, and she “speaks more often about [their candidates’] backgrounds than their ideas for the future.”

Rab writes that Litman’s “rationale for Run for Something is built on [the] idea that losing candidates eventually turn into winning candidates.” Spoken like a true Clintonite. More red flags: Litman refers to potential Run for Something candidates as pets: “If we teach the puppy to sit and behave, we can send them off into the world and they’ll be well-behaved puppies.” In other words, get ready for another seven years of Republican rule, whether it’s Trump or Mike Pence. Don’t count on the Mueller investigation to change the ticket in 2020. Progressives are high on California Sen. Kamala Harris at the moment, which would be amazing, but I doubt a black woman could beat an incumbent white man, whether it’s the current idiot in charge or his Skeletor-cosplaying Vice President.

Who knows—the same sentiment was expressed in early-2007 when Barack Obama entered the primaries. I also doubt the power and influence of the DSA, who are hobbled by their most popular media avatars: Chapo Trap House. Say what you will about Jeff Stein’s idiotic Vox piece, but it did underscore the DSA’s inflated sense of their own influence and their fatally insular attitudes. Chapo Trap House mobilized thousands of young people to join DSA chapters across the country after the election, but it’s a total Daily Show illusion: how welcoming is a room full of white people wearing Chapo t-shirts and yammering away about new Twitter squabbles and in-jokes?

Truly disenfranchised working class people—from transgendered sex workers to burned union dudes—aren’t going to jump into yet another exclusive club full of Occupy dregs, lifelong leftists and communists who want to abolish prisons and disarm the police immediately. The DNC is still saddled with a poisonous abundance of caution and illusions that Clinton was cheated out of the presidency, whether it was through Russian interference, the Electoral College, or angry whites who “hate women in power.” Please. Republicans would’ve voted for Sarah Palin if she were at the top of the ticket in 2008 regardless of her gender or her questionable intellect. That parenthetical “R” next to a person’s name goes a long way. The same can’t be said of Democrats or the left, who threw temper tantrums after Sanders’ concession in June 2016 and threatened to vote for Trump or Harambe.

Others suggest Joe Kennedy III, a 37-year-old Congressman, but I don’t see that working out either. Dynasties are out. Jeb Bush was dismissed and rejected by voters turned off by his pathetic impotence in the face of Trump’s new and exciting vulgar force of nature. Clinton faced the same grudges: like Mitt Romney before her, it was “her turn,” and that kind of glad-handing and hierarchical rewards system is so out of date, counterintuitive, and simply bad strategy.

It was Bernie Sanders’ year, and he would’ve won. But man, let’s move on. Despite my pessimism, I dig Kamala Harris, but if the DNC continues to hedge their bets, fixate on what went wrong in 2016, and bully and silence the emerging leftist contingent in our country, we’re doomed to perpetual Republican rule. There’s no solution for gerrymandering, they’re sinking money into losing campaigns and candidates, and the cult of personality is still infecting anyone with any kind of power, influence, or money. Maybe running a rosy-cheeked red-headed Kennedy is the left’s best chance. But ignore whatever the Clintonites are saying, because they’re born to lose and spiral further into denial and internecine conflicts.