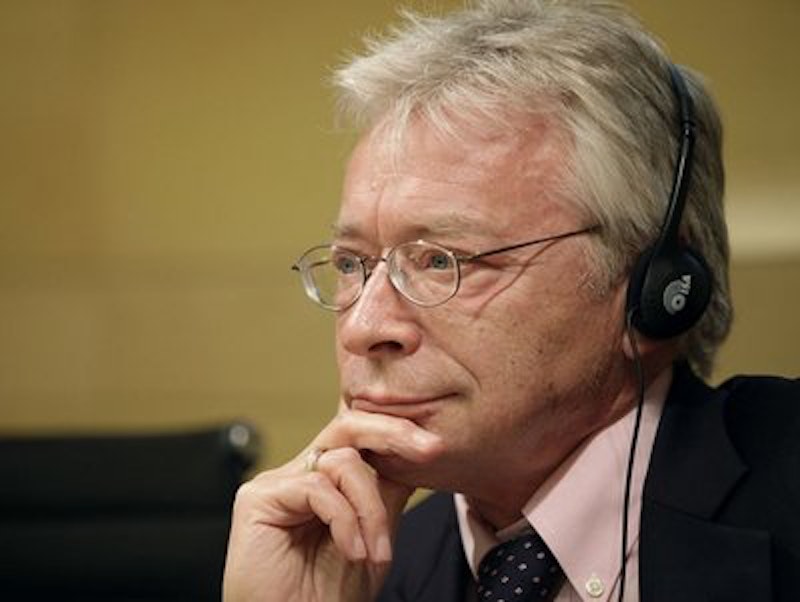 I assume it’s mere coincidence that the roof of the New York Federal Reserve caught on fire while libertarian philosopher Hans-Hermann Hoppe was speaking farther uptown on October 7.

He’s considered one of the most incendiary of libertarian writers, though, and has recently become the favorite libertarian of the alt-right, a group that seems to despise most libertarians. Hoppe, like the libertarian think tank hosting that night’s event, the Ludwig von Mises Institute, is sort of a mixed blessing for those of us who would like to see the world become libertarian. He’s a reminder that those who are radical enough to follow ideas to their logical, even disturbing conclusions aren’t always the best at public relations (see: atheism, etc.).

Long story short (and for a bit more detail, you’ll have to buy my book), though no two libertarians seem to agree on every detail of the philosophy, one formulation of it is arguably that government should be completely abolished, leaving only privately-enforced, property rights-based law. That is, you should never use anyone else’s body or property without their permission, not even to tax them in order to fund courts or cops.

I happen to agree and, like many “anarcho-capitalists,” I’m partly indebted to Hoppe for persuading me this view is not just morally correct but pragmatic and workable. Crucially, it was his long December 1998 essay “The Private Production of Defense” that convinced me running militaries through individual subscription payments would not only make militaries more efficient but far less likely to engage in expensive, immoral aggression. Go around attacking people and your premiums will go up. Ditto for police services, which should also be privatized (not that this is a blanket endorsement of everything ever done by a private force, just as believers in government presumably do not endorse everything ever done by government armies).

So the anarchists were right all along, starting back around 1800 or so, to see anarchism as the key to world peace. They just completely failed to understand laissez-faire economics. It’s secure property rights, including contracting for services, that make a governmentless world feasible.

So far so good, and if you weren’t willing to abolish government when you started reading this column (see: news from DC lately), I will assume you are by now.

But, alas, we libertarians have scandals much like the rest of the political spectrum, and Hoppe is responsible for a few. Basically, as most liberals reading this column are probably already thinking (with alarm), secure property rights mean the right of owners to exclude people from their property, and, yes, racists might want to exclude people who aren’t from their own ethnic group.

For a few decades, the mainstream libertarian response to that problem was mainly that there are numerous possible private remedies to racist institutions, including boycotts, the formation of rival firms by the excluded group, and simple reminders that excluding people costs you money in lost customers (or lost friends, if we’re simply talking about, say, party invitations). Constant reminders of how badly racism has worked at times in human history would obviously help, too. We can handle this without government, in short.

Contrarian Hoppe had to push things a bit farther, though—still quite within the confines of property-adherence and thus not, to my mind, getting the philosophy wrong—and start emphasizing, reasonably enough, that ethnic homogeneity isn’t always a bad thing. A “commonality of culture” can grease the wheels for neighbors and people engaged in common projects, as he argued in a September speech about the pros and cons of the alt-right.

Fair enough. I mean, few of us are comfortable with the government, say, forcing Chinese restaurants to hire non-Chinese people who might be less familiar with the relevant cuisine. Plenty of non-libertarians joined libertarians in expressing disappointment when the Libertarian Party presidential candidate Gary Johnson, striving to be anti-racist, said he thought the law should even force Jewish bakers to make cakes for Nazis (a horrific unintended consequence that caused him to backpedal later). Ethnic groups can transmit beneficial traditions, not just hate. Ask members of an orthodox religious community.

Under current affirmative action laws, keep in mind, you couldn’t start a firm staffed exclusively by hundreds of black people even if your explicit goal was to improve their lives and counter centuries of white supremacism. The law decrees that (for firms above a certain small size) every firm’s workforce must have the same ethnic proportions as the surrounding population, good business decision or not. You can actually be fined for giving too many poor black people jobs, and I hope you agree that’s insane.

And government, keep in mind, has hardly been an engine of tolerance and diversity for most of its history. Luckily, with Jim Crow laws receding into history and the market’s natural diversity churning ever faster since the Cold War ended, it looked like racism might be on the wane anyway.

But then—partly as a reaction against decades of campus leftism, I think—the alt-right came along and said, hey, maybe racism’s a good thing anyway. People’s brains are drawn to needlessly sharp dualisms: good or bad, food or poison. So now we’ve got this small but vocal cabal of almost-neo-Nazi activists walking around. (That description seems fair, though they get as angry as transgender people if you misuse their rapidly-multiplying, hairsplitting labels: white nationalist, ethno-communitarian, what have you.)

You see where this is headed, like a careening trolley car. Some of the alt-right noticed Hoppe’s emphasis on the right to “physically remove” people you don’t want on your property, and, well, the man who helped me believe in the possibility of world peace is suddenly the darling of far-right types who joke or fantasize (they’re deliberately ambiguous about it, like so many online trolls) about throwing leftists out of helicopters in the fashion of Chilean dictator Pinochet. Hoppe’s cartoonish German accent doesn’t make it any less unsettling. Pundit Michael Malice (whose book The New Right about the alt-right and related factions in the Trump era comes out in April) gave Hoppe a plastic toy helicopter at the Mises Institute event as a joke, and online arguments ensued over whether this was in poor taste.

Comedy is more complicated than philosophy. So is culture. Philosophical principles such as strict property rights adherence can remain eternally true and fairly straightforward despite people continually finding ways to misinterpret them, but the way people hear arguments on these topics shifts as a result of surrounding historical events—or contingent factors like the prevailing level of racial animosity.

The un-philosophical but perhaps PR-savvy response to Hoppe’s creepiest new fans, then, would be to reject not only them but everything Hoppe says and the think tank he rode in on, not to mention their underlying principles. I expect that reaction from the left. I’m saddened to see that reaction even from some libertarians (usually not the most principled or rational ones themselves, occasionally hailing from a rival faction or think tank).

A good philosophy student knows you should continue to pry apart the good and bad aspects of any argument even when the unsophisticated are shouting, “Ick! Stop talking about all of this stuff!” Pleasant and unpleasant implications may come bundled together, but we may be able to mitigate unwelcome side effects instead of choosing starkly between celebration and wholesale rejection. You don’t want to be like one of those people who rejects all of science once it gets a few studies wrong, or who denounces free speech because it empowers a few jerks along with the rest of the population.

Moderation, as has often been observed, is getting rare in online comment threads and political spats these days, but it’s still possible. For instance, people convinced Hoppe is dangerous and that therefore all property rights talk is just a smokescreen for bigotry might be surprised to learn what happened when some of these fights occurred, in slightly different form, 20 years ago—at a time when it all seemed an obscure academic footnote, since libertarians were growing more numerous in a decade of expanding global trade and accelerating technology, whereas no one was talking about joke-making online racists being a hip trend. The hardcore racists seemed doomed to inhabit trailer parks (possibly without Internet connections) and have extremely short haircuts back then.

In fact, around that time, a very short-lived alliance between some libertarians and the more Pat Buchanan-like paleoconservatives ended—in part because Hoppe condemned the paleocon writer Samuel Francis as a fascist, with Hoppe urging anarcho-capitalism as the alternative to Francis’s racism and statism. Anarcho-capitalism, despite its significant contrarian streak, need not rush to embrace the fringiest of allies and the most unsavory of permissible behaviors. Really. We can and should self-police, preferably without throwing out the baby of firm principles along with the bathwater of unsavory possible applications.

This brief overview won’t reassure everyone, I realize, but to some of my fellow libertarians who say we should just go the route of pretending that Hoppe and the Mises Institute can somehow be logically banished from the movement (as if it were a club instead of a set of principles) while advocates of regulations such as affirmative action are a-okay as allies, I conclude by reminding you that you probably don’t have a flawless public relations strategy yourself.

The Libertarian Party is usually considered a more mainstream, outreach-oriented project by the sorts of people who hate the Mises Institute. Yet I can’t help noticing the Libertarian Party’s candidate for mayor next week here in New York City is literally a schizophrenic former airline hijacker who wanted to go to Antarctica to fight the "Cabal" ruling the world. Perhaps that could be spun into a positive thing with joke slogans like “He'll stand up for places like Astoria, not Cabal-dominated Antarctica” or "Watch out, world: This time, New York City will be flying the terror-plane!"

Before any faction excommunicates people, in short, it probably ought to prove it is also capable of winning people over. No faction seems very interested in that these days.

I will, however, go see a debate in a few days between the slightly more moderate-libertarian editors of Reason and the leftist editors of Jacobin here in New York City. We’ll see if they manage to argue any more civilly than the rest of America.