Did Dunkin’ Donuts Really Call The Cops Because a Woman Spoke Somali?

The media says “yes,” but a quick fact check will tell you “no.” 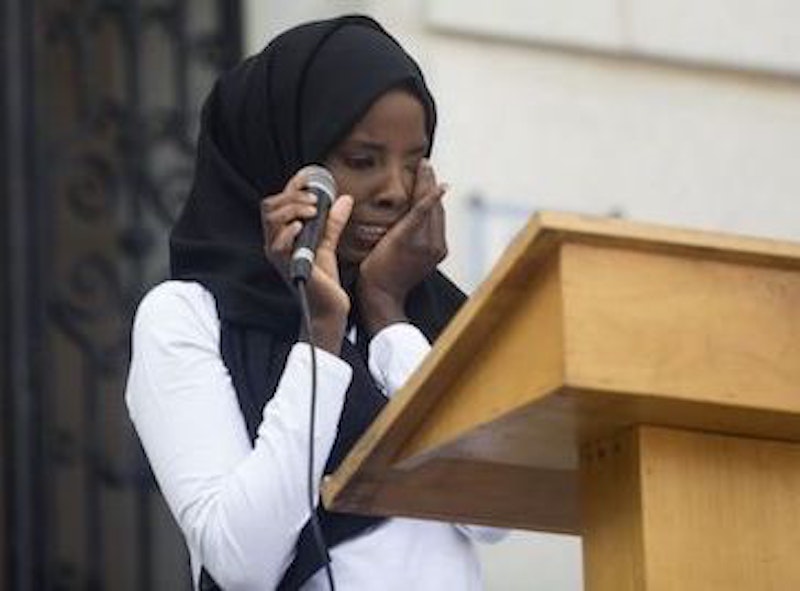 Last week, the media reported that a Dunkin’ Donuts employee called the police on a Somali refugee and left wing-activist named Hamdia Ahmed because she was speaking Somali with her family in her car while trying to get their order together at a drive-thru in Portland, Maine. The New York Post headline is typical of the media’s characterization of the incident: “Dunkin’ Donuts worker calls cops on Somali model for speaking in native language.” Google it and you’ll see headline after headline with the same message. Most people who’ve read about this (most just read the headlines) just accept that the police showed up because people were speaking a foreign language while deciding what donuts to order. That’s the kind of country the U.S. has become under Donald Trump.

On Ahmed’s recording, the employee can be heard saying that the problem had nothing to do with her customer speaking a foreign language. A police officer was quoted as saying that the problem might’ve been caused by the way sound gets transmitted to the headsets—it can sound very loud. It’s possible that the employee mistakenly thought Ahmed was yelling at her. Here’s what Ahmed reported the employee said to her: “Stop yelling. You’re yelling in my ear. I’m calling the police. I’m not taking your order.” None of the articles I’ve read stated that the employee could see Ahmed’s face, so there’s no way of knowing whether racism was even a factor.

For some reason, Ahmed hasn’t posted a recording of what occurred when she went inside the building to confront her tormentor, although it’s hard to believe she wasn’t recording then. The police issued Ahmed a no-trespassing order for one year because she was allegedly abusive to employees. Subsequently, after the incident had gone viral, the owner of the store apologized to Ahmed, and told her she was welcome back any time. That probably came after a talk with corporate headquarters.

Most of the media accounts of this incident neglected to report that, just weeks ago, Ahmed was involved in a similar imbroglio at a Starbucks. She said the barista rolled her eyes after she requested information on possible alcohol content in the vanilla used in a coffee drink. Ahmed—the first contestant ever to compete in a Miss Maine contest wearing a hijab and a burkini—called the reaction “Islamophobic.” She initially posted a video of the conversation, but it’s been taken down for some reason. Starbucks apologized, of course, but there’s a decent chance that Ahmed targeted the firm.

There have been a number of disturbing incidents in recent months involving white people calling the police on black people for no seemingly valid reason. The media, which is eager to report these stories because they’re sensational, is presenting this one as just the latest example of American Xenophobia and racism in the Trump era. The same goes for the reporting on the story of a woman who’s now been dubbed “Apartment Patty” after a video of her preventing her black neighbor from entering the front door of their apartment building went viral. You can’t help but wonder, after seeing how these matters unfold so many times before, how this woman, who knew she was being filmed, couldn’t realize she was in the process of destroying her life and reputation with her impromptu vigilantism that accomplished nothing. Sure enough, Hilary Brooke Muellerwas fired from her job within a day.

While there’s no evidence Mueller’s actions were race-related, it looks bad on video, which is all that counts in the court of public opinion. Mueller, who has a black husband, said she was just following the condo board’s directive that residents shouldn’t allow anyone they don’t know into the building. She’d cracked the front door open, allowing the individual in question to enter without his key fob. If that’s the case, then the condo board ought to re-think its approach to involving residents in security matters. It’s too late for Apartment Patty—she’s already been tried and convicted all over the Internet.

The reporting shoddiness in both of these events isn’t shocking any more. Those who call the cops on black people when they wouldn’t do it to whites are racists who should be condemned, but in the current environment the media just assumes immediately that one person’s an ill-intentioned perpetrator and writes a story to fit that narrative. The media’s forgotten, as much of the public has, that one of its primary duties is to be skeptical rather than jumping on bandwagons.

After her incident, Hamdia Ahmed said, “I hope I started a conversation about why the police are called on black people for no reason,” but the media haven’t presented the case in that way. The Dunkin’ Donuts employee has her photo all over the Internet now, even though she wasn’t given the chance to speak up. There’s a good chance that Ahmed’s an activist who’s aggressively seeking to manufacture events to raise her profile. If that’s the case, the media will never report it.