The prescience of a 1969 junior high student in Huntington, NY. (Definitely not me.) 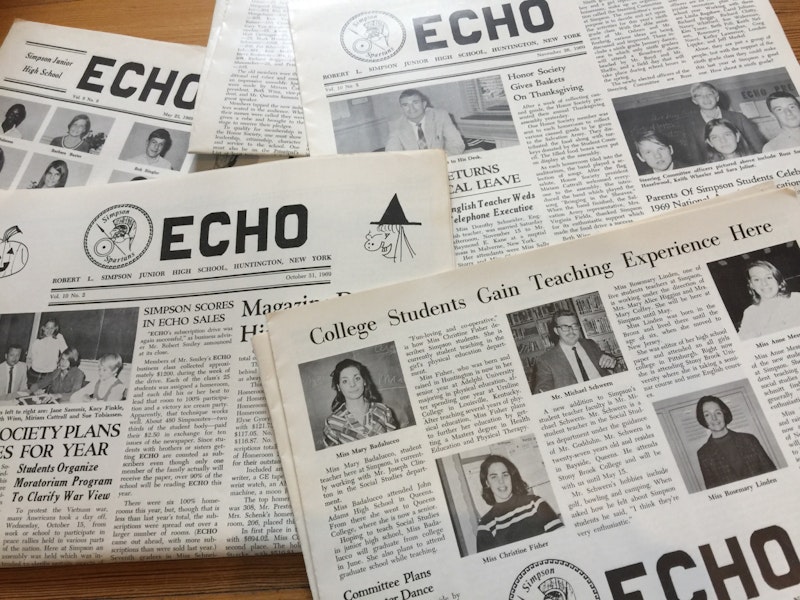 Last Sunday, I was changing a lightbulb in our basement, and, as happens frequently after performing such chores, I had an itch to open a trunk that contains reams of artifacts from pre-college days. On top was a short stack of the Simpson Junior High School newspaper—Echo—that I worked on in ninth grade in Huntington, New York, during the 1969-70 school year.

It wasn’t much of a paper—though certainly no worse, I suspect, of similar periodicals published at public schools during that era—though the journalism class, taught by the amiable Eleanor Carrizzo, was a lot of fun, mainly because of my friends (Elena Seibert, Timmy Greene, Bob Ringler, Mark Stilwell, Rich Hoblock and Howie Nadjari, among others) and the small amount of work assigned. The paper was a monthly, printed on heavy stock, and filled with the typical administration-driven “news,” a gossip column, “Mum’s the Word,” that made little sense except to those in the class, and a few stabs at current events. Nevertheless, contained in the October 31, 1969 issue was an album review of Abbey Road—I thought it was tops, but not on the level of Sgt. Pepper—and that was my first byline of a long career in journalism.

Eyebrows were raised by Mrs. Carrizzo and classmates when my co-author, Ricky Morrison—we each reviewed a record in this “Mixed Bag” column—struck a deal with a local record store, Johannessen’s, in which the owner received a tag at the end and Ricky and I got to keep the records. It took about an hour to convince the fellow, presumably Mr. Johannessen, to sign on, especially since we said there was no guarantee of positive reviews, but our joint schmoozing worked. We probably should’ve worked on the business staff. I’ve no idea where Ricky is these days, but he was a smart and popular kid, and we hung out a lot playing records, getting up a game of touch football and going to Crescent Beach with other cohorts.

In that same issue, Tom Demske (another great guy whose intelligence was off the charts, although waylaid by bad grades it wasn’t until several years later that he jumped from Suffolk Community College to Yale) wrote the most prescient article I saw in a cursory look at several issues. Tom agued that cable TV was knocking on the future’s door—this was 1969, remember, a long time before it became ubiquitous—and put forth a compelling argument for a service that I’m sure no one else in the class had even heard of. It was news to me, at least.

He wrote: “In the future, cable-TV could be used as a burglar alarm, a fire alarm, a babysitter, and a way to communicate with friends. These, and more, could all be accomplished though closed circuits on the pay-TV system… In principle, pay-TV is not unlike a newspaper. People pay to read the news and features, and people pay to see and hear the news and a wide selection of programs and features.”

Not the most sophisticated prose—Tom, like me, was 14—but man, he had it nailed: forget the burglar alarm (though I suppose that’s a feature of some home entertainment systems today) and think about his idea that friends could communicate with each other via cable. That’s a flat-out prediction of social media in the late-1960s, and though he’d probably modestly shrug it off today, it sure beat the bilge in the rest of the issue: stories about the Honor Society, a magazine drive, a new library club, and the return of a teacher to the social studies staff.

This isn’t a knock on the other students—it was standard Junior High School newspaper fare, no doubt assigned by the teacher, and nothing of mine I looked at was very impressive, save a review of the latest Byrds record—but rather a nod to Demske, undoubtedly the most curious, I-got-a-head-full-of-ideas fellow I’d met at that point in my life. And a smooth operator: a pot-smoking friend I’d hang out with, along with other fondly-remembered characters, who was hilarious, caustic, and able to cut a dumbo football star down to size with a simple wisecrack.

At Huntington High School, I opted out of participating in the official school paper—I can’t even remember if there was one—and wrote instead for the irregularly-published Crux, a mimeo job that was interesting more for the passion exhibited by students on current events than the writing itself. It was what you did in the early-70s if hoping to become a journalist.

As a freshman at Johns Hopkins in 1973, for reasons I don’t remember or fathom, I didn’t immediately join The News-Letter, unlike pals Alan Hirsch and Marc Duvoisin. But I did have one story published that September, a review of the Stones’ lackluster Goats Head Soup—sophomore Mark Borsi shepherded its acceptance—that was mostly about the song “Angie,” which I really liked, and still do.

It was the only article I’ve ever had published under the byline “Russell Smith,” and it wasn’t my choice. Nonetheless, I kept a folded-up clipping of the piece in my wallet, and would look at it in succeeding years. That is, until my wallet was lifted in 1986 at the City Paper office in Charles Village: we had a coat rack in the foyer, and stupidly, I left the wallet, which also contained $500 and a credit card, in my suit jacket pocket, and someone swiped it. An inside job, absolutely, and it still ticks me off.