Elena Kagan and the Limits of Executive Power

Trust the establishment, trust the long game—hope that the other team doesn’t win anytime soon. 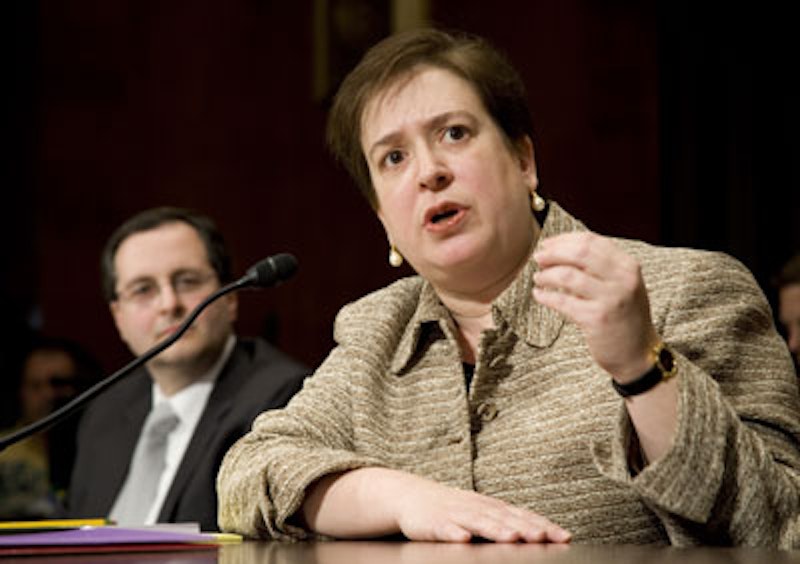 President Obama surprised few when he nominated his Solicitor General, Elena Kagan, for the Supreme Court on Monday.
The debates orbiting around her are notable not for knee-jerk Republican obstinacy—as with the absurd charges that Sonia Sotomayor wasn’t qualified for the Bench—but for the serious clanging of camponili from the Left, relentlessly led by Glenn Greenwald. The objections are numerous (for those wanting to wade into the substantive end of the SCOTUS pool I’d suggest starting here) but I’d like to focus on perhaps the most important: her defense of executive power, particularly as it relates to both protecting Americans at home and going after terrorists abroad.

As the President’s Solicitor General, Kagan’s job description has her presenting and/or defending the administration’s position in any given Supreme Court case. It’s not pernicious to assume she was hired because she’d be an apt defender of Democratic legal thought—indeed, From 1995 to 1999, Kagan served as President Bill Clinton's Associate White House Counsel and Deputy Assistant to the President for Domestic Policy and Deputy Director of the Domestic Policy Council. She’s an insider’s insider, hired by National Economic Council Director Larry Summers as Harvard’s first female dean of the Law School in 2003.

But, importantly, she has no judicial record. What we do have is her scholarly, written, substantial enough for critics to charge that she’s soft on unitary executive power—that is, the governmental mechanism for such things as torture, warrantless wiretapping and indefinite detention of enemy combatants.

Obama has not put a lot of daylight between himself and his predecessor in terms of bringing more transparency and accountability to the executive branch’s military and intelligence capabilities. The country’s immoral and malevolently hypocritical use of torture remains largely unaccounted for; Miranda is in question each time a would-be or dumb-ass terrorist is captured; drone strikes in Pakistan and Afghanistan kill civilians with frightening, if slightly decreasing, regularity.

With asymmetric warfare replacing trenches and tanks, I accept a reality wherein America’s military and intelligence forces must be deployed in a manner not entirely consistent with Constitutional and legal precedents. The same piece of parchment that codified free speech and freedom of religion and checks and balances also decreed African Americans to be worth three-fifths as much a white citizen. As a liberal and a realist I believe the Constitution to be an evolving document.

President George W. Bush systematically overreached when it came to executive power; his vice president is quite comfortable talking about the Bush administration’s war crimes on television (and generally committed to turning himself into a pathetic caricature of an unpatriotic demagogue). While Obama has taken serious steps shore up America’s international reputation, the legal and Constitutional matters of privacy, the detention of enemy combatants and asymmetric warfare will define legal thought in this century.

Kagan critics allege she will simply continue the Court’s recent, pseudo-neoconservative approach to executive power.
The Obama presidency, a year and a half in, has proven to be transformational, if not in each and every way both the candidate and his followers imagined during the campaign. The financial crisis, health care and the wars in Iraq and Afghanistan ranked as some of the biggest crosses for the American public to bear. With Bush, leadership on these issues was delayed, obstinate, partisan or simply neglectful. The Obama administration has proven it is willing to take on colossal legislative issues in order to address the very real and enduring obstacles to recovery. Bipartisanship is a myth I’m happy politicians continue to, at the very least, allude to now and again—but with the Republican Party comfortable in a vacuum of epistemic closure and proud ignorance (cries of “socialism” and “government takeover” and “making Americans less safe” ring from Tea Parties to meetings at Rayburn) it’s impossible to see much of anything resembling reasonable opposition from the Right anytime soon.

On the domestic level, Obama is doing the kind of work I hoped he would; we have a leader who remains calm and yet constantly on the move, pivoting as smoothly as any professional politician, but backing it up with action that is, for the most part, thoughtful and decisive. One of his first actions as president was to sign the Lily Ledbetter Fair Pay Act, a necessary legislative corrective to a terrible SCOTUS decision; though still too slow for some (including myself), Obama has put the wheels in motion to finally stop the government-sanctioned bigotry of Don’t Ask, Don’t Tell; his selection of Sotomayor to the Bench reminded the public of his preference for a judge with “empathy” for everyday people and their struggles; the stimulus and heath care reform bills were painful, necessary and historic.

As of this moment Obama’s chances of reelection are relatively comfortable (even if unemployment stays around nine percent, a charlatan like Sarah Palin, Mitt Romney or Tim Pawlenty as the Republican nominee would either deliver 40 states to Obama or trigger a third party run—or both). Obama is at his most effective when he’s strategizing in the long term. But there are only so many paradigms one president can nudge at a time, let alone transform.

Kagan’s selection appears to me as emblematic of the Obama administration as either passing the buck on or embracing the Bush approach to executive power. Even though Obama has committed to repealing DADT, he’s using the mechanisms that exist, lining up current and former top brass and above all being patient. As is readily apparent in the Right’s hysterical conniptions over something as basic as Mirandizing a US citizen, Arizona’s immigration bill and the even-more rabid gun crowd, America’s view of itself as a place that is once free and in need of serious protections and guidelines is an extremely difficult one to process. It’s painful to watch. Add to that the necessities intrinsic to asymmetric counter-terrorism and you start to have an idea of how utterly opaque the delineations between the political, the legal and the practical. This is the climate to which Supreme Court Justices must be acclimated.

Greenwald et al argue that Obama is asking his supporters to blindly trust him in picking someone who won’t turn out to be a Justice Souter for the Left. His charges are valid, but at the same time the political and governmental system as such demands some level of such a blind trust. We’re not all legal scholars; the Constitutional framework for preventing terrorism is stitched together on the fly. Supreme Court appointments are for keeps. The confirmation process is purely back room arm-twisting and public finger-wagging. If the phrase “elections have consequences” means anything anymore it’s the simple rule that a president from your party is going to nominate judges you want to see on the bench—your team wins. Matthew Yglesias repeatedly makes the argument for turning a SCOTUS for-life appointment into an appointment with terms and term limits and possibly age requirements (I’m less enthusiastic about that last point), and I would like to eagerly hop on board that bandwagon, such as it is.

It will take a different kind of transformational leader to effect the kind of institutional change—on the executive and military/intelligence level—Greenwald and I would prefer happen now. Obama’s background and his immense talents lend themselves perfectly to targeting, attacking and fixing the great domestic issues of our time. With foreign policy, he’s accepted some of Bush’s furniture while burning the rest, taking real steps to repair America’s image abroad. But in the legal sphere—where both domestic and foreign policy, civil liberties and executive authority collide—Obama is ensuring that he and his successors will be able to continue asymmetric warfare with the Supreme Court’s blessing. In Bush’s hands that meant illegal wiretapping and needless, wanton torture. But, as Greenwald continues to hammer home, we trust Obama—just as conservatives trusted Bush. What’s the difference, ultimately?

As noted above, some blind trust is unfortunately and inevitably necessary. My trust in Obama lies in my belief that he and his administration have the foresight to see past the next news cycle and the abilities to finally bring a liberal breath of fresh air to the stagnant inefficiencies of conservative public policy.

To indulge in the hypothetical, a president with significant, unimpeachable military experience as well as, say, a term or two as a governor or senator (the latter more likely, I think), with the same cerebral qualities Obama has shown, would be in a much better position to confront the legal quagmire of terrorism, indefinite detention, etc. This is not to buy into the outdated fable of “conservatives are good on foreign policy, liberals are not.” My hypothetical president would probably be as center right as Obama is center left but, political spectrums aside, he would possess the same long-view of government and reform, the same abiding respect for our institutions and their elected officials. My hypothetical president couldn’t pass Obama’s stimulus or health care bills—legislation that reflects Obama’s experience with the American condition as it relates to the poor and the wealthy, liberal and conservative. Perhaps my hypotherical president needs to have some breathing room—that is, a stable economy, low unemployment, fewer casualties in Afghanistan and/or a cooperative Pakistan. This country's greatness continues to be defined by its immense capacities for change and innovation; perhaps it is needlessly fatalist to believe the current slate of problems to be too much for any administration to handle.

Kagan may very well prove to be something of an albatross around the Obama administration, both in real time and in the textbooks, as she represents the Executive Branch far outpacing the courts, Congress and public opinion when it comes to dealing with terrorism, domestic and abroad. As Obama works to make sense of America’s trajectory as the once-great-now-hampered world power by keeping Congress in the loop and talking directly to the American people, he’s nominating Supreme Court justices who will give his and subsequent administrations the legal elbow room for torture and warrantless wiretapping.

The Obama administration may not be trafficking with those policies, but I certainly am not comfortable seeing this legal gray area passed on to a future president with less nuance and sense of purpose than Obama.