With the print media world going under, criticism and reform are desperately needed. Sometimes, though, the pundits go too far. 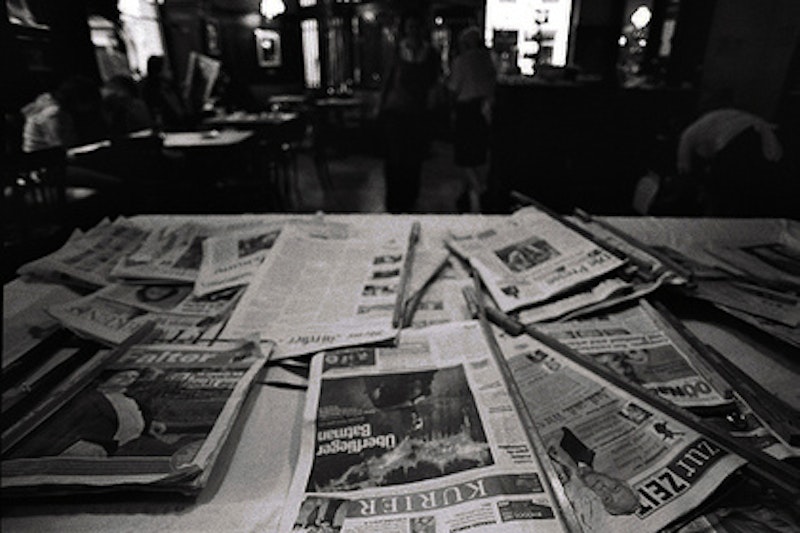 A pillar of print media fails.

Out of Town News, the longstanding news shop right in the middle of Harvard Square, is closing. And I think that’s, well, kind of sad. What else are they going to stick there? But, seriously, count this as another bad sign of the times. And speaking of the Times—The New York Times—the Web’s self-proclaimed Guru, Jeff Jarvis, relishes in pointing out that the NYT is worth less than the NYT-purchased Boston Globe.

In a recent column on Slate, Ron Rosenbaum takes issue with new media mogul/guru/pain in the ass Jeff Jarvis “gloating too much about the death of print.” If you don’t follow the incestuous circles of “media” “criticism,” Jarvis sort of styles himself as a guru of gurus—“He's now visibly running for New Media Pontificator in Chief,” Rosenbaum wrote.

Rosenbaum unpacks Jarvis’ general argument that the journalists themselves are to blame for their industry’s demise. They didn’t train enough, weren’t prescient enough, weren’t … Jarvis enough.

Read the Rosenbaum column for a full counter-argument. My nitpick with Jarvis is how utterly unwilling he is in thinking of media and print as the same beast—that if one part dies the other is going to suffer. He seems happy to ignore the print-begats-online-begats-print cycle—that the two drive each other. But it's not a chicken or the egg thing—obviously print media came first, but print is the half of media so depserately in need of change. Ultimately, though, the highly trained journalists and the mountains of content they produce are the reason there are so many good blogs. The Huffington Post and Talking Points Memo don't have Baghdad bureaus.

Not directly related, but Nate Silver of FiveThirtyEight came out of the election season as the best poll analyst in the game—and he did it using other peoples’ data. The Web is at its best when its firing on cylinders—that is, using all the tools available.

Jarvis certainly has some timely things to say, but he could stand to broaden his views print just a tiny bit.