A tip led Splice Today to the cover and editor’s note of Time’s most popular issue of the year. 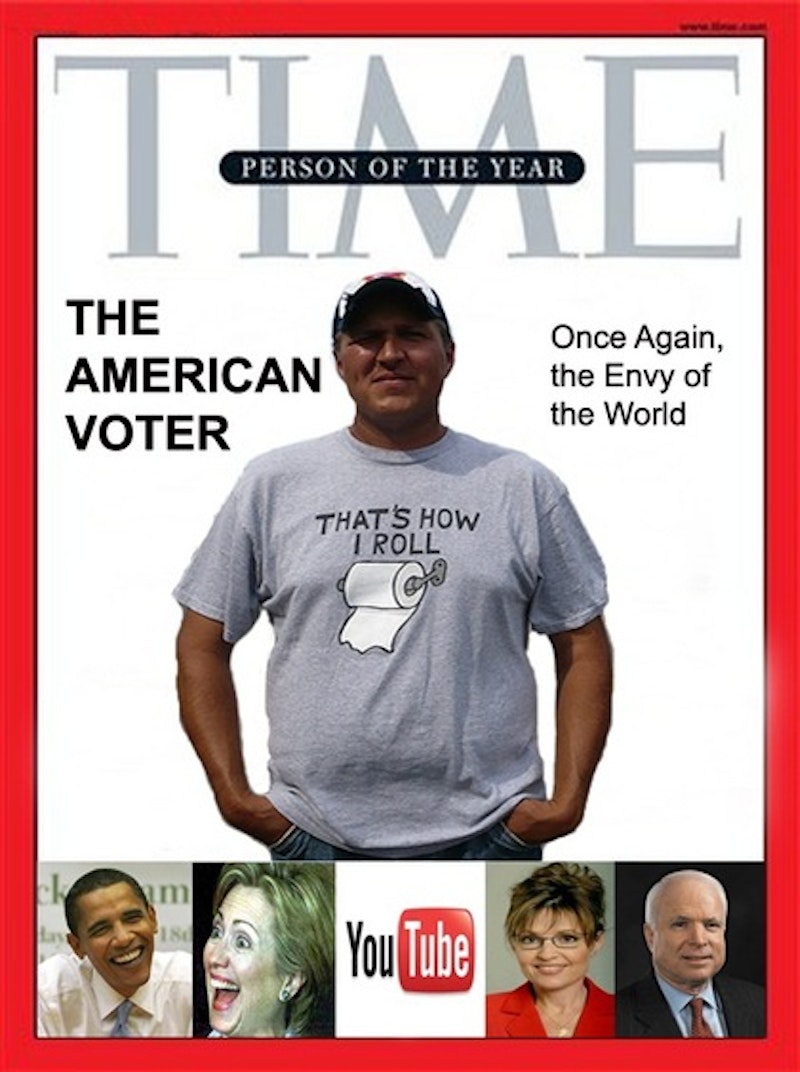 Over the weekend a Time magazine columnist, perhaps disconsolate over the diminished influence of this country’s most storied newsweekly, emailed us an advance copy of managing editor Richard Stengel’s introduction to this year’s choice for “Person of the Year,” as well as a “working” mock-up of the cover, above. What follows is Stengel’s vigorous explanation of a surprising pick.

Time’s Person of the Year: The American Voter

In a year when the nation’s financial institutions melted down in a dramatic confluence of events not seen since the Great Depression; a lame-duck President was rendered impotent by nearly daily crises tumbling down on his Oval Office desk; unemployment and economic inequality reaching new, and powerfully disturbing levels; violence continuing in both Iraq and Afghanistan, with no end in sight; and the election of a charismatic young African-American Senator as President, a man whose personal narrative inspired millions upon millions of people, not only in the United States but all over the world, capturing the zeitgeist of the political and popular culture and re-defining the phrase “game-changer,” there was a sweeping development that trumped everything else.

It bears repeating that TIME’s Person of the Year is not and has never been an honor. It is not an endorsement. It is not a popularity contest. At its best, it is a clear-eyed recognition of the world as it is and of the most powerful forces shaping that world—for better or worse. As aficionados of this special issue of TIME understand, past recipients have included Adolf Hitler, Joseph Stalin, William Westmoreland, Richard Nixon, Ayatollah Khomeini, Newt Gingrich and Ted Turner, as well as Winston Churchill, FDR, Bill Clinton and Mahatma Gandhi. Happily, this year’s choice—The American Voter—is one of the most positive and affirmative picks in recent memory.

Readers may rightfully ask, “Why not Barack Obama?” and we pondered this very question over many long conferences and sleepless nights. While it’s true that President-elect Obama—with his breathtaking rhetoric, nearly flawless campaign, multi-faceted personal narrative and decisive victory on Nov. 4—would have been the obvious choice, in fact, it was his very ascension to leader of the free world that dictated we recognize The American Voter as “Person of the Year,” for without the glorious enthusiasm and participation in the quadrennial electoral marathon by ordinary citizens from coast to coast the new President might now be preparing his return to the Senate.

Yes, the United States is once again the envy of the world. In what other country, one might reasonably ask, could an election to replace an extraordinarily unpopular President be conducted without violence or even a coup d’etat? It is testimony to the intrinsic sense of right and wrong of our countrymen that we don’t resort to such measures in the United States.

And consider the riveting, and quintessentially American drama that has unfolded during the past two years. An African-American, not of the manor born, was victorious in his pursuit of every child’s dream, but also Hillary Clinton spoke truth to power in a way that emboldened not only the first wave of feminists but young women as well. John McCain, whose own personal narrative is etched into the mind of so many grateful Americans for his valiant military service, conducted a valiant campaign that, while at times somewhat dark, connected with senior citizens and all those who revered his bucking of Washington, D.C.’s “insider” cabal of lobbyists, consultants and financial contributors-for-hire in a way that won’t soon be forgotten. Let’s also take note of Senator Joseph Lieberman, a true maverick in his voyage from Al Gore’s running mate in 2000 to defying his own party’s leaders, without fear of reprisal, who endorsed the GOP’s McCain; it was a profile in courage that won’t soon be forgotten. And Alaska’s Governor Sarah Palin electrified a segment of the country’s electorate with her no-nonsense, plain-spoken embrace of Wal-Mart and hockey moms.

The year 2008 will go down in history as yet another example of America’s unique form of participatory democracy, exemplified by the vast influence on the election by the Internet, its bloggers and citizen journalists and the by-now ubiquitous YouTube. Politics in the United States had reached a fork in the road, and thanks to you, the American Voter, the correct direction was taken and we are much, much richer for it.