Republicans need to embrace the same netroots base-building that the left has mastered. 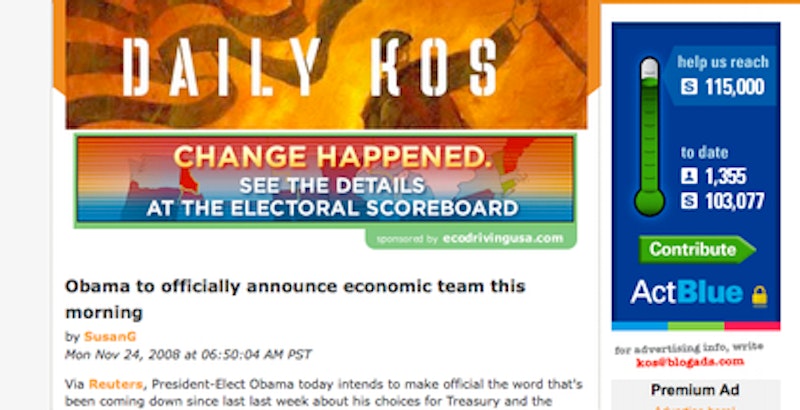 Take a look at Salon's new section, Open Salon. It's another free for all, (a "social content site"), of sorts, for unprofessional commentariat of all stripes. Much in the same way The Huffington Post cemented the importance of crowd-sourced (anyone can write) journalism and punditry with its successful initiative Off the Bus, Open Salon and other like-minded ventures are banking on the stabilizing power of devoted, unpaid contributors. These collaborative ventures—de facto think tanks—can sometimes offer a barometric reading of a political demographic.

Crowd-sourced think tanks are enjoying heady times. President-elect Barack Obama’s multimedia campaign brought a slew of young, educated people into the blogosphere, and the election season itself bristled with commentary and analysis from every possible source. (Yes, plenty of it was garbage, but you take the lumps with the good. Major blogs, such as Andrew Sullivan's The Daily Dish and Talking Points Memo, logged millions of page views through the campaign season. Those numbers will drop down somewhat, of course, but the two-year slog of an election cycle dragged the general public's attention more firmly into the blogosphere and beyond. Their eyes are, more than ever, wide open to group blogs, social-networking platforms, RSS feeds, and the like.)

Fiercely partisan (too much for this liberal to handle, sometimes) site DailyKos is one of the more complete success stories of the Internet's current state. Indeed, the site has been the progressive netroots' flagship for years now, hosting the annual conference Netroots Nation. Anyone can sign up and maintain a diary on Kos, and members recommend better posts up to the front page. Markos Moulitsas, the site's founder, is as widely linked a political writer as they come. It's a fierce community that embodies the "angry Left" stereotype as well as serves as an ever-dependable punching bag for right-wing pundits.

But the site is not simply about blogging and commenting from afar. It is a political fundraising machine, pouring money into campaigns big and small, local and national. The site's base is so devout that when Moulitsas gives the word (with plenty of reminders), sometimes thousands to tens of thousands of dollars pour into whichever progressive campaign needs it most. This can seem like chump change, but an overnight boost of five, six, 10 thousand dollars for a state rep or House campaign can make a crucial difference. And it has.

When Minnesota Republican Rep. Michelle Bachmann ran with the Gov. Sarah Palin-inspired meme of real-vs.-unreal America, her opponent woke up the next morning with close to half a million dollars in donations and another million from the Democratic Congressional Campaign Committee. DailyKos was not entirely responsible, but that sort of rapid response is a hallmark of the site: When Republicans grossly overstep the lines of decency, there's hell to pay. (Unfortunately, Bachmann kept her seat; score one for unbridled ignorance.) Obviously Republican America's grassroots is not without its deep pockets. The Mormon Church pumped around $17 million into California in a successful attempt to ban gay marriage and propagate its bigoted views. Evangelical radio and megachurches routinely drum up huge sums of cash, usually employing the same type of race-, gender- and class-baiting employed by Palin and her ilk. And let's not forget the Republican Party is home to big, big business. But the party is now far behind the Democrats in Internet grassroots organizing and fundraising; it doesn't have a lighting rod—both politically and ideologically—like Kos.

The term "circular firing squad," describing the current state of the Republican Party, is the meme of late fall, and everyone from the big cable networks to The New York Times is writing about it. The election of Obama was a refutation of the politics of the past eight years—from which Sen. John McCain and Gov. Palin could not possibly extricate themselves—as well as a crossroads for the Republican Party. Standing athwart that crossroads is Sarah Palin. At The National Review, the schism couldn't be clearer: support (or lack thereof) for Palin was the line drawn in the sand. Some of the publication's best-known names, David Frum and Christopher Buckley, left because of the clash. Light polling more than suggests the Alaska governor is fresh in the minds of the Republican base. For the growing number of conservative pundits who refuted Palin and her divisive politics, these numbers are not good.

All this infighting is indicative of a tension between what it is to be Republican and what it is to be conservative: party vs. ideology, falling in line vs. speaking out. Religion is the engine of this tension, as the Christian bloc in the Far Right keeps the party's politics mired in such issues as abortion, school prayer, gay marriage and the deviously effective red herring of "patriotism." President George Bush has taken significant flak from his own party for blowing up the national debt, overseeing a massive expansion of government and enhancing a prescription drug benefit for the elderly—not exactly part of the traditional conservative agenda.

A good number of those dissenting voices are what make up the vanguard of conservatism's intellectual voice. They are the ones who saw the Palin pick as gross electioneering, sexist and a disaster waiting to happen (which did happen), who sharply criticized McCain and endorsed Obama. The Atlantic has some of the most prolific of these voices in its stable: Marc Ambinder, Ross Douthat and Andrew Sullivan. Culture 11 is a new conservative (more right-leaning than the Atlantic writers) group-content site that offers sober and level-headed commentary. David Frum, who wrote columns for National Review for six years, is launching his own group blog.

A recent editorial from The Economist puts the Republican Party's concerns in stark detail:

There are any number of reasons for the Republican Party’s defeat on November 4th. But high on the list is the fact that the party lost the battle for brains. Barack Obama won college graduates by two points, a group that George Bush won by six points four years ago. He won voters with postgraduate degrees by 18 points. And he won voters with a household income of more than $200,000—many of whom will get thumped by his tax increases—by six points. John McCain did best among uneducated voters in Appalachia and the South.

For this liberal, the hope for the Republican Party is that these editors, columnists and bloggers will predicate a conservative grassroots movement removed from the Christian arm of the Party—a base as responsive, both intellectually and politically, as the Daily Koses and Culture 11s of the Web. Hope for the Republican Party resides in its ability to come to terms with its warring factions, to become once more a party of ideas.

From the same Economist piece:

Republicanism’s anti-intellectual turn is devastating for its future. The party’s electoral success from 1980 onwards was driven by its ability to link brains with brawn. The conservative intelligentsia not only helped to craft a message that resonated with working-class Democrats, a message that emphasized entrepreneurialism, law and order, and American pride. It also provided the party with a sweeping policy agenda. The party’s loss of brains leaves it rudderless, without a compelling agenda.

Barack Obama is a man of ideas. He steadfastly rejected Clinton triangulation and caused a major dust-up from his own party when he praised Ronald Reagan; he garnered endorsements from across the political spectrum. No doubt his administration's agenda will be a progressive one—best evidenced in the selection of Rep. Rahm Emanuel as chief of staff and former Sen. Tom Daschle as head of Health and Human Services—but his staff is growing into, to use the fall's other hopelessly ubiquitous buzzword, a "team of rivals" (a la Abraham Lincoln).

To my mind, we can expect the above separatist conservatives to flourish. The reasonable members will find fertile territory in Kos-styled sites; Culture 11, The Next Right, David Frum and the core conservative Atlantic writers have found, or are starting to find, massive audiences. But an Obama administration will prove as beneficial. There will be fierce policy parsing—they are conservatives, after all—but also a respect for a diverse Cabinet and a level-headed President who thinks initiatives through to the end, who respects academic integrity no matter its origin. Here's to the expected lively and intellectual civil war in the Republican Party; here's to the hope that a greater debate is born of it, that we become a country of ideas.