The author offers an Orwellian approach to handling the Deplorables. 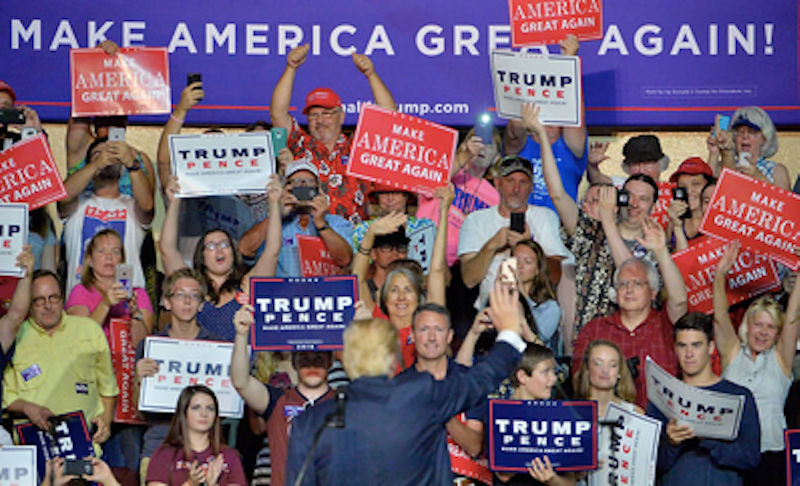 You see the headline —"Trump voters motivated by racism may be violating the Constitution. Can they be stopped?"—and you take the clickbait. You're a Internet rubbernecker, and Noah Berlatsky—the author and a regular contributor to Splice Today—has caused another pileup with his reckless writing. But you can't resist, even though you know that his hypothesis is ludicrous and authoritarian, and that the Leftist polemicist will defend it shoddily. In fact, you ask yourself if he even believes his own premise, however cynical that may sound. Today's journalists have been known to sell "hot takes" to the highest bidder to keep that churn machine running.

You realize that Berlatsky is the political equivalent of the "Maslow's hammer" metaphor. Because he uses a single analytical tool (critical race theory, perhaps), everything he sees looks like racism. But even for such a biased and often bizarre commentator, this NBC News piece is a stretch.

You can't argue with the author's opening statement that Trump incorporated racism into his presidential campaign. His aim, from the moment he announced his candidacy in 2015, was to leave the door open for those white nationalists and "race realists" whom the Republican Party had previously avoided courting. The #NeverTrumpers and centrists this white-leaning expansion of the tent would inevitably alienate were, in Trump's mind, manageable collateral damage.

You see that Berlatsky then claims that MAGA is a slogan rooted in racism, and although you have some quibbles, such an assertion isn't without its merits, unlike everything else that follows. Berlatsky cites Baltimore University School of Law professor Terry Smith's claim that "racist voting is not just immoral, but illegal," and that the government has "the ability, and the responsibility, to address it." This presupposes that the government even has the ability to identify a "racist" voter, but more on that later.

This giant leap into Leftist totalitarianism, according to Berlatsky, merely "sounds" radical, indicating that he has little problem with government overreach, at least when it's reaching the way he favors. You think you're being primed for the argument that the police should be put in charge of sorting out the nation's criminally-minded voters. The Democrats have already tried calling all Trump voters racists, which has only strengthened their resolve, so rather than choosing to "excuse racist voters or try to figure out how to live with their choices," maybe it's time to move beyond shaming tactics and bring out the thought police.

The rationale, according to Terry Smith and Berlatsky, is that courts have already determined that racist appeals in union elections are illegal, and that the National Labor Relations Board can invalidate union elections. Therefore, such authority can be applied to national elections, or perhaps all elections. As for how to legally determine the racist motivations of Trump voters, Berlatsky expresses his opinion that, because the president lied so much during his campaign, voting for him was an "irrational choice." Then, "It's reasonable to conclude that voters were willing to swallow the falsehoods because they liked what they heard: overt racist appeals."

You wonder about being asked to make two leaps of faith for what appears to be a desperation-driven flight of fancy, but then you remember that Berlatsky, a hectoring male feminist with a white savior complex, regularly does things like suggesting that Bernie Sanders is a fascist.

You've gotten your hopes up after reading that Trump voters may be breaking the law, so you're waiting for Berlatsky to actually go there and suggest that the criminal justice system intervene—re-education camps perhaps?—but all he does is echo Smith's point that we must dismantle the aspects of the electoral system that promote illegal, racist voting. Gerrymandering must be ended, voter IDs should no longer be required, and because Democrats can't elect senators in the Deep South (for racial reasons, of course), "Senate districts" should be created, regardless of what the Constitution stipulates.

You feel misled that the author, in the end, doesn't call for legal sanctions on Trump voters themselves. What a letdown. You're used to Berlatsky's verbal trickery by now, but isn't NBC News one of our pillars of democracy that the Democrats wail about Trump calling "the enemy of the people"? The President's fascist-leaning, anti-media rhetoric goes too far, but NBC's doing itself no favors by running a silly article that will only help the guy it despises get re-elected. You're not a Republican or a Trump voter, but you can imagine how you'd feel about the MSM saying your vote for the Democratic candidate is illegal because you're a communist who can't vote rationally.

After finishing Berlatsky's editorial, you realize you've been hoodwinked into reading a Trump Derangement Syndrome fever dream. Then you think that Berlatsky probably doesn't see Orwell's 1984 as a "dystopian" novel. Scary ideas like "thoughtcrimes" and "crimespeak" don't bother him at all, just as long as he's not accused of them. This NBC News article is a crime against cogent thinking, so Berlatsky's lucky that writing it isn't illegal.