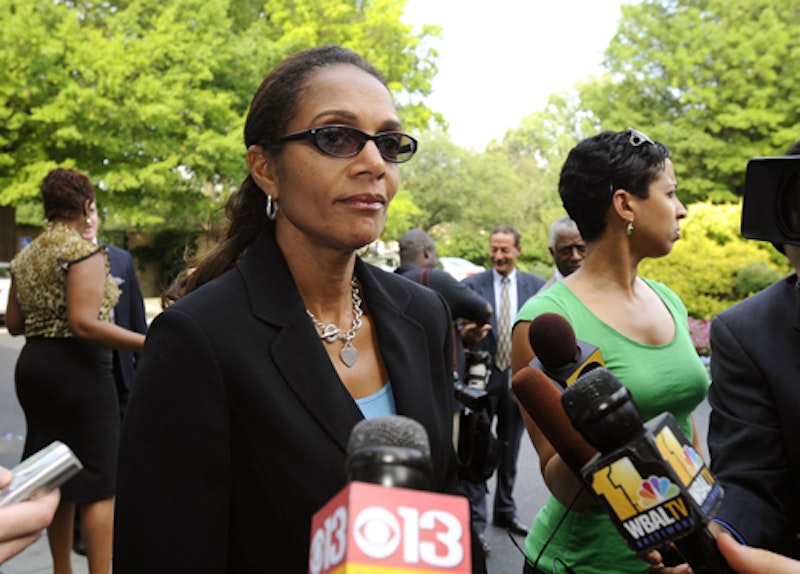 All was well until lover boy Ron Lipscomb decided to talk about Baltimore's Mayor Sheila Dixon.

Then, suddenly, those sweet little oohs! and aahs! and occasional sighs as well as other tokens of affection, become bribes and misdemeanors, i.e., cavorting to urban hotspots such as New York and Chicago, furs, airline tickets, lavish shopping sprees for artisan labels such as Jimmy Choo and Armani, not to mention cashing in on gift cards intended for the needy-a swatch of them paid for by Lipscomb himself. And let's not forget the credit card debt.

There could have been, too, some breathy talk about zoning changes and tax breaks and who knows what else Lipscomb might be telling the state special prosecutor to save his own snitch-y skin. In fact, one of the trips occurred only hours after a beneficial vote when Dixon was City Council president. In politics, pillow talk is a powerful weapon.

Mayor Dixon has been punked. She has been indicted twice now. The first time, in 2008, she was indicted on 12 counts of perjury, theft and misconduct. A judge threw out five of those charges, including perjury. But on July 29, 2009, Special Prosecutor Robert Rohrbaugh, a Republican appointee, withdrew the original indictment and filed a new soft-porn indictment that included the five charges that had already been thrown out by the judge.

The difference between then and now? The priapic Lipscomb pulled the old dipsy-doodle and flipped. He's filled in the blanks with times, dates, circumstances and entreaties. To avoid jail time, he agreed to a kiss-and-tell arrangement to cooperate in the investigation in exchange for a lesser plea to a single count of conspiracy, a $25,000 fine and 100 hours of community service.

For those who've been living on another planet with the Birthers and gun nuts, Lipscomb is head of Doracon Contracting Co., a major player in the downtown development scene representing the minority component in many high-profile projects. The second indictment is much more detailed than the first, largely because the logorrheic Lipscomb is singing long and loud.

At the time of the original indictment, Dixon issued the following statement: "In late 2003 and early 2004, I had a personal relationship with Ron Lipscomb. We were both separated from our respective spouses at the time, [sic] we traveled together and exchanged gifts on special occasions. Our brief relationship was personal and it did not influence my decisions related to matters of city government."
Coincidentally, the special prosecutor also indicted muffin man John Paterakis for violating the state's election laws. To wit: Paterakis and Lipscomb split the $12,500 cost of a poll for Councilwoman Helen Holton. Paterakis' $6000 share was $2000 over the $4000 limit and was not channeled through Holton's campaign committee. Lipscomb is an equity partner in Paterakis' glitzy Harbor East development. But for how long only Paterakis knows.

Paterakis, of all people, should know the campaign contribution laws because he is such a sought-after donor-a total of $10,000 over a four-year election cycle and no more than $4000 to any single candidate. But his violation is a misdemeanor and can be settled easily with a guilty plea and a fine. Paterakis is probably more embarrassed than concerned.

So it's easy to start feeling sorry for Dixon despite the exhibition of tawdry behavior and a cavalier disregard for the rules of office. What we have after three years is a series of petty misdemeanors, cheesy antics, to say the least, but surely not worth all of the commotion they're causing. Trouble is, Dixon has a rap sheet that follows her around like tin cans tied to a dog's tail: the shoe-banging incident as a City Council member; padding the municipal payroll with relatives in violation of the city's ethics laws; awarding a non-bid contract to her campaign manager; serving as her sister's keeper, often on the city's dime; and the U-Tech imbroglio.

There's the serious question, too, of whether the special prosecutor can actually re-introduce charges that have already been dismissed. It may not be double jeopardy, but it seems pretty close. Beyond that, Dixon apparently did not report the gifts, as required by the city's ethics law, over the past seven years, according to reports. Maybe it's time-and there's no time like a budget crisis-for the General Assembly to begin questioning the efficacy and the effectiveness of the special prosecutor's office as it threatens to do from time to time.

The record of the office has been less than spectacular. It lost the case against former State Sen. Larry Young (D-Baltimore.) The Assembly has kept the office on a notoriously short leash since it was established in 1976, mainly because one of its responsibilities is to investigate misbehavior by members of the legislature.

The issue was born during a string of embarrassing indictments in Maryland-Spiro T. Agnew, Dale Anderson, Joseph Alton, Marvin Mandel. The thinking at the time was that Maryland ought to have the ability to clean up its own messes instead of having the federal government step in and embarrass the state. (The FBI, not the state prosecutor, initiated the current investigation of State Sen. Ulysses S. Currie (D-Prince George's.)

Even then, the Assembly had twice rejected the proposal to create the office before it finally ducked the issue by sending it to referendum despite the state's strict prohibition against legislating by plebiscite. The office was opposed by the attorney general of the moment, Francis B. Bill Burch, and most state's attorneys. And in drafting the ballot issue's language, the legislature deliberately excluded the two most persuasive tools of a prosecutor-subpoena power and the authority to grant immunity. Only in later years did the legislature grant the prosecutor subpoena power. The fact is that the special prosecutor lacks the tools that are available to federal prosecutors and even local state's attorneys.

The state special prosecutor is appointed by the governor to a six-year term. The term of Rohrbaugh, appointed by former Gov. Robert L. Ehrlich Jr. (R), expires in 2010, when Gov. Martin O'Malley gets to name the replacement if he chooses. It's foolhardy to second-guess a judge and a jury. But there are very few people hereabouts who believe the special prosecutor can actually win a conviction of Dixon if a jury trial is held in Baltimore, if it gets that far, because of the city's racial composition. Besides, bribery's very difficult to prove, as is its handmaiden, intent, and it'll be Lipscomb's word against Dixon's.

What's more, the short-staffed, under-funded, politically appointed state prosecutor will be going up against a team of the city's top criminal defense attorneys. Dixon's attorneys have accused the special prosecutor of abusing the grand jury system by subpoenaing witnesses after the indictment. And the special prosecutor has complained that Dixon's legal team is belittling his office by referring to his staff as "minions," according to reports.

And the second most frequently discussed topic is how Mayor Dixon, on a salary of $150,000 per year, will pay the legal costs of such a drawn-out dog-and-pony show. One established method of defraying the expenses of lawyers and a trial is for friends of the Mayor to set up a blind trust, or a legal defense fund, over which she theoretically would have no knowledge or control. The most titillating yet unanswered question is this: If Dixon's lawyers would let her talk, what would she say about Lipscomb?