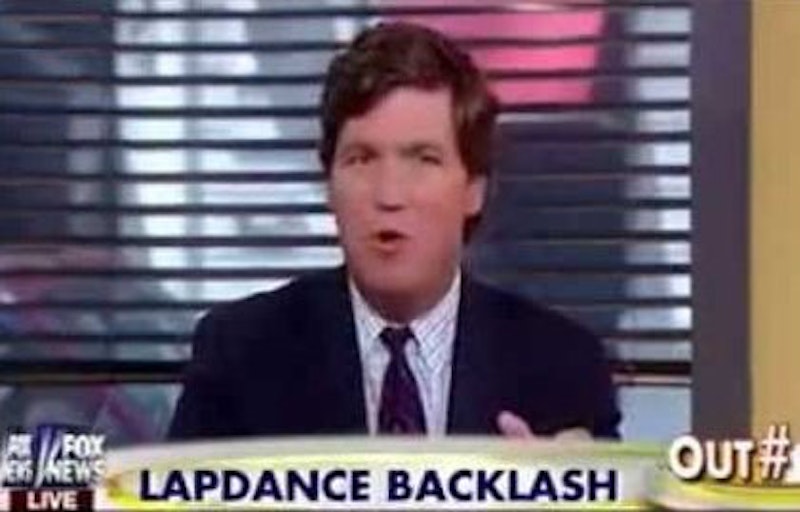 Recently, Fox News’ Tucker Carlson said it’s “awesome” when teachers sexually harass young men. Carlson, founder of The Daily Caller, revealed his troubling thoughts on student/teacher sexual relationships by stating that being sexually assaulted by a female teacher is “the greatest thing that ever happened,” to teenage boys.

Carlson’s comments stemmed from the arrest of a 42-year-old Texas middle school teacher who was arrested for giving a 15-year-old student a lap dance. After putting his foot in his mouth, Carlson continued: “The women are upset, and the men understand. But here’s the bottom line: a 15-year-old boy is not a 15-year-old girl. Every man understands this. A 15-year-old boy looks at this as the greatest thing that’s ever happened, and I think for a 15-year-old girl it would be traumatic. That’s just real. I don’t know what to say. I don’t want it to be true, it just is true.”

Carlson’s statements reminds me that this is a world where it is still only socially acceptable for girls to play with Barbies and boys with toy cars. The 45-year-old says he knows that it is “true” when it comes to how young men feel about being touched inappropriately, although Carlson has not claimed to have any first-hand experience. Then again, working for Fox might make anyone think they’re correct all the time. What’s true is that according to a study conducted by the U.S. Department of Justice, as many as one in three girls and one in seven boys will be sexually abused at some point in their lives. Although not every sexual harassment charge listed in this statistic is linked to student-teacher relations, you’re left wondering what would make being sexually abused by a female teacher any different than, say, an older female the victim knows outside the classroom.

Carlson fosters the fossilized idea that sexy school teachers are the fantasy of most young boys. What he fails to realize is that only 30 percent of sexual harassment is actually reported, and much more often this “fantasy” is actually a nightmare for the victims. In the article “Culture, Power, and Sex Collide,” Linda Martin Alcoff explores the idea Carlson has put into the minds of his viewers: that what constitutes rape is relative. In the piece, Alcoff explains, “Harassment and even rape is cloudier than this: date rapes, statutory rapes, and many instances of harassment can be subject to multiple interpretations, which has given rise to the new term popular on college campuses—‘gray’ rape.” The ideology that student-teacher relationships are only considered rape if it’s between a female student and their teacher makes all other male/teacher relationships seem “gray.” If this were the case, no boy would feel safe coming forward with his feelings of disgust and hurt.

According to the Office of Sex Offender Sentencing, we live in a society where only 30 percent of rape cases go reported. And there are even fewer statistics based on male rape cases because we live in a society where men are taught that they can’t be raped. In a piece entitled, “The Persistence of The Lolita Syndrome”, Andy Martin explains his belief that society has a fascination with “the sexual awakening of schoolgirls” due to the idea that there is a whole artistic genre devoted to the subject. I say schoolgirls because boys are often dismissed from this discussion. It’s expected that boys become sexually awakened at this age, whereas for women, it’s fetishized. This ideology sticks with young men as they grow up, and when they do experience sexual assault, the result is guilt and silence.

Recently, in Reading, PA, middle school teacher Jessica Saienni was arrested and charged with having sexual relations with her 14-year-old male student back in 2012. Saienni acquired the boy’s phone number after a field trip and began texting him sexually explicit things—just as his 14th birthday approached. Upon their third meeting, they ate birthday cake and had sex in Saienni’s car.

Was this boy taken advantage of less than a girl would’ve been in a similar situation? Was this supposed to be romantic and sexy and special between the two? When I was 14, I thought going mini-golfing was a romantic outing. At 14, you don’t know what is romantic attachment and when you’re being manipulated. A boy is just as unlikely as a girl to be able to tell the difference.

In 2007, Allenna Ward was arrested for having sex on campus and in motels with no less than five boys from her classes. If these boys were grateful for their sexual liaisons, then it seems unlikely that they would step forward and take legal action. Tucker Carlson’s statements perpetuate a society in which only sexual abuse towards boys from men is disgraceful; this homophobia that’s seeping under Carlson’s remarks silence boys who’ve been assaulted and breeds a culture where men are seen as sexual creatures and women are seen as victims.