Me and My Typewriter, Hitler and His Damn Reich

Sometimes you have to take a step back. 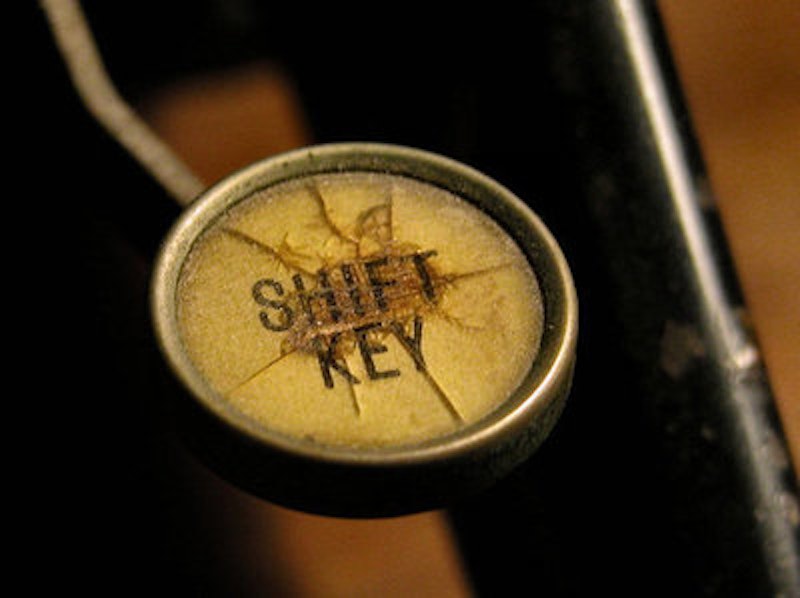 When I was 13, I got in a jam with my typewriter. The really bad thing was that the typewriter worked fine. I was stuck, not the machine. I’d been typing a paper for junior high and couldn’t figure out why the underline didn’t appear when I hit the underline key. Minutes passed, more than a few. During this time, I kept hitting the same key. I tried it over and over. In fact, I did nothing else. The conflict between me and the underline filled my head. I was doing what everyone else did. I was pretty sure I was doing what everyone else did. But the thing would not appear. There was no other key with an underline on it. What was everybody else doing?

After, I don’t know, 20 minutes, I hit the shift key and the underline key. The underline appeared. The 20 minutes are a guess, of course. But I didn’t fumble for a moment and then fumble again and then let common sense dawn. I passed a solid block of time malfunctioning in front of my typewriter. An onlooker would have asked what sort of fit was happening to me. But there wasn’t any fit. I was happening to me.

Somebody else might have leaned back and taken a look at the keys. The idea would’ve been to look over what was available. I didn’t look until I was desperate, and that’s because I don’t see the keys—or anything—as being there for my use. They’re there to trip me up. They are things that I have to figure out in order to be competent. The more of them there are, the less chance I have of being competent. So I con myself that the few things I get under control are all the things that I need. For example, I could put the paper in the machine, line it up kind of even (and that was probably 10 or 12 minutes right there), hit the return when it was time for a new paragraph, hit the right keys for the right letters, hit the shift and the key when I wanted a capital. Hit the shift and the key… Hey, wait, idea.

Before my breakthrough I endured a solid stretch of pain. The world gathered itself between my shoulders and settled its weight. The interior of my head was black and hot. Life was proving something to me and it wasn’t fair. I was hitting the same key everyone else hit, but for me it was no good. I didn’t have a hope.

Gosh, those 20 minutes would’ve been much happier if I’d just looked at the shift key! But that would’ve meant more complications, more things to fail at. Really, I couldn’t imagine a future stretching ahead of me in which new things succeeded each other and I had to figure them all out. But that’s the future I’ve lived, like anyone. I still feel like life can’t be rigged that way. But it is and I’ll never get used to it. I’m not the sort.

DVD corner.  If you want to see a nightmare, try Downfall (Der Untergang, 2004). That’s the movie with the screaming Adolf scene that has been home to so many funny subtitles. But the jokes work because the scene itself is so convincing: tell yourself that isn’t Adolf Hitler having a breakdown. The scene is typical of the movie, one that reproduces the dictator’s last days with terrifying skill. When a dream gets bad enough, you glance about for signs that it isn’t real. All right, in Downfall the supporting actors, and especially actresses, tend to have movie-quality bone structure, and the women’s hairdos keep their shape even as bloody hell descends. Maybe experts could find other details to fault. But when watching the movie, I believed everything happened just the way it was shown. The effect was like living somebody else’s anxiety dream. He had been found out, life had no use for him after all. The very worst was happening at last.

Hitler arranged to live this particular dream, and people good and bad signed up to live it with him. I guess most of them got what they had coming. But the exceptions make the mind squirm. Down in the bunker, Hitler’s poor secretary dashed along corridors and slammed doors. Her mission: keep Joseph Goebbels’ little children from seeing anything too awful as their dad’s nasty empire coughed up its guts. Silly, I guess, especially since the kids’ parents then killed the children. But I hope I would’ve done what the secretary did, and I might have on one of my good days. She was having one of hers, and she was there in Hitler’s bunker by choice, because she believed in him.

Deep into the movie, watching the doors and corridors, seeing the secretary desperately racing from one room to another, I began thinking about farce. I suppose I just wanted to lighten my emotional load. But somebody daring might map the bunker onto Fawlty Towers, or vice versa. In a sense, isn’t Hitler just a shorter Basil Fawlty, one with bigger ideas? Both of them are caught up in trying to make stubborn things—hotel guests, Europe—fit rigid notions. I did the same, I guess, at my typewriter when the underline key wouldn’t submit, which is a scene I’ve lived out too many times in my life. As people the three of us boil down to a similar premise.

In another sense, of course, Hitler took over countries and killed millions of people. Basil and I just get into foolish fights with troublesome everyday entities. For the most part we’re not out to harm anybody and we don’t harm anybody. It goes to show that execution really counts with an idea.