A first hand account of the protests outside the New York Stock Exchange. 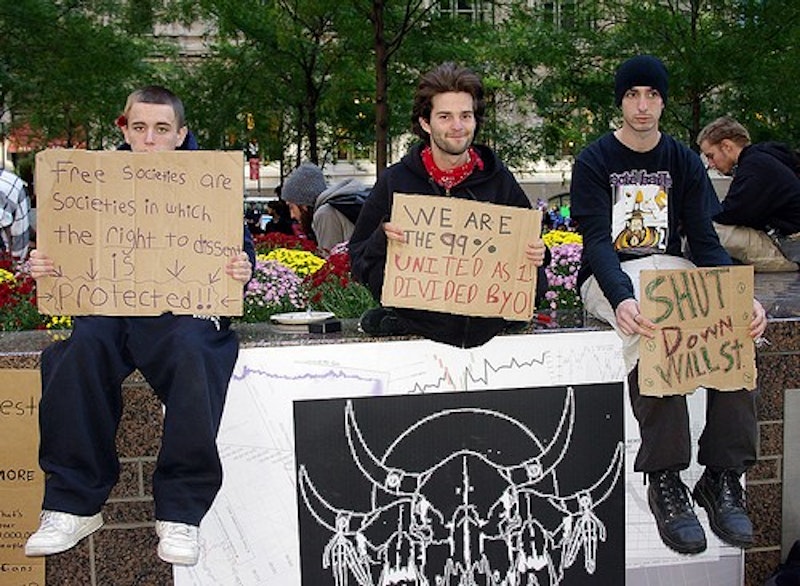 For months, every time I passed the New York Stock Exchange, I wondered why people weren’t rioting in the streets. Do Americans not realize that Wall Street has completely hijacked our government and economy? Do they not understand that the corporate elites who have trashed the global economy now have more wealth and power than before the financial crisis? Finally, people are starting to fight back. The protests rocking the financial district the last couple of days could be a significant spark, and they offer much hope.

On Saturday, a friend of mine was in the financial district. He called me because he thought there must have been a terrorist attack or something. What do you mean, I asked. He replied that the area was swarming with cops, the Stock Exchange had been barricaded, and nobody was allowed to enter. A couple of minutes later he told me protestors were the source of the security crackdown.

Upon hearing this I immediately headed out to see what was going on. When I arrived at the Stock Exchange, sure enough the police presence was massive. Rows and rows of cops were lined up in front of the barricades and across Broadway, as if they were bracing for a war. But there were no protestors. I asked a guy selling some food what was happening. He said he had no idea. Then I approached a security guard and asked where, if anywhere, the protestors were. She said they had gone further down Broadway and pointed me in the right direction.

A couple of minutes later, I found a big crowd of people, mostly young, in nearby Zuccotti Park. There was a lot of excitement and tons of banners bearing messages decrying corporate domination, such as “Capitalism Doesn’t Work” and “We are the 99%.” Hundreds of people had gathered to discuss their grievances with a system that has abandoned them. Most young people nowadays have to suffer from crushing debt burdens if they want to pursue an education. Unemployment among America’s youth is scandalously high. And these kids understand who is responsible for their lack of a future. They know it is up to us to reclaim our democracy, because the political system has devolved into pure theater.

After spending a few hours discussing issues in groups and then in a broader general assembly, we hit the streets. We approached Wall Street and marched around the barricades, getting as close to the Stock Exchange as possible. We were extremely enthusiastic. We made a lot of noise. We held up our banners for all to see. And we invited as many onlookers to join us, since we are the voice of a nation that has been hijacked by corporate power. The police presence though, was extremely intimidating. When all of us had gathered in front of Cipriani for a few minutes, dozens of cops wielding guns and nightsticks surrounded us. They appeared ready to pounce on us at any minute. Some protestors with more experience rallied the crowd to keep moving, lest the cops fence us in and start arresting people—a prospect I was bracing for.

So we moved on. But our fervor and determination has not abated. We spent the rest of Saturday and much of Sunday continuing general assemblies in Zuccotti Park and marching through the streets. On Monday night hundreds of us rallied, declaring, “All day, all week, occupy Wall Street,” and “This is what democracy looks like.” Most bystanders waved to and smiled at us. Some joined our ranks. Not surprisingly, a huge police force followed our every move. They have arrested a number of people, inflicting a gash on one protestor’s leg, knocking a tooth out of the mouth of another, and potentially murdering a third (see footage: https://occupywallst.org/).

One of the favored chants is “Whose streets?  Our streets.” The corporate elite may privately own these streets. But we are here to reclaim them, along with the rest of America, for the people. There is much confusion about what our agenda is. It is actually very simple. Democracy. The spirit of democratic governance underlies and permeates all aspects of this burgeoning movement. We seek consensus before moving on to another topic at our general assemblies. We listen to each other, repeating what every speaker has to say, sentence by sentence. The point is, we are sick and tired of being ruled by a shadowy and exclusive group of oligarchs. And we will stay all week to get our message out.

Please join us. Every person counts. Every act of resistance matters. If you can’t make it, tell people you know in New York City about the protests. Follow us online. Send donations to help us continue. We are the only line of defense left against a corporate state that will destroy civilization if it is not stopped.