Troy Davis' execution is the latest in a series of travesties demonstrating the haphazard application of capital punishment. 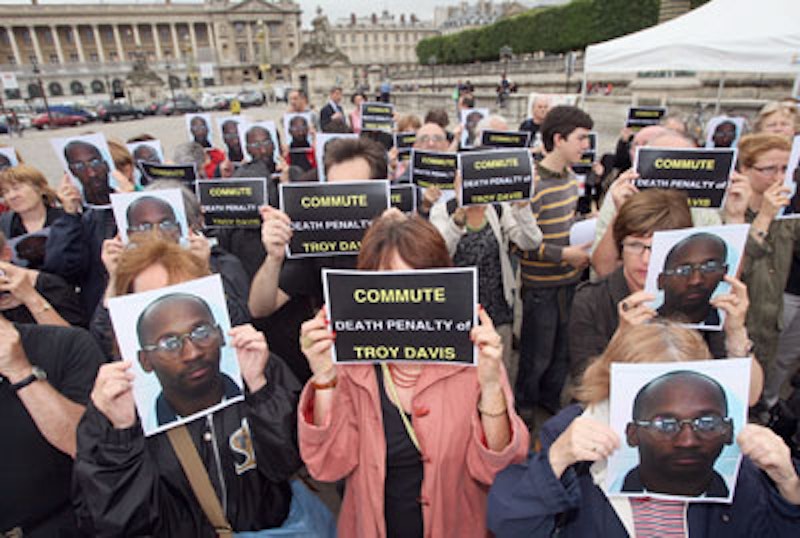 America’s on a killing spree that even Pope Benedict, Jimmy Carter and more than a million petitioners can’t stop. Troy Davis was given a lethal injection after four previous court delays and a final four-hour reprieve before the Supreme Court decided to let him die. On the same day, Sept. 21, there was another execution in Texas, the 236th and the second in the state within a week. The next day, Alabama executed a man for killing a store clerk in 1994, the third killing by a state within seven days. Last week, Virginia snuffed out the life of another death row inmate. And while Davis spent his last day in a Georgia prison cell, a judge in Anne Arundel County, Maryland, halted an execution in a state where the death penalty is on indefinite hold in a standoff over protocols for administering the deadly cocktails.

Davis’ case became an international cause as well as a cosmic outrage, partly because of vehement opposition to the death penalty and in large measure because the charges against him appeared to collapse into doubt and disbelief. Not only did the Pope and the former president join ecumenical hands in seeking clemency for Davis, who was convicted of killing a Georgia policeman, Mark MacPhail, though he maintained his innocence to his last breath. But Former FBI director William Sessions and the former warden of the prison where Davis lived out his last days questioned the substance of the case after seven of nine witnesses recanted their original testimony or claimed they were coerced by police, casting new and serious doubt on eyewitness testimony.

Both Sessions and the warden said that there was too much doubt to proceed with the execution. In Texas, a white-supremacist gang member was executed for the 1998 dragging death of a back man, considered one of the most outrageous hate crimes in modern times. The perpetrator of that brutal crime, Lawrence Russell Brewer, was able to stay alive through 13 years of appeals and even bragged, at the end, that he’d “do it all over again, to tell you the truth.” Even though Davis ultimately died, his case was the third death penalty case stayed within a week. Death and taxes may be the only certainty in life, but the death penalty assuredly isn’t if a condemned criminal has the chops and the lawyers for appeals.

In Maryland, the death penalty has been virtually non-existent since Republican Gov. Robert L. Ehrlich Jr. left office in 2007, and before that when Democrat Parris Glendening, as governor, suspended capital punishment while it was under study by a commission. The suspension was essentially a campaign gift to Lt. Gov. Kathleen Kennedy Townsend (D) who requested the moratorium as a counterpoint to her election-year opponent, Ehrlich, who allowed the last execution in Maryland while he was governor (2003-2007).

Maryland Gov. Martin O’Malley (D) is opposed to the death penalty. Since he became governor in 2007, several attempts to repeal capital punishment—including a bill that O’Malley sponsored—have narrowly failed. In addition, the Maryland Court of Appeals had ruled that the protocols for administering lethal injections where improperly drawn, and since then the revised protocols have ping-ponged between the governor’s office and the General Assembly and continue to await legislative approval. The Assembly has, however, tightened the rules of evidence in an attempt to eliminate potential errors and the condemnation of innocent persons.

Meanwhile, there are five prisoners languishing on death row in Maryland at a cost of about $50,000 a year each, one as long as 20 years while lawyers continue to file appeals, few of which have anything to do with innocence or guilt but with issues such as child abuse or collapsed veins which, they claim, would constitute cruel and unusual punishment if a lethal injection is attempted. Several years ago, it was estimated that the state had spent at least $4 million defending the death penalty against appeals, some frivolous and others raising serious issues, an embarrassing waste of precious state resources. That's $4 million that could be spent for textbooks for tots or re-training for the jobless.

When a condemned inmate can stay alive through 20 or more years of appeals, there’s something fundamentally wrong with the law and the way it is applied. Either use it or lose it, sensibly the latter as long as there is doubt. And when there is a lack of uniformity across a nation with 50 separate states, there is also a chink in the basis for the law. Murder a person in Michigan, Maine or Wisconsin and get life with three square meals a day and probably an exercise room and television time for good behavior. But gun down a citizen in Texas and Gov. Rick Perry (R) gets to brag on television that he killed the perp and the Tea Party audience applauds. But hey! Perry knows where he’s coming from. Polls consistently show that more than 60 percent of the bloodthirsty American public supports the death penalty, especially in murder cases, and an equal number believe that it is not applied frequently enough. In an age when drug deals gone sour are resolved with Uzis and other lethal means, the death penalty is no longer a deterrent as it is frequently argued to be. If that were the case, why, then, is the murder rate so high and the number of recidivists higher than the Ozone layer? The food in prison can’t be that good.

It’s about time to end the indiscriminant taking of life by the state(s) if, for no other reason, than the system of capital punishment is a malfunctioning method of seeking to apply justice when, in fact, the end result is injustice in its haphazard application across 51 independent duchys that are united, in this case, in name only. But even the Pope, with the assist of divine guidance from a higher authority, can’t wish the death penalty away as long as Rick Perry and his ilk hear the roar of the Tea Party crowd and the voice of the people in the polls.