The Cutest Man in Texas

Rick Perry reminds us that these days a big strong man is a lot like a sweet little woman. 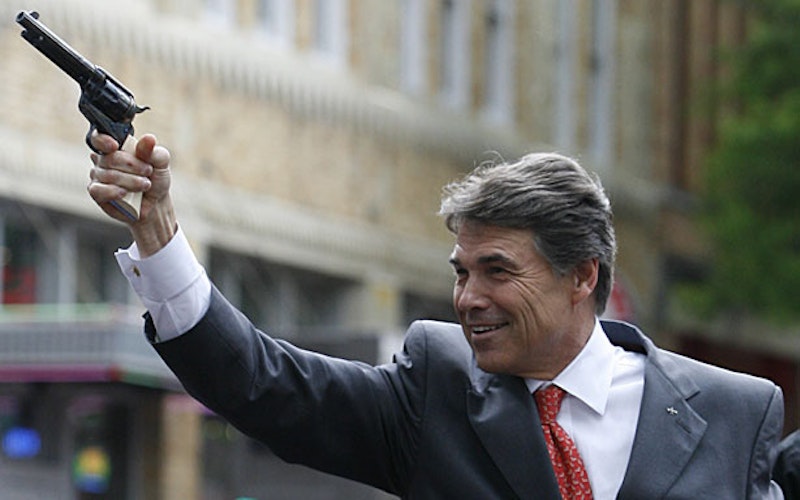 Rick Perry waggles his eyebrows and bobs his head more than any other candidate for president. Ronald Reagan had a powerful degree of charm, but you never thought his eyelashes might bat. Perry’s whole body bats; standing at his podium during a debate, he’s possessed by an undulating wiggle that causes his shoulders to kiss the air. Yes, he does the hard-jawed grin and the straight-into-the camera-talk-about-freedom stuff, but that’s expected: He’s a tough guy, or so we’re told. The surprise is how much cuteness can go along with being tough.

He’s rugged, but in a way that involves the width of his shoulders and the position of his hips when he walks and the way he bites down on a syllable (“po-tinn-shull” for “potential”). Perry says he shot a coyote, but no one else was there and we’ll never see any proof. One sure thing: Shooting a coyote seems about as outlandish to Perry as it does to everyone else. That’s why he thinks the story is worth talking about. Perry is 61 years old and a lifelong gun handler in Texas, purportedly the world’s most badass slice of governed territory. But killing one coyote during that whole stretch of time is still a big deal to him.

Perry’s toughness is all about the vibe. Fans don’t say that he climbs mountains or muscles people around or withstands great amounts of physical pain. They don’t expect him to. He moves like a redneck tough guy and talks like one, and that’s enough. YouTube shows us  that he’ll touch an imperious finger to a college student’s chest (“You gonna let me answer?”) or hassle a female cop when she stops his van for speeding. “Why don’t you just let us get on down the road?” he says, gruff. But the cop sticks to her guns, and his follow-up turns out to be nothing at all. He spins around, stalks off to wait in the van while his aide deals with the mess. You might say he flounces, except that his shoulders are square and his legs straight.

Nowadays, what with technology and bureaucratic society, there isn’t so much a big guy can do that a small woman can’t. Being a tough guy has become a matter of style and not much else, and Perry does have to be recognized as an accomplished performer in his idiom. Note his sure use of underplaying. He comes on strong, that’s the point of the performance, but he underlines the performance through contrast. The straight finger that lands on the student’s chest touches him there gently. The “you” in “Why don’t you just let us get on down the road?” is punched home by a mini-drop in volume; instead of going up, Perry lowers his voice for the second the word is spoken, then deftly swings back to his barrelhouse attack. He’s thought all this through in some secluded lobe of his brain: When you invade, a hint of quiet and ease just shows that you’re at home, that the other person’s space is your space.

Then there’s Perry’s cheerleader side, which is far less modulated. This may be because pep doesn’t call for nuance, just an audience that wants to shout. What matters on the performer’s side is a willingness to go all out and get them in a good mood. Perry caused some alarm with a recent speech in which he was so loose and rambunctious that Internet viewers thought he might be drunk. Hell, the man just wanted to please.

The same desire is underlined by his winsomeness. Watch Perry during an interview or public announcement and you’ll see him tilt his head and widen his eyes; he squeezes out coy smiles that hint at a shared understanding with the audience. “I’ll champion the Constitution’s 10th Amendment, which is supposed to keep Washington from messing with Texas,” he says, with a head bobble on “supposed.” He’s inviting us to be puckish with him about Washington’s perennial need to mess. It turns out that tough rednecks can be a bit coquettish.

George W. Bush pulled his share of the same tricks. Not just walking with hips out and shoulders wide, and attacking syllables like he wanted to clip and save them, but doling out straight-faced jokes and the like. The two fellas could be companion items offered by a retailer specializing in the sale of white-collar good old boys. Bush would be listed in the catalogue as Ash Gray, the darker Perry as Autumn Mesquite. The big difference would be Perry’s wavy forelock, which frolics atop his brow and waves for attention. The lock signals what Bush’s tighter haircut kept quiet: The man below this hairline is here to charm you. With the forelock in view, it’s no surprise that Perry’s eyebrows do their dance when he talks about the Texas business environment, that they wiggle and bounce and show ever-growing and shrinking intervals of skin between themselves and Perry’s eyes. Perry shows how cutesy-poo the ol‘-boy act can get and still remain recognizable.

None of this bothers anyone. The big question mark against Perry is his disordered verbal-response center, his knack for generating video clips in which he looks like he has been hypnotized by a small spinning ball just out of camera range and must fight its influence while he discusses Mitt Romney’s misdeeds or the value of teen abstinence or what he’s been doing in office. “I do have a pretty, um… a track record when it comes to taxes,” the Governor says, and the ellipse covers four complete seconds. He spends them with chest angled toward the microphone and eyes facing straight into emptiness. Then the phrase shows up; at last he can move. His hands leap from the podium’s sides, try to ring in the phrase so it can’t escape. He’s made a decision: “Track record” must stay right there, near his shirtfront.

Again, Bush showed a similar knack for radiating anti-verbal stupidity. But Donald Rumsfeld and other walking disasters of the Bush era had a wonderful verbal command. What they shared with their boss was a weakness for he-man fantasy. That was the administration’s fatal flaw, and Perry has it too. People don’t notice because being a white-collar he-man is chiefly a matter of gesture. He’s there to remind ordinary men that the deluxe version of themselves is still a possibility. But he himself isn’t that deluxe version; if he were, he’d have shot plenty of coyotes. Perry is there to act a part. That’s why some desperate Republicans decided that this little-known timeserver ought to be the next president. He puts on the show they need, and the only flaw they now see in him is that, apart from doing his good-ol‘-boy act, he isn’t as good at performing as they thought.

The world is too much for the American right. Their agenda is to get away from it all, this squalid reality we inhabit where soldiers can be gay and the Ayn Rand approach to bank regulation produces catastrophe. They want to soothe their jangled nerves with a performer who lives to make them happy. The man with the shoulders, the drawl, and the widened eyes is their solace. Like our last president, the right’s latest artificial tough guy is best understood as an American geisha.